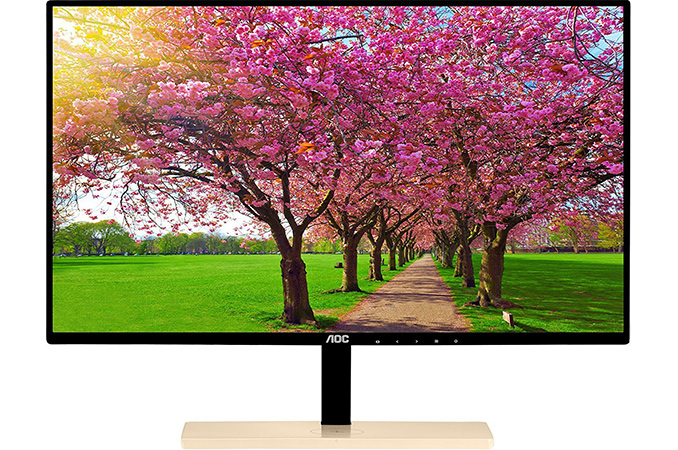 AOC has introduced a new 27” display that features Qi wireless charging for mobile phones in the base. The monitor uses a PLS panel and has standard characteristics for a mainstream device aimed at office environments. Despite this, the P2779VC is one of the first 27” displays with Qi wireless charging and it will make an appealing option for those who need both large screen and Qi, especially given its affordable price.

The AOC P2779VC is a 27” IPS monitor with a 1920×1080 resolution, 300 nits brightness, 178°/178° viewing angles, and a 60 Hz refresh rate (static contrast ratio is unknown). The display is listed as reproducing 16.77 million colors, enough for office workloads, and has a response time of 5 ms gray-to-gray, enough for videos and gaming. AOC does not confirm adherence to any particular color space in its spec sheet.

When it comes to connectivity, the AOC P2779VC is a fairly basic monitor with one D-Sub and two HDMI 1.3 inputs. Unlike some other mainstream displays, this one does not have built-in speakers or a USB hub which may be an advantage for tightly-packed corporate offices that have to deal with noise (minus speakers) and mind corporate security (minus USB).

Meanwhile, the key selling feature of the P2779VC is its base that features a Qi wireless charging pad in the base. As far as we could find, commercially, only Samsung has released two SE370 displays that support Qi and feature 23.6” and 27” PLS panels. As a result AOC’s monitor is not going to have too many rivals right now. Keep in mind that at present there are tens of smartphones and tablets with integrated Qi wireless charging technology (including those from ASUS, Samsung, Google, HP, Microsoft and other) and there are accessories that enable the tech on devices without integrated support (e.g., on Apple iPhone 6S).

The AOC P2779VC comes with a black or gold base and with the company’s standard three-year warranty. The price of the display is $199.99, which is a bit lower when compared to the price of the Samsung SE370 270 that is available for $213.80.