To match the launch of Intel's 8th Generation Core launches this week for mobile, HP is the next partner making some noise with new launches. Almost every cylinder from HP for today is set towards the ZBook line: ZBook Studio, ZBook x2, and ZBook Workstations. As a cherry on top, HP is also announcing a new DreamColor monitor.

HP has announced updates to the ZBook Studio mobile workstation and x360 convertible laptops to the latest 8th Generation Intel processors. Also in the update list for the Studio line are improved screens using HP Dreamcolor displays, and improved chassis materials. The ZBook Studio and Studio x360 are part of HP's premium line of mobile workstation products which are promoted to offer creative professionals, executives, and students, the right level of performance and power without compromise on design and mobility. 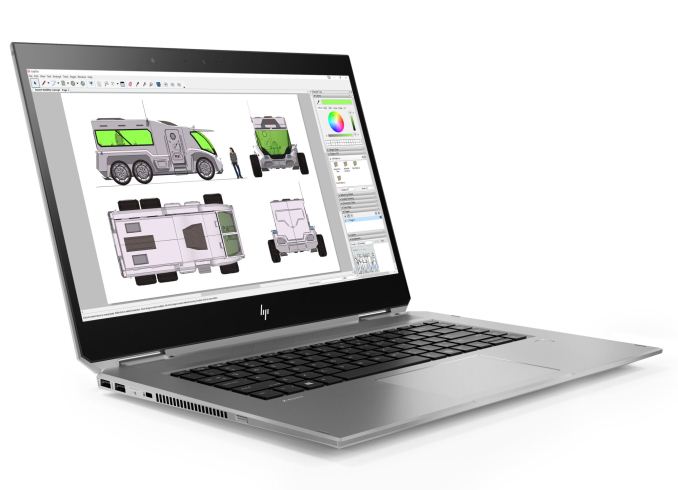 The ZBook Studio x360 will be available with a choice of one of four 8th generation Intel processors or one of two Xeon-E series CPUs. HP says it that the options provided can give up to 35% more performance than an Apple MacBook Pro. Memory capacity is up to 32 GB across two SO-DIMM slots - if a Xeon CPU is selected, DDR4-2666 ECC RAM will be used. Graphics options range from the internal GPU on the CPUs to a discrete NVIDIA Quadro P1000 4GB GDDR5. The integrated graphics chip is the Intel UHD 630 on the Core processors and the Intel UHD P360 on the Xeon processors. With this, HP says the x360 is the most powerful convertible laptop in the world.

HP gives users four-panel options on the x360 with all being touch screen enabled.  Options range from Full-HD (1920x1080) IPS with panels at 400-nits, up to 4K UHD (3840x2160) IPS panels with 650-nits of brightness in a Dreamcolor display able to produce 1 billion colors. HP states that this is the brightest 4K laptop display for this screen size. The screen is rated to produce 100% Adobe RGB and include a built-in color calibration system in addition to an ambient light sensor which will dim or brighten the screen based on the environment. In addition, two panels also include HP SureView for screen privacy. The x360 is compatible with the Wacom AES pen featuring 4000 pressure sensitive levels as well as tilt and and two customizable buttons for inking precision. Battery life on the X360 is rated to last up to 16 hours and has a fast recharge capability of 50% in 30 minutes. A full workd ay on battery power seems possible with some setups. 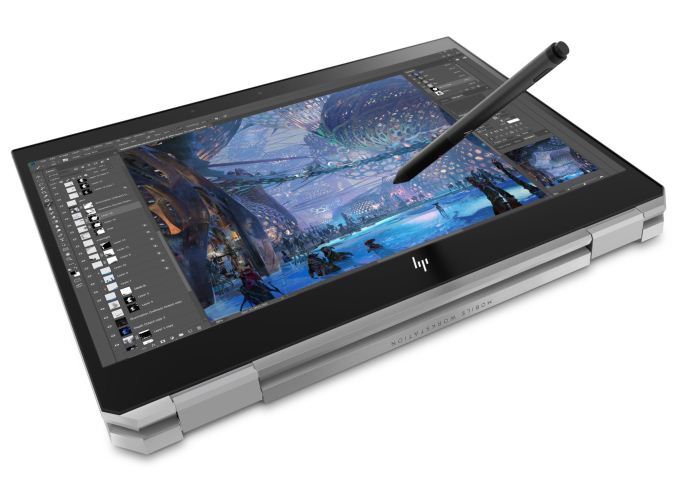 On the networking and connectivity side of the house, the x360 uses the latest Intel Wireless-AC 9560 found integrated on the chipset with the appropriate CRF. The Intel 9560 comes in two flavors, a vPro version, and non vPro. In addition, the x360 also has mobile data capabilities through HP lt4132 LTE/HSPA+ 4G mobile broadband module or an Intel XMM 7360 LTE modem. Port connectivity includes two USB 3.0 ports (one with charging capabilities), a HDMI 2.0 port, a headphone/microphone combo port and two USB 3.1 Type-C Thunderbolt 3 ports which support DisplayPort 1.3.

The chassis of the x360 is made from precision architected aluminum which HP claims to be more durable, sleek, and aesthetically pleasing. Updates to the hinges allow the x360 to freely move around in five modes without any pressure on the wrist or the arms. The full-size HP Collaboration keyboard has a fully integrated lattice (adding rigidity), is spill-resistant, and backlit. The idea behind the collaboration keyboard is that hosting virtual meetings can be made due to additional shortcut keys along the top of the keyboard, with a world-facing 3rd microphone and optional webcam. HP uses four custom tuned Bang & Olufsen speakers and a discrete amplifier to set the stage for improved sound over the previous generation. 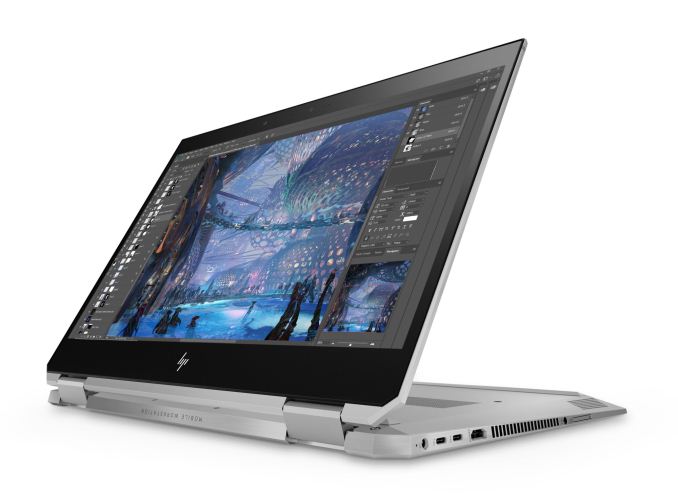 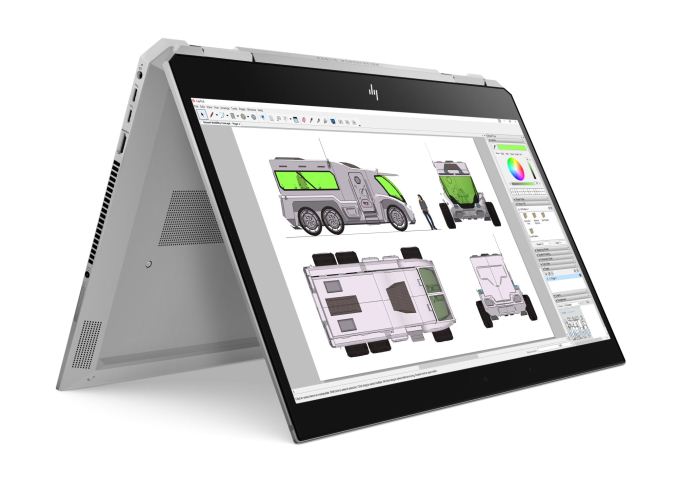 The HP ZBook Studio x360 will be available in May/June with a starting price of $1499.

The HP ZBook Studio is also part of the premium ZBook family at HP and with that, is part of the improvement they wanted to make in bringing features normally found in higher-end lines and bring it to this level. HP says the ZBook Studio also has the brightest 4K laptop display, has improved the sound, and is smaller than the previous generation Studio. 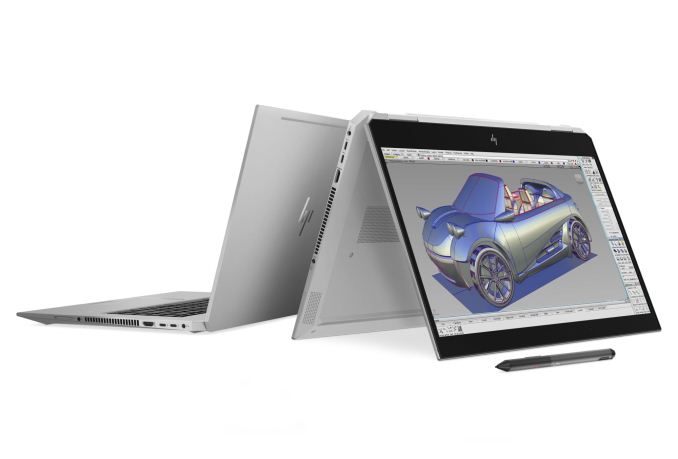 The major differences between the Studio and Studio x360 have to do with how the device can be set up. Whereas the x360 has five modes including tablet, clamshell, presentation, tent, and a docked configuration, the Studio has four with tablet mode not being possible on this device. Outside of that, about the only difference between the two comes with the storage options, audio, and 4G LTE capabilities. Both do have self-encrypting drives (SED) and drives which follow the Federal Information Processing Standard (FIPS) 140-2 standards established by the National Institute of Standards and Technology, except the Studio has more storage choices (more spinning rust options).

Both Studio devices use 8th gen Intel processors, can handle up to 32 GB or ECC or non-ECC RAM (depending on the processor), have the same panel options, and will use the same integrated GPU and discrete NVIDIA Quadro P1000 4 GB GDDR5 graphics card. 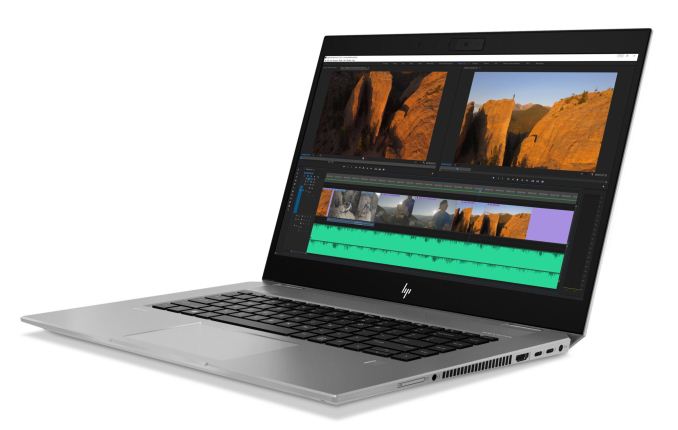 The HP ZBook Studio x360 will be available in May/June with a starting price of $1299.