SilverStone’s Nightjar NJ450-SXL definitely is a unique PSU in both practical and aesthetic terms. Its chassis is essentially a large heatsink and there are no air vents anywhere to be found. The chassis is 130 mm long, which does not fit the standard 125 × 63.5 × 100 mm / 4.92 × 2.5 × 3.94 in (W×H×D) SFX form factor dimensions. SilverStone designates these PSUs as “SFX-L” units and caution is advised as they could be incompatible with compact cases designed to just fit a regular SFX PSU. It also tips the scales at slightly over 1.5 kg, making it significantly heavier than any similarly-sized conventional PSU. 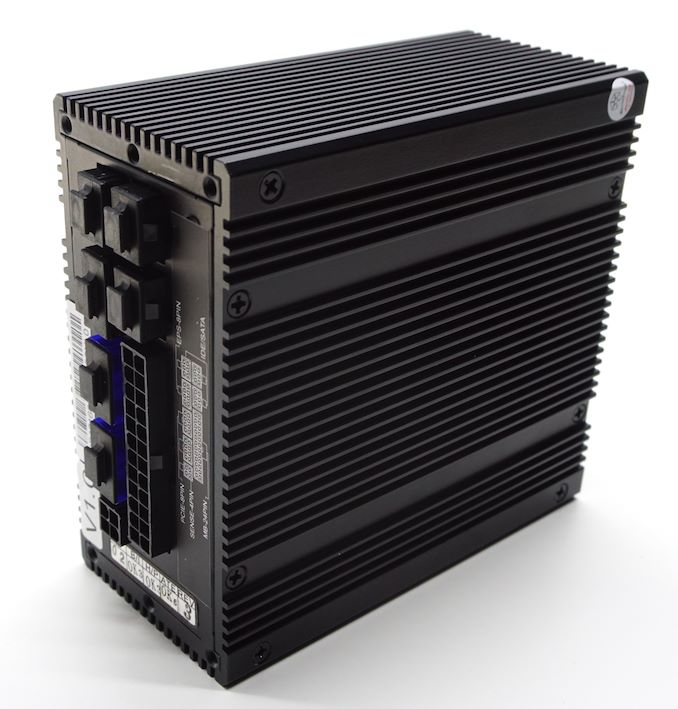 As the PSU relies on natural convection for cooling, the designer had to convert its sides, top, and bottom into aluminum heatsinks with adequate mass and surface area. Instead of using a fan to remove thermal energy from the unit’s internal heatsinks and transfer it to the outside of the case, the internal heatsinks are now attached to the comparatively massive chassis heatsink and the energy is being dissipated directly to the surrounding air - this air, however, will still be inside the system’s case. 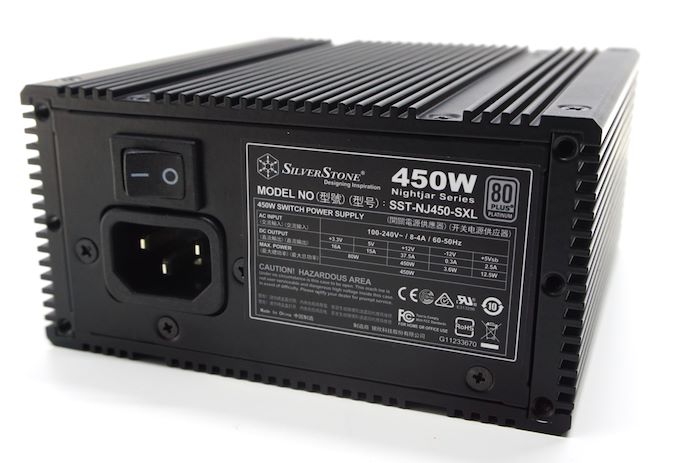 In order to leave the heatsinks unobstructed, the designer moved the sticker with the unit’s electrical specifications and certifications at the rear side of the PSU, next to the on/off switch and the AC cable receptacle, on the area that is normally used for the air exhaust vents. The front side holds the connectors for the modular cables. Most of the connectors are black, with the exception of the PCI Express device connectors, which are blue. SilverStone also placed small plastic caps on most of the connectors, excepting the 24-pin cable connector that will always be populated anyway. A small legend on a sticker below the connectors indicates where each connector goes. An interesting observation here is that the NJ450-SXL offers four PCI Express device connectors, suggesting that it can be used to power multi-GPU systems, even though it clearly is unwise to try and power two top-tier graphics chipsets with such a low power output. 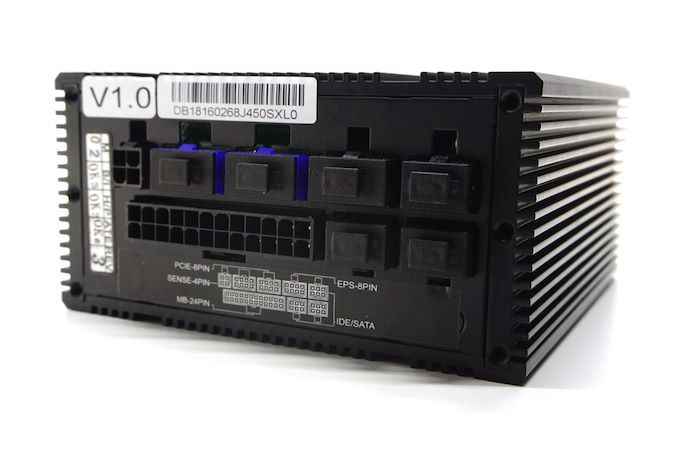 There is no fan to talk about in the NJ450-SXL, so we jump right to the OEM of the platform, which is Enhance Electronics. Enhance is not particularly popular amongst enthusiasts because their top-tier designs are frequently outperformed (or outpriced) by other OEMs but their products undeniably are of high quality and reliable. 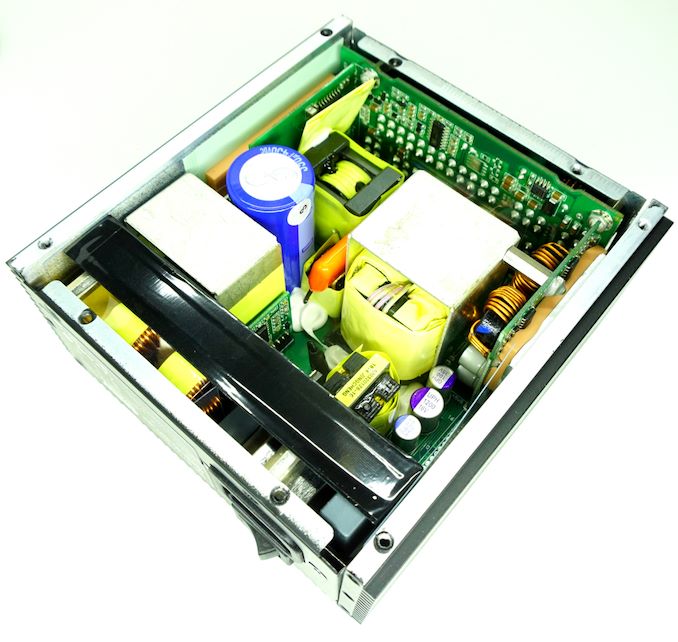 Internally, the SilverStone Nightjar NJ450-SXL is not in any way special when compared to typical PSUs, with the exception of the strange-looking heatsinks. Unlike the heatsinks we normally find in regular air-cooled PSUs, the internal heatsinks of the Nightjar NJ450-SXL are thin and designed so as to have ample contact surface with the exterior heatsinks of the power supply. As they have very little mass, the internal heatsinks store very little thermal energy and quickly transfer it to the greatly larger exterior of the PSU, acting much like solid heat pipes. 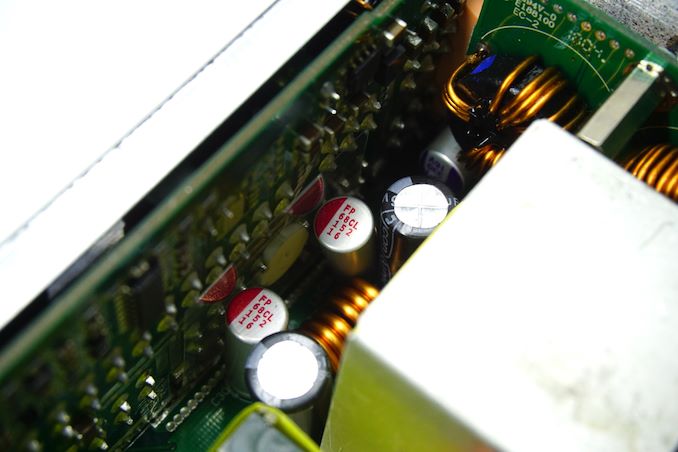 The filtering stage is found on a daughterboard that is placed against the rear wall of the unit, where the sticker with its electrical specifications is. Enhance is a bit generous when it comes to filtering, as we counted two more X capacitors than usual, i.e. four Y capacitors, four X capacitors, and two filtering inductors. There are two rectifying bridges, both attached to a small heatsink that is in contact with the chassis. The rectifying bridges are greatly oversized and can handle the load of even >1 kW PSUs, so it is highly unlikely they will be getting even lukewarm inside the Nightjar NJ450-SXL. 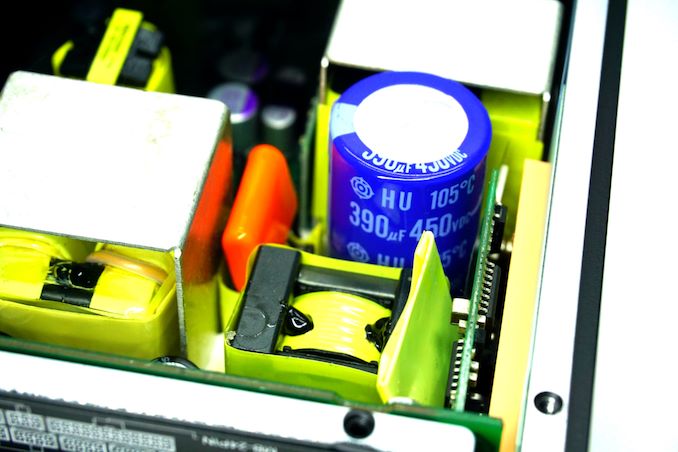 Enhance took a slightly wild approach with the positioning of the two primary inversion MOSFETs that form the unit’s half-bridge primary stage. The designer moved them on a vertical daughterboard near the edge of the unit, in direct contact with the unit’s side cover. As these are perhaps the hottest part inside modern PSUs, the designer most probably wanted to ensure the best possible heat transfer from them to the unit’s exterior. The primary APFC capacitor is rated at 450V/390μF and made by Hitachi. 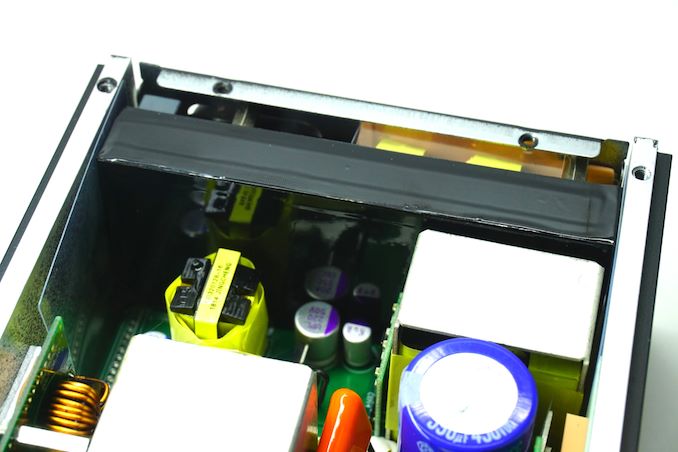 All of the secondary side MOSFETs that generate the 12V line are placed on the underside of the main PCB, in direct contact (via a thermal pad, of course) with the large heatsink cover of the PSU. A vertical PCB near the left edge of the PSU holds the DC-to-DC converters for the 5V and 3.3V voltage line. The few electrolytic capacitors on the secondary side are made by Unicon, a Japanese company that we rarely see supplying products for PC PSUs. The solid-state capacitors are supplied by Nichicon.