Launching This Week: NVIDIA’s GeForce RTX 3060 Ti, A Smaller Bite of Ampere For $400 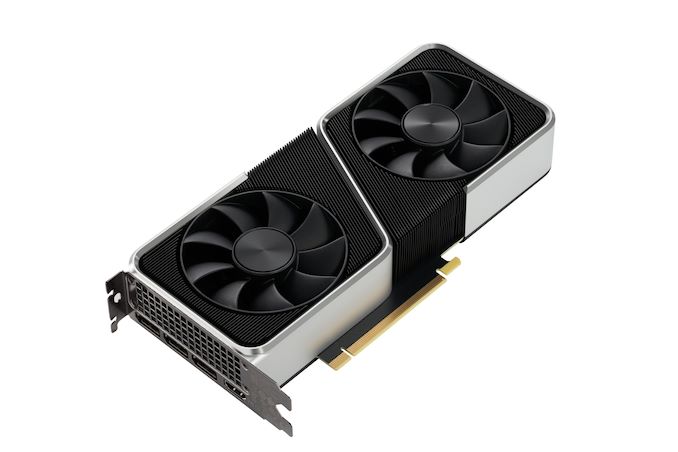 After a short holiday break, NVIDIA’s gradual rollout of their Ampere family of GeForce video cards is resuming this week with the launch of the GeForce RTX 3060 Ti. Based on a cut-down GA104 GPU – the same chip that went into October’s GeForce RTX 3070 – the new card is designed to occupy the next spot down the price/performance hierarchy, targeting something between max-quality 1080p and 1440p gaming depending on the game. With a launch price of $399, this makes it the cheapest RTX 30 series card yet – though likely one that’s going to be just as hard to get ahold of when it goes on sale tomorrow.

NVIDIA has been operating in a fairly straightforward top-down launch strategy for their Ampere video cards, and the RTX 3060 Ti will continue this trend. Whereas the RTX 3070 was distinctly aimed at 1440p gaming, RTX 3060 Ti is a bit slower, offering around 80% of the former’s performance. So NVIDIA has adjusted their product positioning accordingly, setting up RTX 3060 Ti to be something of an in-betweener card that’s not quite powerful enough for no-compromises 1440p in all cases, but should be able to blow the roof off of 1080p gaming even with every quality setting cranked up.

In this respect the RTX 3060 Ti fits snugly into NVIDIA’s typical xx60 series market segmentation, which has been the domain of 1080p-focused cards for much of the last decade. It’s slightly stranger to see NVIIDA launch a Ti card before the base version, but this is largely a consequence of NVIDIA using their top GPU (GA102) for the RTX 3080, meaning NVIDIA has somewhat backed themselves into a corner with product naming.

At any rate, although the RTX 3060 Ti is not quite “high-end” by traditional metrics, as it’s based on a cut-down version of GA104 it’s certainly nothing to sneeze at. Neither for that matter is the $399 price tag, which is $100 below the RTX 3070, but still far from the mainstream. Overall, the RTX 3060 Ti is the obligatory second-tier part for NVIDIA’s GA104 GPU and board designs: with the best GA104s going into the RTX 3070, parts that don’t make the cut there instead find a home in the RTX 3060 Ti. This means that the RTX 3060 Ti comes with all of the features and functionality of NVIDIA’s other RTX 30 series cards, from the use of second-generation ray tracing cores and significantly revised SMs out to HDMI 2.1 output support, just at a lower price and performance point.

Meanwhile, unlike October’s RTX 3070 launch, NVIDIA’s partners will be hitting the ground running on cards, with custom RTX 3060 Ti cards launching alongside NVIDIA’s reference design. So if you don’t like NVIDIA’s in-house design, then there will be options available from the usual suspects, most of which will be reusing their already-established RTX 3070 designs.

Unfortunately, even with partners launching alongside NVIDIA, retail availability is going to remain a challenge. As has been a recurring theme across the entire technology industry all fall now, good hardware is hard to come by, and the newest generation of video cards have been no exception. NVIDIA and company have been selling Ampere cards as fast as they can ship them out, and a $400 card with no competition isn’t likely to fare any better when it comes to availability. So I’m expecting the RTX 3060 Ti to be a fleeting commodity when it launches tomorrow.

Moving on, let’s dive into the specifications for NVIDIA’s latest Ampere card. As previously mentioned, this is a (further) cut-down GA104 GPU, with NVIDIA disabling 8 SMs versus the GA104 used in the RTX 3070. Combined with a roughly 4% reduction in the rated boost clock, and the net impact is that, on paper, the RTX 3060 Ti offers about 80% of the performance of the RTX 3070. And that goes for everything from shader and compute throughput to texture and pixel throughput, thanks to the fact that the ROPs on Ampere are tied to the SMs. So outside of the memory subsystem, NVIDIA has essentially scaled back on all of the functional blocks to the same degree, and the balance between various functional blocks remains as it was on the RTX 3070. 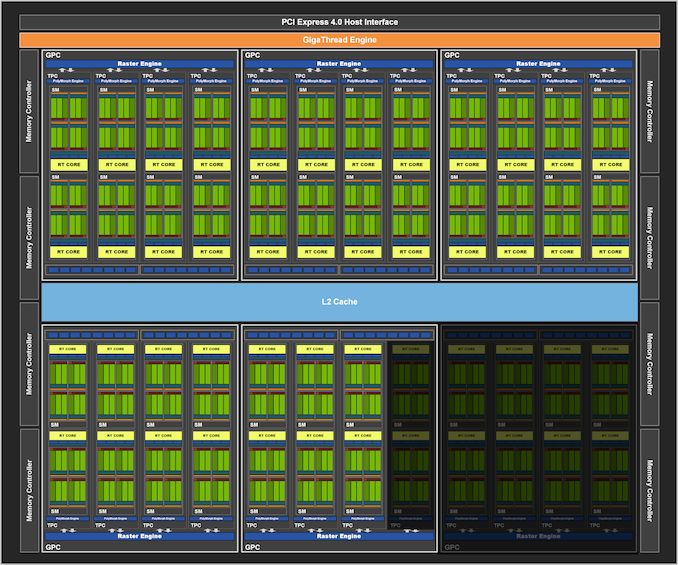 The use of a cut-down GPU also means that power consumption has come down as well, though not by a huge amount. The RTX 3060 Ti carries an overall TDP rating of 200 Watts, 20W lower than what the RTX 3070 was rated for. Keeping in mind that these are peak ratings, it’ll be interesting to see what the real-world difference is in power consumption; but NVIDIA’s numbers tend to be pretty accurate. In which case the RTX 3060 Ti is not going to be meaningfully more energy efficient than the RTX 3070 – and may in fact be slightly less efficient overall. Overall, the entire Ampere family has run a bit heavy in terms of power consumption compared to past generations, and the RTX 3060 Ti is no exception. 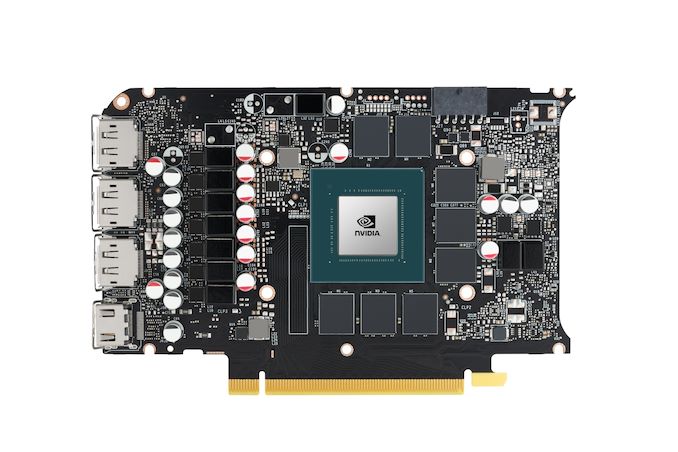 Meanwhile on the cooling front, given the identical GPU and similar TDP as the RTX 3070, NVIDIA has opted to stick with the RTX 3070’s board design and cooler. Since this is a repeat of the RTX 3070, there’s nothing really new to say on the subject; the unconventional cooler leaves a distinct impression, both visually and with regards to how airflow moves through a system, with one of the fans specifically designed to push air through the full-body heatsink and into the upper chamber of a PC. This flow-through design also means that the PCB itself remains very short, and would be right at home in a Mini-ITX card. The resulting card measures 9.5-inches long, which is smaller than NVIDIA’s largest cards, but still making for a decently-sized dual-slot card. 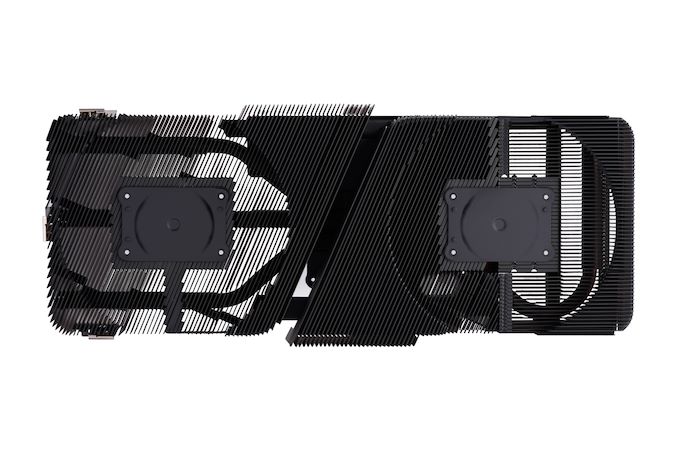 It should also be noted that, like the rest of the RTX 30 series cards, you’ll need a 12-pin power connector to feed the card. NVIDIA includes a 1x8-pin to 12-pin adapter to handle backwards compatibility with existing PSUs, while some PSU manufacturers are offering modular cables with the new plug type.

Power connectors aside, the rest of the I/O and ports remain unchanged from the RTX 3070. This means 3x DisplayPort 1.4 outputs, and 1x HDMI 2.1 port. Similarly, this means that the card can drive 4 displays overall.

As mentioned previously, NVIDIA is aiming the RTX 3060 Ti at a mix of 1080p and 1440p gaming. Since it’s not as powerful as the RTX 3070, it’s not quite up to the task of running 1440p with everything turned up in every last game. But in lieu of that, it’s almost overpowered for 1080p, making it a solid choice for 1080p gaming without compromises.

Meanwhile, NVIDIA will once again be leveraging Best Buy and Microcenter (in the US) to sell their Founders Edition cards. The two retailers will be the only stores to carry the FE card, and judging from how their first attempt went with the RTX 3070 launch, this should again be at least a slightly smoother way to go than the chaos that came from NVIDIA selling hard-to-get Ampere cards through their own webstore.

On the other hand, if you’re after a customized AIB card, those are also launching alongside NVIDIA’s reference design. ASUS, MSI, EVGA, Gigabyte, and the rest of the crew will be releasing their own card designs through Newegg and the other major etailers. We don’t have a comprehensive list of card models at this time, but judging from their RTX 3070 offerings, expect a lot of these to be factory overclocked, and carrying a higher MSRP to match. 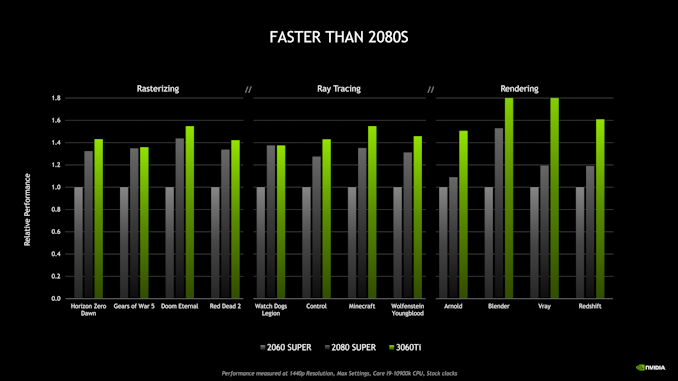 Overall, the RTX 3060 Ti is being pitched as roughly performance equivalent to the last-generation RTX 2080 Super, similar to how the RTX 3070 was pitched as a cheaper RTX 2080 Ti. Otherwise, on a dollar basis, it occupies the slot previously held by the RTX 2060 Super. The RTX 3060 Ti isn’t going to be fast enough to justify upgrading from that 20 series card – coming out around 40% faster – so like the rest of the Ampere stack, NVIDIA is mostly going to be focused on selling it to customers still sitting on Pascal and Maxwell cards. Those families didn’t have an equivalent to the RTX 3060 Ti, so there isn’t an ideal comparison to make, but it’s safe to say that the RTX 3060 Ti is going to be something GTX 1070 (and below) owners will want to take a closer look at.

Finally, taking a look at the competitive landscape, there isn’t much to speak of. With AMD’s cheapest Radeon RX 6000 series card, the RX 6800, priced at $579, the RTX 3060 Ti is being aimed well below any of AMD’s new RDNA2 cards. That means the closest competitor to the new card in AMD’s stack is the year and a half old Radeon RX 5700 XT, which it looks like AMD is scaling down the production of anyhow. So in theory, if you can actually get a video card tomorrow, at $400 the RTX 3060 Ti is the only game in town.

That said, in practice expect the RTX 3060 Ti launch to be a stock-limited launch, just like the other RTX 30 series cards. Even with another month over the RTX 3070 to build up a card supply for this launch, the $400 price tag on the RTX 3060 Ti will push it up the price/volume curve. Which is to say that demand is likely to be even higher than the earlier, more expensive Ampere cards. So anyone who is looking to buy an RTX 3060 Ti on Wednesday will want to move quickly.