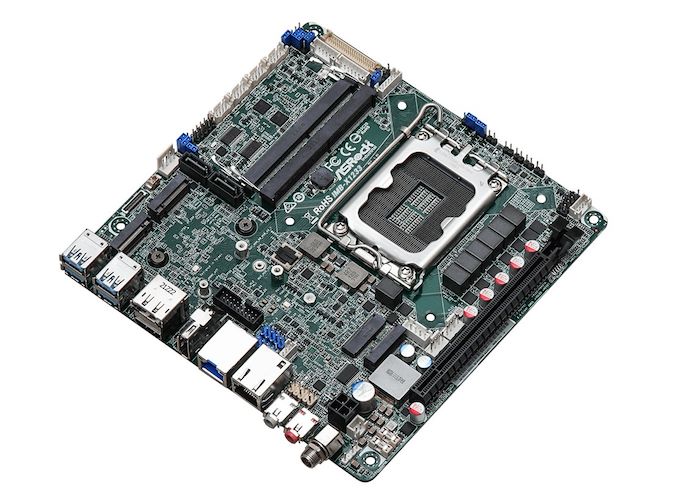 Earlier this month Intel quietly launched its W680 chipset, the company's workstation-focused chipset for its 12th Gen Core (Alder Lake) processors. Unlike the current generation of consumer desktop chipsets such as Z690, H670, B660, and H610, the W680 adds the capability to use ECC DRAM, including both DDR5 and DDR4 variants. At present, there haven't been many W680 motherboard announcements, although a couple of vendors, including ASRock Industrial and Supermicro have a few options listed. So we're giving you the lowdown on W680, what it has to offer, and what technologies it brings for users looking to build a workstation-class desktop with Intel's latest Alder Lake architecture.

Typically when Intel launches a new series of processors for the desktop market, it releases multiple chipsets with varying levels of features. For its 12th Gen Core family, Intel initially launched its CPUs and premium Z690 chipset, and followed that up with its more affordable H660, B660, and H610 chipsets. In most generations the product stack is rounded out a bit later with a W-series workstation-focused chipset, and finally a variety of Xeon-E series.

Enter the Intel W680 chipset, which is Intel's designated workstation chipset for its 12th Gen Core platform. The Intel W680 chipset is interesting for a variety of reasons, not the least of which is that that it formally opens up ECC memory support for Intel's Alder Lake-S desktop processors. 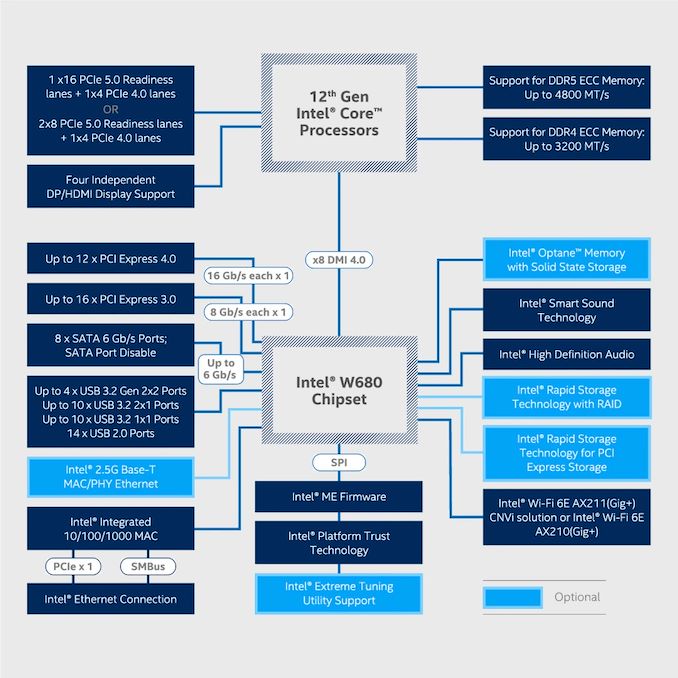 Some of the main features of the W680 chipset include a PCIe 4.0 x8 DMI link, which connects the processor to the chipset for improved bandwidth over Intel's previous W-series chipsets. Other features include support for up to eight SATA ports and integrated Wi-Fi 6E PHY/2.5 GbE MACs for vendors to hook in the latest networking controllers. Intel includes support for 16x PCIe 5.0 lanes from the CPU, with the usual 16/0 or 8/8 bifurcation options.

Other features with W680 include native support for USB 3.2 Gen2x2 (20 Gbps) Type-C connectivity. However, most of the cost and implementation of networking and connectivity still rely on vendors using solutions through proprietary CNVi connections. This is much the same story on regular Z690, H670, B660, and H610 options, the cost for the target market is a massive factor here on what vendors decide to include or omit. The point is the capability is there should a vendor wish to utilize it.

On the whole, there isn't much difference between the W680 and Z690 chipsets when comparing technical specifications. This includes package size (both are 28 x 25 mm), USB, PCIe, and storage support, but interestingly there's a new addition to Intel's latest desktop workstation chipset. This 'new' inclusion is official support for overclocking, which is something both of the previous W-series chipsets – W580 and W480 – omitted.

While the last couple of W-series chipsets allowed users to overclock the memory on supported processors, Intel has opened this up to unlocking the core frequency when combined with its K-series processors on W680. And while this functionality is appreciated, it's admittedly unlikely users will want to significantly overclock an already hot running and high-powered Alder Lake processor, especially on a motherboard that doesn't have a robust power delivery system like Z690 motherboards do.

The point to this is Intel is giving users a choice, and while it sounds nonsensical in practice, it's a pretty big move for conservative Intel. It should be noted that its H610 chipset doesn't support CPU overclocking; it's an interesting shift from Intel's previous standpoint when it comes to overclocking.

Despite Intel opting for a slow ramp up for its W680 chipset, a few motherboard options are officially listed, including from ASRock Industrial and Supermicro. As time goes by, and perhaps when Intel pulls the trigger on its obligatory Xeon E-3300 family of processors, motherboard vendors might opt to officially announce more models.

The key element with W680 is that while they offer support for existing Alder Lake-S processors, they are designed around its Xeon series, which aren't usually overclockable. These models generally feature lower core frequencies and TDPs, given their greater focus on reliability versus performance. 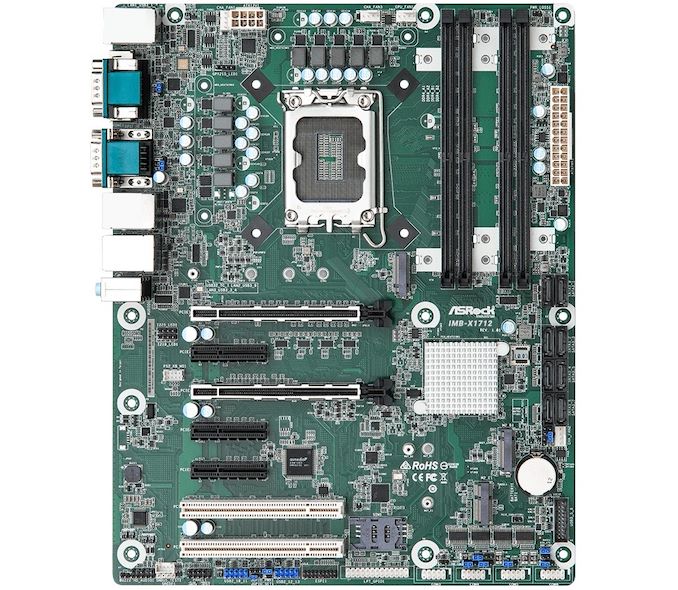 All of ASRock Industrial's W680 options include support for ECC DDR4-3200 memory and offer varying levels of PCIe 4.0 and storage support. The PCIe 4.0 support depends on the form factor as the ITX sized offerings are limited to just one full-length PCIe 4.0 slot, while the IMB-X1314 and IMB-X1712 have two full-length PCIe 4.0 slots available. For the ITX sized models, both benefit from dual 2.5 GbE, while the larger models have three 2.5 GbE controllers, all of which use Intel I225-LM controllers to power each Ethernet port across all models. It's worth noting that the IMB-X1712 includes two PCI slots for legacy devices. 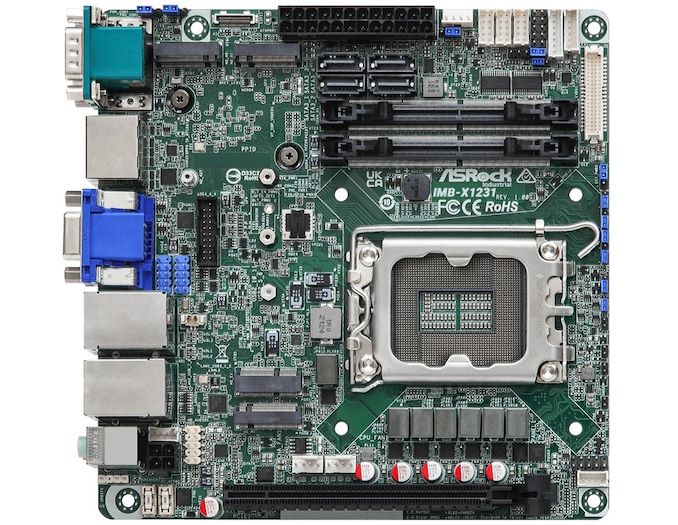 Both the IMB-X1233-WV and IMB-X1231 ITX sized offerings allow support for Alder Lake-S processors with a maximum TDP of 65 W, while the micro-ATX IMB-X1314 and ATX IMB-X1712 enable users to use processors with a base TDP of up to 125 W. Support and compatibility here are aligned and determined by the base frequency TDP rating on these models.

At the time of writing, ASRock Industrial hasn't announced any availability or pricing for any of its W680 models.

For Intel's W680 chipset launch, Supermicro has listed two motherboards designed around the new chipset. This includes the X13SAE and the X13SAE-F motherboards. These models are ATX in size and include support for DDR5-4400 memory, both ECC and non-ECC DRAM types. 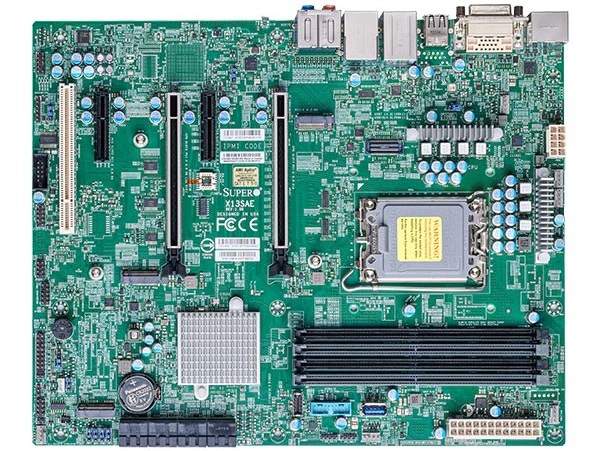 Despite both the Supermicro X13SAE and X13SAE-F featuring the same base specifications, including dual Ethernet, one powered by an Intel I225-V 2.5 GbE and the other by an Intel I1219-LM Gigabit controller pairing, there is one key difference. The Supermicro X13SAE-F includes IPMI functionality which is powered by an ASPeed AST2600 BMC controller and includes a supplementary Realtek RTL8211F management LAN port.

Both of the Supermicro X13 (W680) allow users to use Alder Lake-S processors with a base TDP of 125 W, and both are using a Realtek ALC888S HD audio codec. They share the same connectivity options, including HDMI 2.1, DisplayPort 1.4, and DVI video outputs, as well as three USB 3.2 G2 Type-A and one USB 3.2 G1 Type-A port on the rear panel.

At the time of writing, Supermicro hasn't shared any information regarding the availability or pricing on its X13 (W680) motherboards.

For other LGA1700 options such as Z690 motherboards, below we have a list of our detailed Intel Alder Lake coverage: