The Bulldozer Aftermath: Delving Even Deeper

Quite a few people have commented that Bulldozer is AMD's version of Intel's Pentium 4: it has a long pipeline, with high branch misprediction penalties, and it's built for high clock speeds that it cannot achieve. The table above seems to reinforce that impression, but the resemblance between Bulldozer and NetBurst is very superficial.

Secondly, the Pentium 4's pipeline was 28 ("Willamette") to 39 ("Prescott") cycles. Bulldozer's pipeline is deep, but it's not that deep. The exact number is not known, but it's in the lower twenties. Really, Bulldozer's pipeline length is not that much higher than Intel's Nehalem or Sandy Bridge architectures (around 16 to 19 stages). The big difference is that the introduction of the µop cache (about 6KB) in Sandy Bridge can reduce the typical branch misprediction to 14 cycles. Only when the instruction is not found in the µop cache and must be fetched from the L1 data cache will the branch misprediction penalty increase to about 17 cycles. So on average, even if the efficiency of Bulldozer's and Sandy Bridge's branch predictors is more or less the same, Sandy Bridge will suffer a lot less from mispredictions.

Quite a few reviewers, including our own Anand, have pointed out that two integer cores in Bulldozer share four decoders, while two integer cores in the older “K10” architecture each get three decoders. Two K10 cores thus have six decoders, while two Bulldozer cores only have four. Considering that the complexity of the x86 ISA leads to power hungry decoders, reducing the power by roughly 1/3 (e.g. four decoders instead of six for dual-core) with a small single-threaded performance hit is a good trade off if you want to fit 16 of these integer cores in a power envelope of 115W. Instead of 48 decoders, Bulldozer tries to get by with just 32.

The single-threaded performance disadvantage of sharing four decoders between two integer cores could have been lessened somewhat by x86 fusion (test + jump and CMP + jump; Intel calls this macro-op fusion) in the pre-decoding stages. Intel first introduced this with their “Core” architecture back in 2006. If you are confused by macro-ops and micro-ops fusion, take a look here.

However AMD decided to introduce this kind of fusion in Bulldozer later in the decoding pipeline than Intel, where x86 branch fusion is already present in the predecoding phases. The result is that the decoding bandwidth of all Intel CPUs since Nehalem has been up to five (!) x86-64 instructions, while x86 branch fusion does not increase the maximum decode rate of a Bulldozer module.

This is no trifle, as on average this kind of x86 fusion can happen once every ten x86 instructions. So why did AMD let this chance to improve the effective decoding rate pass even if that meant creating a bottleneck in some applications? The most likely reason is that doing this prior to decoding increases the complexity of the chip, and thus the power consumption. Even if AMD's version of x86 branch fusion does not increase the decoding bandwidth, it still offers advantages:

Mark of Hardware.fr compared the performance of a four module CPU with only one core per module enabled with the standard configuration (two integer cores per module). Lightly threaded games were 3-5% faster, which is the first indication that the front end might be something of a bottleneck for some high IPC workloads, but not a big one.

One of the most important features of Intel's Core architecture was its speculative out-of-order memory pipeline. It gave the Core architecture a massive improvement in many integer benchmarks over the K8, which had a strictly in order pipeline. Barcelona improved this a bit by bringing the K10 to the level of the much older PIII architecture: out of order, but not speculative. Bulldozer now finally has memory disambiguation, a feature which Intel introduced in 2006 in their Core architecture, but there's more to the story.

Bulldozer can have up to 33% more memory instructions in flight, and each module (two integer stores) can do four load/stores per cycle. It's clear that AMD’s engineers have invested heavily in Memory Level Parallelism (MLP). Considering that MLP is often the most important bottleneck in server workloads, this is yet another sign that Bulldozer is targeted at the server world. In this particular area of its architecture, Bulldozer can even beat the Westmere Intel CPUs: two threads on top of the current Intel architecture have only 2 load/stores available and have to share the L1 data cache bandwidth.

The memory controller is improved too, as you can see in the stream benchmark results below. For details about our Stream binary, check here. 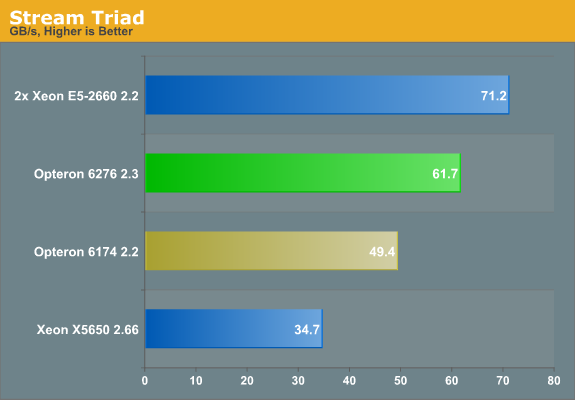 Bandwidth is 25% higher than Barcelona, while the clock speed of the RAM modules has only increased by 20%. Clearly, the Orochi die of the Opteron 6200 has a better memory controller than the Opteron 6100. The memory controller and load/store units are among the strongest parts of the Bulldozer architecture.