When testing the Dell U2713HM my standard way, using a 2010 Macbook Air, my initial performance numbers were not very good at all. Some investigation found that on the MacBook Air when using DisplayPort sends YCbCr color information instead of RGB color information, and so I was getting worse results. Using a StarTech MiniDP to DVI adapter let me drive the Dell at full resolution but in the RGB colorspace. This issue didn’t happen with an ATI or NVIDIA card, so I have to think it was something specific to the MacBook. When using this display, make sure to check the video signal format, as it handles RGB much better.

Dell includes a report for how the monitor should perform, and unlike other vendors that promise a certain dE, Dell shows what they tested and what the results are. These only apply to the included sRGB mode in the display, so you should make sure to use that, and reset your video card LUT, to achieve these results. 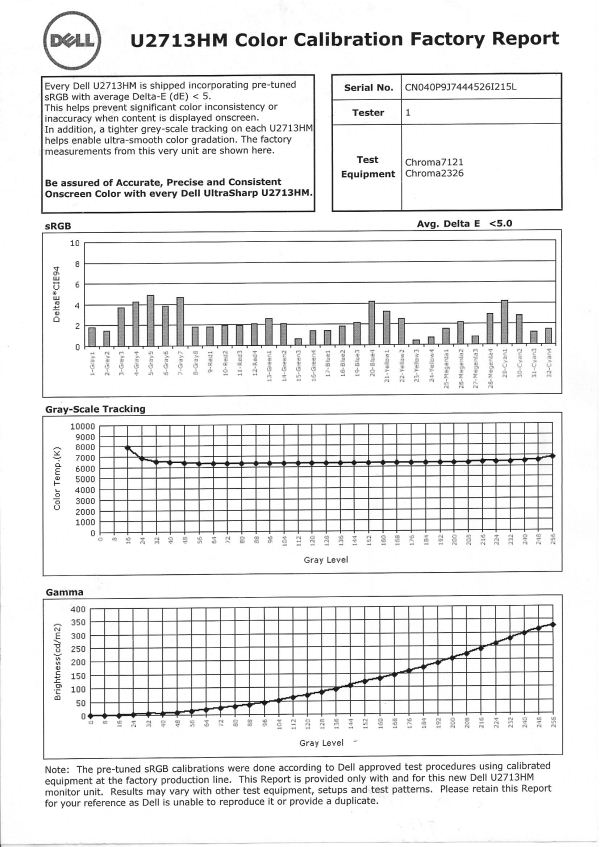 Our targets for calibration are D65 for the white point, 200 nits of light output, a gamma of 2.2, and a minimum black level. Once set up correctly, using the included profile and sRGB mode, the Dell provides the best out-of-box performance that I’ve measured so far. The average dE is only 3.15 and the maximum value is only 5.75, which is lower than the average of most displays. Dell includes a calibration report in the box and in this case it really seems to have paid off. For most people, this will likely be good enough performance as it is quite accurate and the errors should be mostly invisible to the naked eye. 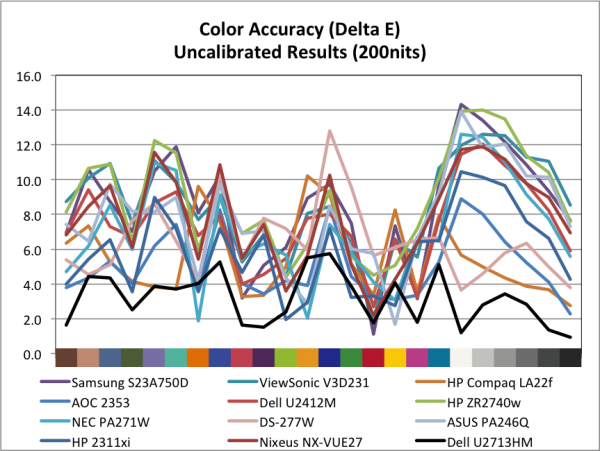 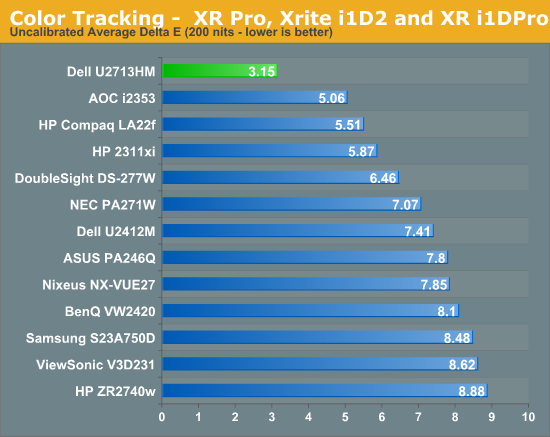 With such stellar out-of-the-box numbers I had really high hopes for how the Dell would perform after a calibration. For reference, in YCbCr mode I only managed to calibrate to a dE of around 3, which is far worse than the 1.62 from RGB mode. This outperforms almost all of the 27” displays seen to this point, and those that do out-perform it cost significantly more. There are no issues with the grayscale or anything else after calibration, and you wind up with a very nice, accurate image. It is significantly better than the pre-calibration one, but many users will be fine without the extra step. 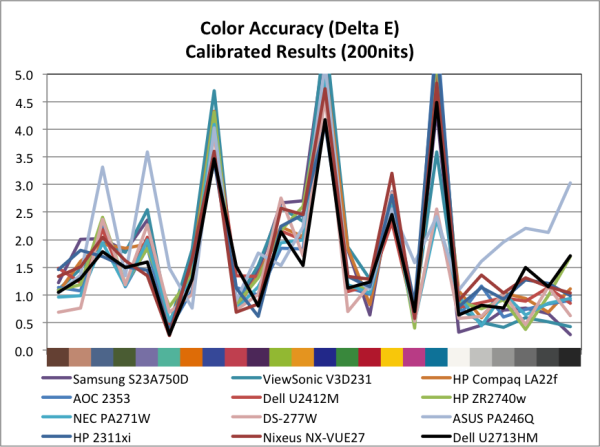 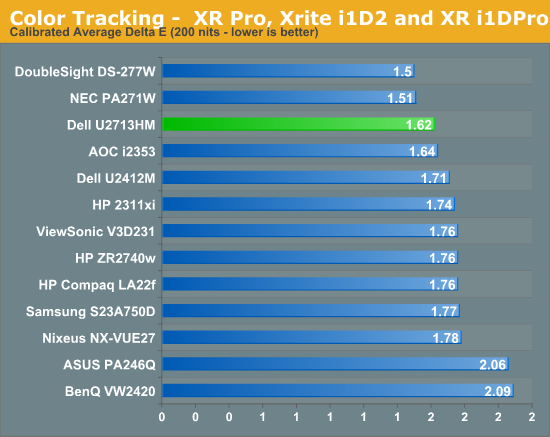 When targeting 100 nits of light output for print work, we see a dE of 1.85, which is good but not as excellent as the 200 nits numbers are. On this test the best monitors manage to do much better with those tricky shades of blue than the Dell does, but this doesn’t really worry me that much. Blue is the color we are least sensitive to, so errors in blue are more acceptable than errors in greens or reds. The Dell produces very accurate shades of green and well-rendered skin tones, making it a good choice for more color sensitive work. It isn’t as excellent as the NEC is, but it is around half the price. 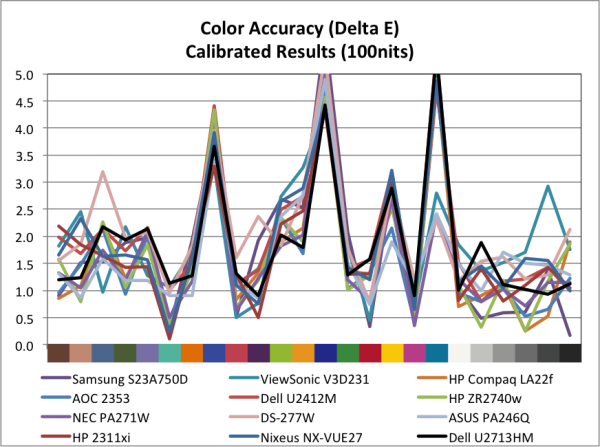 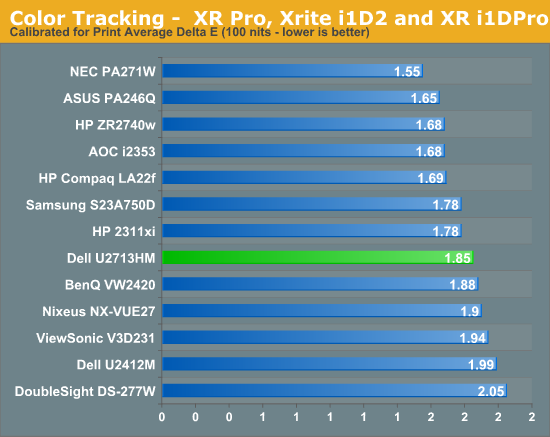 Overall the Dell has very good results on the calibrated results, and the best results that I have seen by far on the pre-calibration numbers. If you want accurate color but don’t own equipment to do the calibration yourself, Dell provides results better than anything else I have seen and the included calibration report and testing hopefully means this isn’t just a random sample that happens to be excellent.

As with all the LED backlit 27” IPS displays, we see the sRGB gamut being covered but not AdobeRGB gamut coverage. The Dell manages to cover over 79% of the AdobeRGB gamut, which is pretty good for a panel without special backlighting, so for normal sRGB work it should do a very good job. 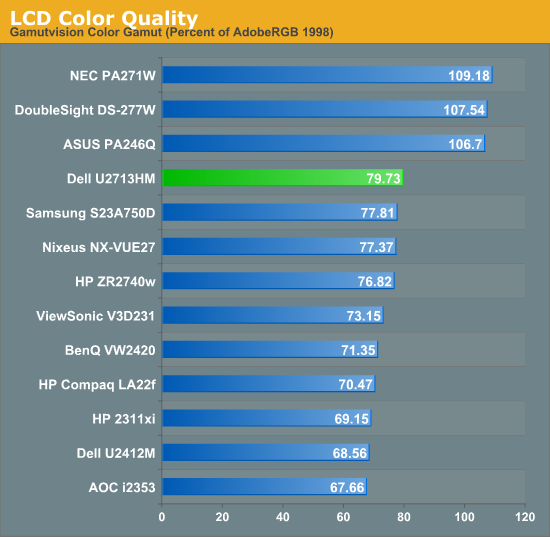 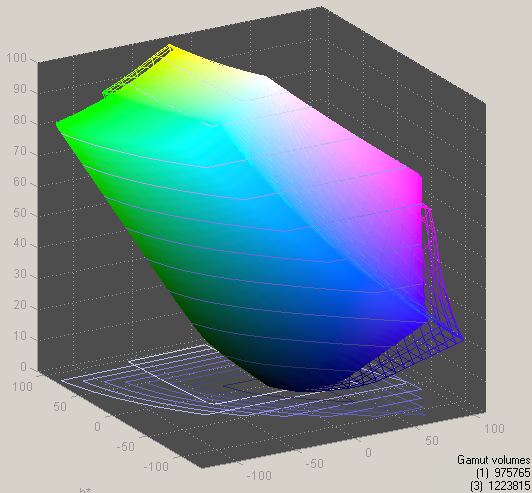