The last time we checked out a fanless desktop system, it was Logic Supply's LGX AG150. While affordable, that system was powered by Intel's Cedar Trail Atom processor, a chip with serious teething issues under Windows. Today, though, we have a beefier beast: can CompuLab's Intense PC with an entirely fanless enclosure handle the heat from a 17W Ivy Bridge CPU? 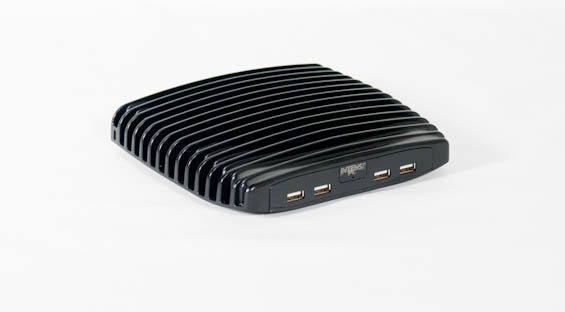 While performance isn't exactly liable to be intense, what's certainly intense about the Intense PC is its weight. What you're looking at, essentially, is one massive heatsink with a computer at its center. The Intense PC is almost three pounds, so it's roughly as heavy as an ultrabook, but it's a lot smaller and denser. CompuLab's site says the Intense PC is ruggedized to take a beating and handle industrial situations, and I believe it.

The base $399 model is CompuLab's barebones: it comes with an Intel Celeron 847E, which offers just 1.1GHz dual core operation and ditches the RAM, HDD, and OS. What's important to keep in mind is that while none of the specs are particularly fancy, the enclosure is. I can't stress this enough: this is a giant block of metal with ports and a computer hiding inside it. It's also intended for predominately industrial applications, and comes with a 24-month warranty standard. This is effectively enterprise-class.

CompuLab sent us their top of the line model for review, so this is as good as the Intense PC gets before you start upgrading it manually. The Intel Core i7-3517UE is a dual core processor that runs at 1.7GHz nominally, up to 2.6GHz on both cores, and up to 2.8GHz on a single core. The HD 4000 does take a slight hit compared to the conventional i7-3517U, though, sporting a top speed of 1GHz instead of 1.15GHz.

Backing up that processor is 8GB of DDR3-1600 courtesy of Hynix, and the memory is user expandable to 16GB. The Realtek wireless is serviceable but not outstanding; as even smartphones are starting to graduate to 5GHz wireless, settling for the 2.4GHz band only is kind of a drag. Thankfully that's also user replaceable. Finally, the biggest drag may just be the storage subsystem. There's a full-size mini-PCIe slot inside the chassis, but that slot does not support mSATA, which in my opinion is a pretty big omission at this point in the game. and it does support mSATA.

The chassis also supports a single 2.5" drive, but the 500GB, 5400-RPM Hitachi drive included lowballing it. I see why they chose this model specifically; heat tolerances are actually very high, with a maximum operating temperature of 70C, and the drive is designed for 24/7 operation. Still, in this day and age, a $1,149 computer shipping without an SSD is a bitter pill to swallow; if reliability is an issue, shipping an Intel SSD would've been appreciated.