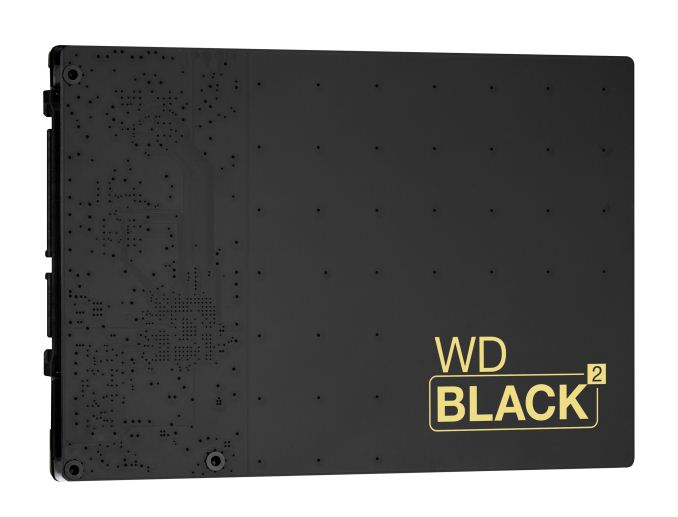 If you had asked me a few years ago, I would've said that hybrid drives will be the next big thing in the storage industry. Seagate's Momentus XT got my hopes up that there is manufacturer interest in the concept of hybrid drives and I was expecting the Momentus XT to be just the beginning with more announcements following shortly after. A hybrid drive made so much sense -- it combined the performance of an SSD with the capacity of a hard drive in an affordable and easy to use package.

Seagate's Momentus XT showed that even 4GB/8GB of NAND can make a tremendous impact on the user experience, although it couldn't compete with a standalone SSD. The reason for that was the very limited amount of NAND since the speed of an SSD relies on parallelism: a single NAND die isn't fast (though for random IO even it's still far better than a hard drive), but when you combine a dozen or more dies and read/write to them simultaneously, the performance adds up. I knew the Momentus XT was a first generation product and I accepted its limitations, but I truly expected that there would be a high-end drive with enough NAND to substitute for an SSD.

It turns out I was wrong... dead wrong. Sure Seagate doubled the NAND capacity to 8GB in the second generation Momentus XT, but other than that the hybrid drive market was pretty much non-existent. Western Digital showed their hybrid drives over a year ago but limited them to OEMs due to a unique connector. To be honest, I've not seen WD's hybrid drives used in any systems, so I'm guessing OEMs weren't the biggest fans of the connector either.

As the hard drive companies weren't able to come up with decent hybrid offerings, the PC OEMs had to look elsewhere. Intel's Ultrabook concept was a big push for SSDs because Intel required at least 20GB of flash storage or the OEM wouldn't be able to use Intel's Ultrabook branding. Of course Intel had no weapons to stop OEMs from making ultraportables without flash but given the millions Intel has spent on Ultrabook marketing, it was worthwhile for OEM's to follow Intel's guidelines. Since the PC market kind of pushed itself into a corner with the price war, it wasn't possible for PC OEMs to do what Apple did and go SSD only due to prices, but on the other hand Ultrabooks had no space for two 2.5" drives. The solution? mSATA. 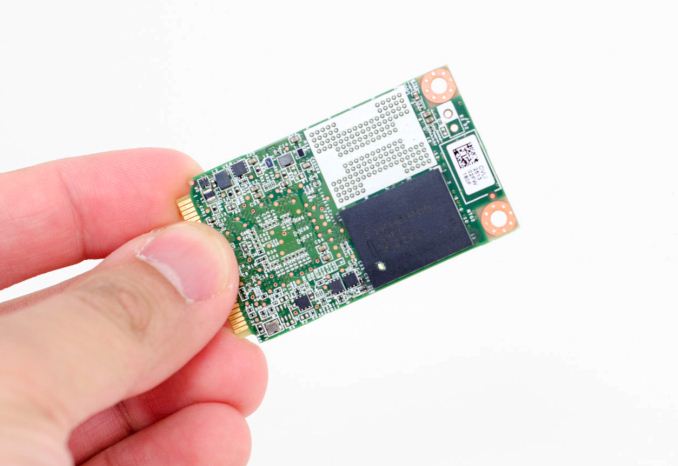 mSATA is barely the size of a credit card

Unlike hard drives, SSDs didn't have to be 2.5", it was simply a matter of compatibility with existing systems. What mSATA did was allow PC OEMs to build hybrid storage systems while keeping the Ultrabook spec and form factor. In my opinion this was a huge yet missed opportunity for hard drive OEMs. All they would have needed to do was build a hybrid drive with at least 20GB of NAND in order to meet the Ultrabook spec. I bet many PC OEMs would have chosen an all-in-one hybrid drive instead of two separate drives because managing a single supplier is easier and assuming sufficient volume the pricing should have been competitive as well.

When SSDs first appeared in the consumer space, the hard drive companies didn't feel threatened. The pricing was absurd (the first generation 80GB Intel X-25M cost $595) and performance wasn't much better than what hard drives offered. Back then SSDs were only interesting to some enthusiasts and enterprises, although many were unconvinced about the long-term benefits since the technology was very new. The hard drive companies had no reason to even think about hybrid drives as traditional hard drives were selling like hot cakes.

Today the situation is very different. Let's take the 80GB Intel X-25M G1 and 240GB Intel SSD 530 as examples: the price per gigabyte has dropped from around $7.50 to $0.83. In percentage points, that's a massive 89% decrease. Drops this big are impossible to predict as they usually aren't intentional and neither was this one. The reason why NAND prices dropped so rapidly was the oversupply caused by large investments made around 2010. The sudden increase in NAND demand due to the popularity of smartphones and tablets made the NAND business look like a good investment, which is why many companies invested heavily on it. While smartphone and tablet shipments continued to increase, the thing NAND fabricators didn't take into account was that their capacities didn't (at least not very quickly). In other words, the NAND fabricators expected that the demand for NAND would continue to grow rapidly and increased their production capacities based on that but in reality the demand growth was much smaller, which lead to oversupply. Just like other goods, NAND prices are controlled by demand and supply: when there's more supply than demand, the prices have to come down for supply and demand to meet.

SSDs are no longer luxury items. Plenty of systems are already shipping with some sort of SSD storage and the number will continue to grow. The hard drive companies can no longer neglect SSDs and in fact WD, Seagate, and Toshiba have all made substantial investments regarding SSDs. Last year WD acquired STEC, Virident, and Velobit; Seagate introduced their first consumer SSD lineup, and Toshiba has been in the SSD game for years. However, there still hasn't been a product that would combine an SSD and hard drive into one compact package. The WD Black2, the world's first SSD+HD dual-drive, changes that.

The Drive & The Test
Tweet
PRINT THIS ARTICLE
Comments Locked