The LG V60 and VELVET Review: A Classic & A Design Restart

System performance of the two LG devices are interesting as they’re one of the first times we’re able to contrast Qualcomm’s Snapdragon 765 versus the Snapdragon 865 from the same vendor, using the same software optimisations and design. We’re expecting the S765 to naturally fare worse, but the question is, how much worse is it? 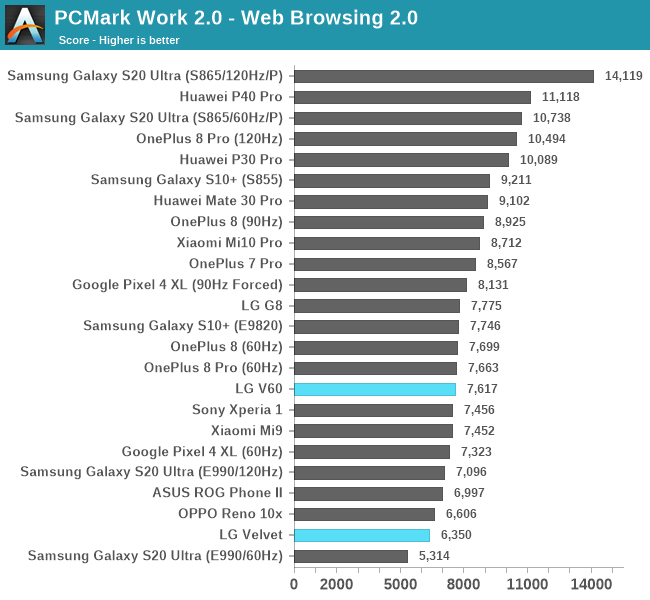 Starting off with the web browsing test in PCMark which is very sensible to performance responsiveness of the DVFS system, we see that the V60 and Velvet both fare quite averagely. The V60 is in line with the OnePlus 8 devices at 60Hz in this test which is pretty much what we’d expect, but that also means it’s also slower than last year’s G8, which seemingly didn’t have an as quite conservative software configuration.

The Velvet isn’t doing well at all and besides of the weirdly behaving S20 Ultra with the Exynos 990 at 60Hz, is the worst performing devices here. 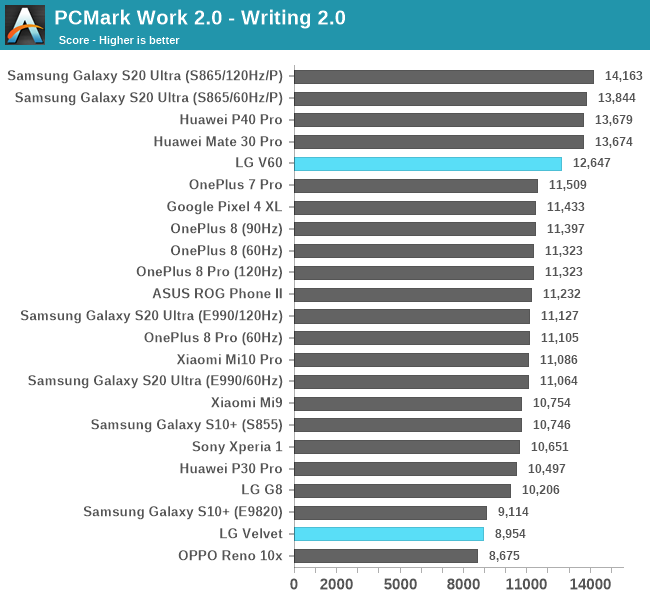 The writing sub-test which is generally more indicative of every-day performance of a device is again also quite contrasting between the two phones. The V60 fares well as is amongst the better performing Snapdragon 865 devices. The Velvet, which certainly not a slouch, compares more alike a 2018 flagship device in the scores. 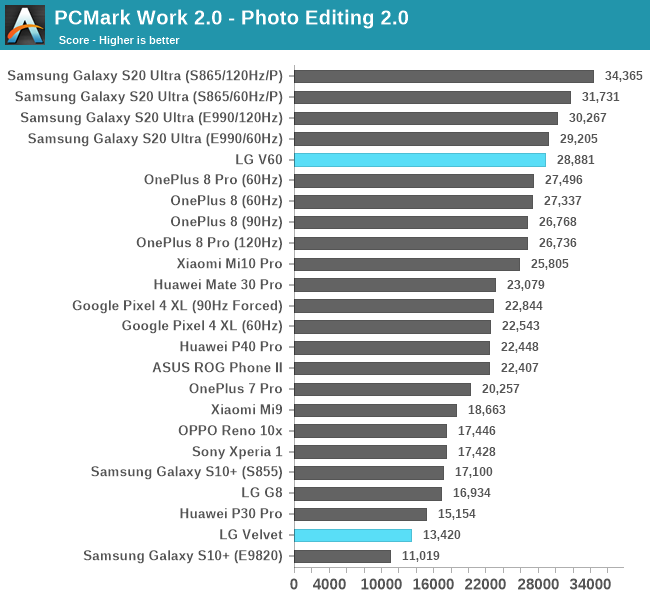 In the Photo Editing test which makes use of the GPU power, there’s a huge difference in performance between the two phones. Again the V60 is in line with other S865 devices, whilst the Velvet tends to really lag behind the pack with its weaker GPU. 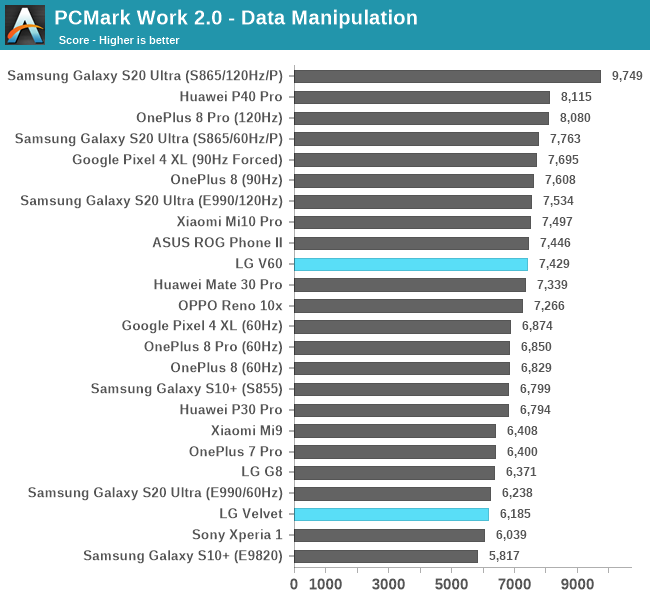 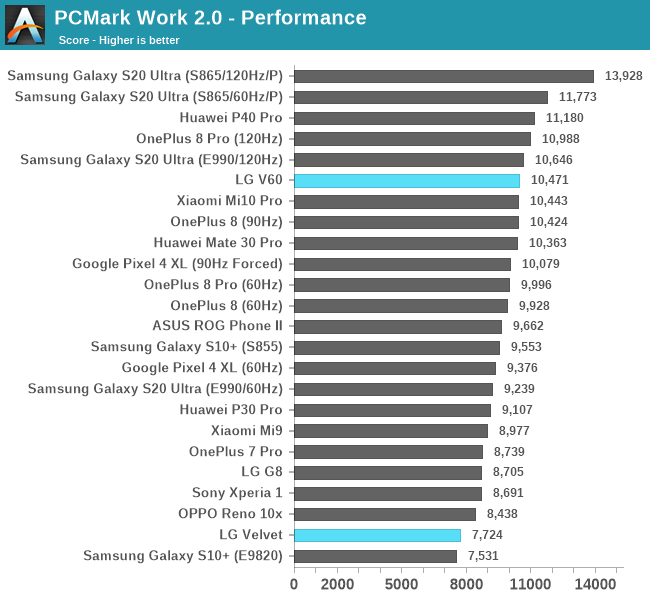 Overall, in PCMark, we see the V60 ending up on par with other 2020 flagship devices, although not quite able to best Samsung’s software optimisations. The Velvet is as expected a lower performing device, but it’s still quite a notable difference in the scores. 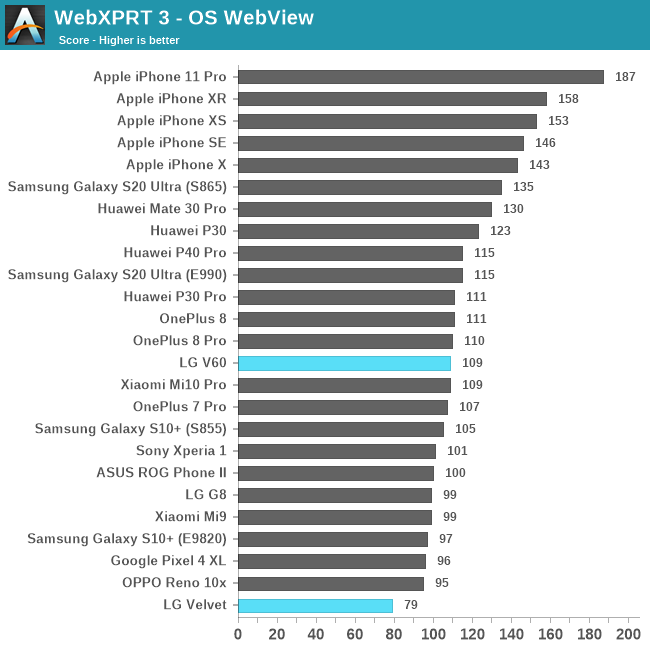 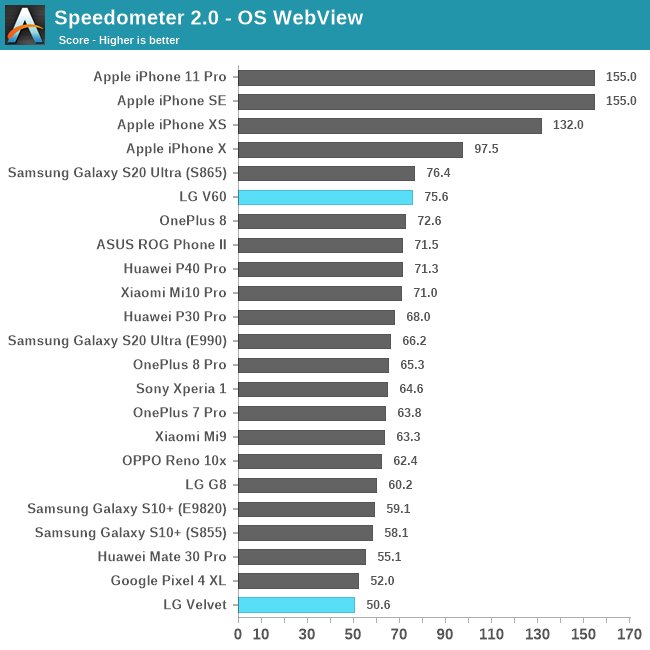 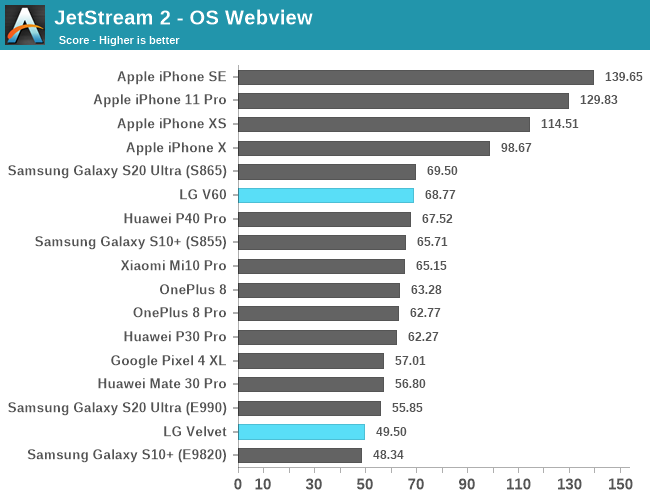 In the web-browsing and Javascipt browser tests, things are largely bottlenecked by the single-threaded performance of the CPUs of the SoC. With the Snapdragon 765 using a Cortex-A76 at 2.3GHz peak, the end performance is naturally quite a bit less than the more expensive flagship silicon. Generally, it seems the SoC falls in somewhere between a Snapdragon 845 and 855 in terms of performance, which is right where you’d expect it to be.

Overall, the LG V60 was a very good performer and offers amongst the best experiences in 2020 – although LG’s lack of a higher refresh rate screen does mean it doesn’t quite give the smoothness that other devices are able to provide – although that’s just a compromise between performance and battery life.

The LG Velvet was actually a bit disappointing for me, and it really reminded me that the processing power of today’s SoCs are actually being fully utilised for daily usage of the phones. It’s not that the Velvet was unusable or a slouch, but I immediately noticed that it wasn’t quite as well of a performer compared to say the V60. In general terms, I would say the phone feels more like a 2018 flagship device in terms of responsiveness.