In and Around the Antec P280

Just from looking at it, you can tell an awful lot has changed from the P183 to the P280. Antec kept the gunmetal gray finish for the door along with the double-hinge that allows you to keep it open, but everything else has moved, and that doesn't even begin to scratch the surface of what's changed internally.

But for starters, Antec's updated their port cluster. I'm not going to cry big buckets of tears over USB 3.0 gradually usurping eSATA as the port of choice for high speed data transfer, and Antec wisely places two USB 2.0 and two USB 3.0 ports at the top of the enclosure, above and outside of the door. Recognizing that users were also tired of having to open the front door just to power the enclosure on, their engineers also moved the power and reset buttons to the top of the case. The net result? Almost everything you need is still on the outside, while the door remains in place to muffle noise and hide the 5.25" drive bays. 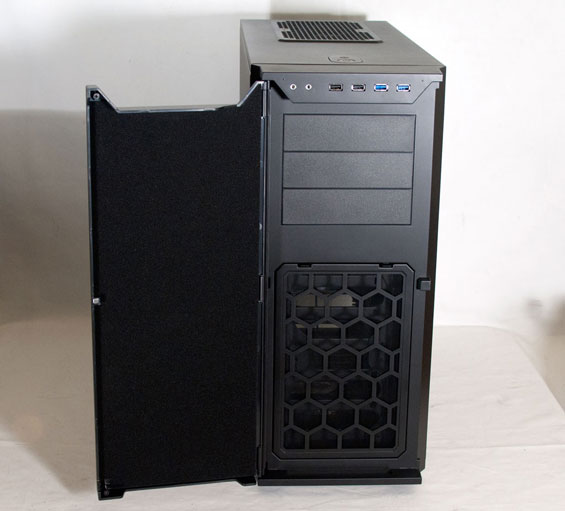 One thing I'm not as happy to see is the pair of 120mm exhaust fans on the top of the enclosure, but I recognize this as a concession for 240mm radiators and for what it's worth, Antec includes a copious amount of space inside the enclosure for exactly that purpose. The "spoiler" from the P182 is gone (having fallen by the wayside with the P183), and instead are just two exhaust fans wired to speed switches on the back of the enclosure.

When you get to the back, you'll see a very healthy nine expansion slots; the P280 supports XL-ATX motherboards, but honestly I'm a big fan of having these slots available in the first place. For larger multi-GPU configurations these can help space out the video cards better, and given the opportunity I'd definitely use the lion's share of them. There are the two usual rubber-lined grommet holes for the increasingly rarefied external liquid cooling radiator, but at the top there are also three switches for the Antec TwoCool fans installed in the exhaust positions as well as an opening for the switch for a fourth fan. Each of the fans functions in both a low and a high speed, and the P280 was tested with both fan speeds. 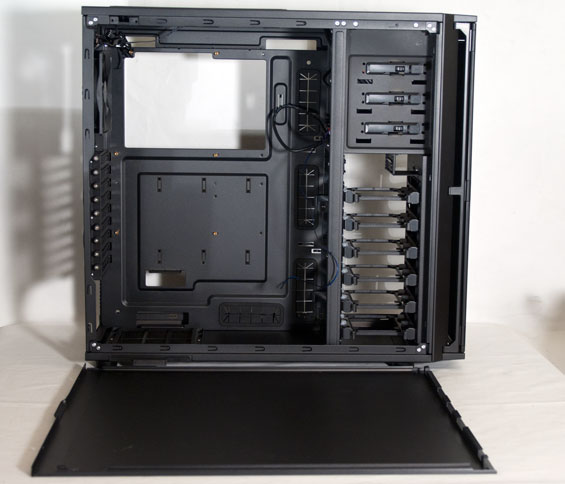 Pop the P280 open, though, and you may find yourself stunned at just how much has changed. The P180s are fantastic cases, but they're notoriously difficult to actually assemble. The P280, on the other hand, inherits a lot of the nicer features of Corsair's line and is geared towards being as easy to work with as possible. Toolless locking mechanisms for the 5.25" drive bays are in place, as well as six drive trays that can support both 3.5" and 2.5" drives, with silicone grommets for the 3.5" drives to minimize vibration. Above them is a small cage designed to toollessly mount a pair of 2.5" SSDs.

Where things have really changed is in the motherboard tray. There's now a massive cutout in the tray to maximize compatibility with aftermarket cooling, and rubber-lined holes surround the tray for routing cables to the back (where Antec has substantially increased the amount of space over the P180 line.)

Where the P280 excels is in the details. One of the two more interesting innovations is a molex-powered set of four 3-pin fan headers at the top and back of the case. While some users may be more inclined to use the on-board fan control of their non-Gigabyte motherboards (seriously Gigabyte, get with the program), this was actually a nice touch for the included TwoCool fans which have their own controls.

The other is a pair of internal 120mm fan mounts behind the drive cage. The idea is that by placing these mounts behind the cage, they're kept further away from the opening (and thus their sound is muffled more) while still being able to pull air in through the front ventilation. End users can employ either this pair or the outer pair on the other side of the drive cage, or even both for a push-pull configuration. It's a slick idea.

Finally, Antec opted to employ foam padding on the inside of the door but use a polycarbonate in the side panels. The result is an enclosure that maintains some of the acoustic dampening qualities of the P180 line while moving things forward a bit.

I'll be candid: I was more than a little psyched to test out the P280 after the Antec reps showed it to me and walked me through the design. This is a major departure from what I'm used to seeing from Antec, but it's a major departure in all the right ways. While some people may be a little peeved at losing the dual chamber design of the P180 line, I'm not particularly bothered by it. That dual chamber design is part of what made assembling the P180 series such a nightmare and I'm not sure it's even necessary anymore, but we'll see.