Performance consistency tells us a lot about the architecture of these SSDs and how they handle internal defragmentation. The reason we do not have consistent IO latency with SSDs is because inevitably all controllers have to do some amount of defragmentation or garbage collection in order to continue operating at high speeds. When and how an SSD decides to run its defrag or cleanup routines directly impacts the user experience as inconsistent performance results in application slowdowns.

To test IO consistency, we fill a secure erased SSD with sequential data to ensure that all user accessible LBAs have data associated with them. Next we kick off a 4KB random write workload across all LBAs at a queue depth of 32 using incompressible data. The test is run for just over half an hour and we record instantaneous IOPS every second.

We are also testing drives with added over-provisioning by limiting the LBA range. This gives us a look into the drive’s behavior with varying levels of empty space, which is frankly a more realistic approach for client workloads.

Each of the three graphs has its own purpose. The first one is of the whole duration of the test in log scale. The second and third one zoom into the beginning of steady-state operation (t=1400s) but on different scales: the second one uses log scale for easy comparison whereas the third one uses linear scale for better visualization of differences between drives. Click the buttons below each graph to switch the source data.

For more detailed description of the test and why performance consistency matters, read our original Intel SSD DC S3700 article.

Compared to the WD  Black2, there has certainly been improvement in the IO consistency area. When looking at the model equipped with IMFT's NAND (similar to the Black2), the line at ~5,000 IOPS is now much thicker, meaning that more IOs are happening at the 5K range instead of below it. Another big plus is that the IOPS no longer drops to zero, which is something that the Black2 constantly did. The minimum performance is still in the order of a few hundred IOPS, which compared to many competitors is not exactly great, but it is a start.

The model with Toshiba NAND performs substantially better. Even the 128GB model with the same 7% over-provisioning can keep the IOPS at around 3,000 at the lowest. The NAND can certainly have a play in steady-state performance and IO consistency as IMFT's 20nm 128Gbit NAND has twice the pages per block (512 vs 256) compared to Toshiba's A19nm 64Gbit NAND. More pages means that the erase time for each block is longer, which means that the controller may have to wait longer for an empty block. Remember that the drives are effectively doing read-modify-write during steady-state and the longer it takes to erase one block, the lower the performance will be.

It is likely that the drops in performance are caused by this but I am wondering if it's just a matter of poor optimization or something else. Technically it should be possible to achieve a steady line regardless of the NAND as long as the firmware is optimized for the specific NAND. In the end, the block erase times can be predicted pretty well, so with the right algorithms it should be possible to drop the maximum IOPS by a bit to achieve more consistent performance. For a low-end client drive, it is not that significant as the drives are very unlikely to be put under such heavy workload but I think there is still a chance to improve the IO consistency especially in the model with IMFT NAND.

To test TRIM, I first filled all user-accessible LBAs with sequential data and continued with torturing the drive with 4KB random writes (100% LBA, QD=32) for 30 minutes. After the torture I TRIM'ed the drive (quick format in Windows 7/8) and ran HD Tach to make sure TRIM is functional. 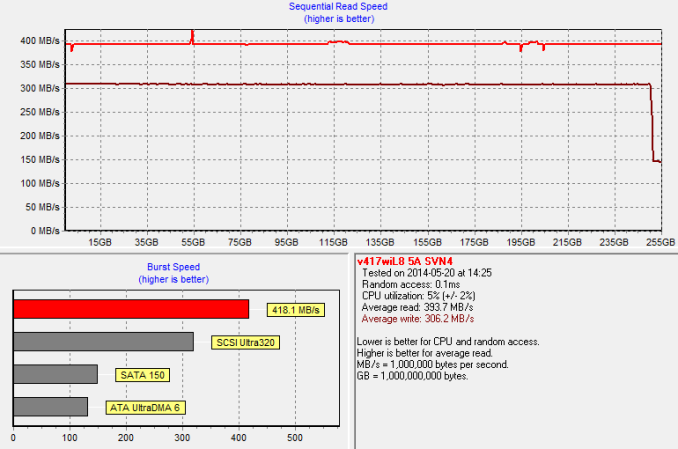