FSP put a lot of effort into making the Aurum PT 1200W aesthetically unique. The 190mm chassis is sprayed with a textured grey paint, creating a sandpaper-like feeling to the touch. The paint is so thick that the embossed company logo on the sides of the unit is hardly noticeable. A sticker with the electrical specifications and certifications of the PSU can be found at the top of the chassis. Meanwhile, the fan opening and the finger guard are hexagonal, not round, with a silver frame surrounding them. 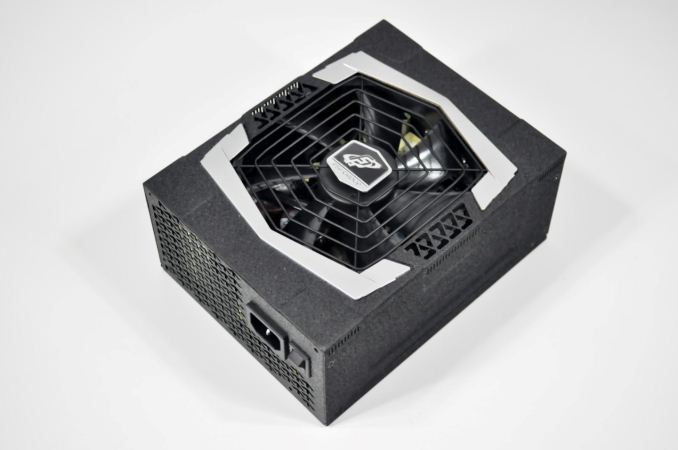 As with any fully modular PSU that has this kind of power output, the front side of the FSP Aurum PT 1200W is littered with the connectors for the modular cables. The connectors for the PCI-E and CPU cables look identical at first, but the two bottom connectors are for the CPU power cables only and the other four are for the PCI-E power cables only. They are keyed so it is not possible to insert the cable into the wrong connector.

The rear of the Aurum PT 1200W holds some special interest. Usually, the rear of a PSU is boring, with only the AC receptacle and on/off switch to be seen, with the rest of the surface being perforated so the hot air can exit the case. Instead of going with a round or honeycomb perforation pattern, FSP is using an arrow-like design that supposedly shifts the airflow upwards. By using our Extech HD350 pitot, we found this to be true, as the primary direction of the flow has indeed been shifted upwards.

FSP claims that this somehow enhances the cooling performance of the unit. Unfortunately, while we can confirm their design "works" as intended, we fail to see how shifting the airflow upwards can affect the performance in any given way. In fact, the shift of the flow indicates that there is substantial aerodynamic resistance, so the perforations may actually impede airflow. We'll see how this plays out when we get to the cooling performance.

A simple, black fan from Power Logic is responsible for the cooling of the FSP Aurum PT 1200W. The fan has a hydro-dynamic bearing and a maximum speed of 2000RPM. The manufacturer claims that this fan has a maximum airflow of 111.1CFM, but our instrumentation registered the actual maximum airflow as 84.1CFM. 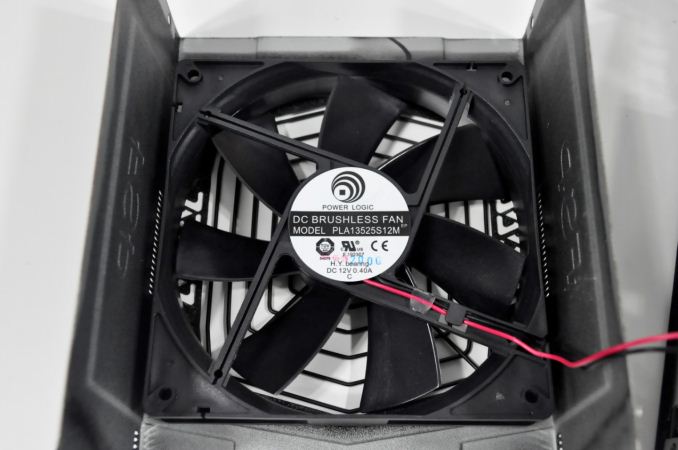 The Aurum PT 1200W obviously comes from FSP in this case. FSP designs, tests, manufactures, and markets these units. The heatsinks perhaps are the first thing that makes an impression, as they are very small for a 1200W PSU. Very small and thin plate heatsinks cool the secondary side components, while a larger black heatsink holds the APFC and primary inversion transistors. In addition, a small black heatsink has the two parallel bridge rectifiers attached to it.

What is really interesting about the FSP Aurum PT 1200W is that it does not use any technologies that can be considered exotic by today's standards. It technically is "just" a full bridge inversion configuration with DC-to-DC conversion on the secondary side, yet it manages to reach an 80 Plus Platinum certification. FSP achieved that by simply using some of the best active components available today, with very low resistance and gate charge values. Such components have maximum efficiency and very low thermal losses, but they are also much more expensive than more common components, which explains the retail price tag of the Aurum PT.