ARM Challenging Intel in the Server Market: An Overview

Before we can discuss the ARM server SoCs, we want to look at what they are up against: the current low end Xeons. We have described the midrange Xeon E5s in great detail in earlier articles.

The Xeon E3-12xx v3 is nothing more than a Core i5/i7 "Haswell" dressed up as a server CPU: a quad-core die, 8MB L3 cache, and two DDR3 memory channels. You pay a small premium – a few tens of dollars – for enabling ECC and VT-d support. Motherboards for the Xeon E3 are also only a few tens of dollar more expensive than a typical desktop board, and prices are between the LGA-1150 and LGA-2011 enthusiast boards. The advantages are remote management courtesy of a BMC, mostly an Aspeed AST chip.

For the enthusiasts that are considering a Xeon E3, the server chip has also disadvantages over it's desktop siblings. First of all, the boards consume quite a bit more power while in sleep state: 4-6W instead of the typical <1W of the desktop boards. The reason is that server boards come with a BMC and that these boards are supposed to be running 24/7 and not sleeping. So less time is invested in reducing the power usage in sleep mode: for example the voltage regulators are chosen to live long. Also, these boards are much more picky when it comes to DIMMs and expansions cards meaning that users have to check the hardware compatibility lists for the motherboard itself. 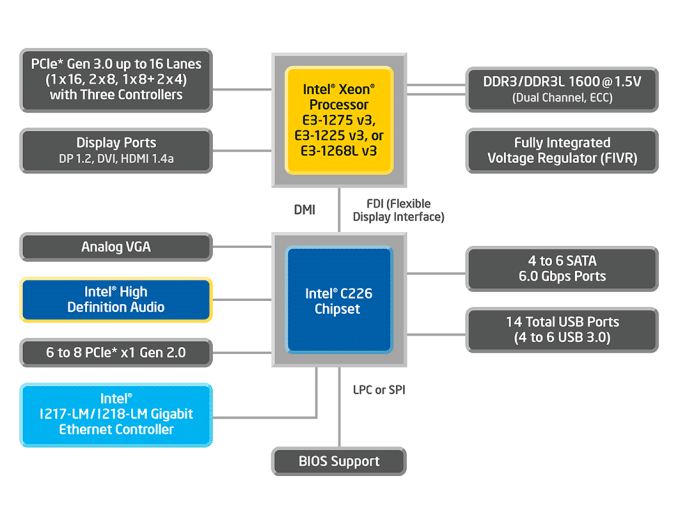 The weak points are the limited memory channels (bandwidth), the fact that Xeon E3 server is limited to eight threads, and the very limited (for a server) 32GB RAM capacity (4 Slots x 8 DIMMs). Intelligent Memory or I'M is one of the vendors that is trying to change this. Unfortunately their 16GB DIMMs will only work with the Atom C2000, leading to the weird situation that the Atom C2000 supports more memory than the more powerful Xeon E3. We'll show you our test results of what this means soon.

The Atom C2000 is Intel's server SoC with a power envelope ranging from 6W (dual-core at 1.7GHz) to 20W (octal-core at 2.4GHz). USB 2.0, Ethernet, SATA3, SATA2 and the rest (IO APIC, UART, LPC) are all integrated on the die, together with four pairs of Silvermont Cores sharing 1MB L2 cache. The Silvermont architecture should process about 50% more instructions per clock cycle than previous Atoms due an improved branch prediction, the loop stream detector (like the LSD in Sandy Bridge) and out-of-order execution. However the Atom micro architecture is still a lot simpler than Haswell.

Silvermont has much smaller buffers (for example, the load buffer only has 10 entries, where Haswell has 72!), no memory disambiguation, it executes x86 instructions (and not RISC-like micro-ops), and it can process at the most two integer and two floating point instructions, with a maximum of two instructions per cycle sustained. The Haswell architecture can process and sustain up to five instructions with "ideal" software. AES-NI and SSE 4.2 instructions are available with the C2000, but AVX instructions are not.

The advantages of the Atom C2000 are the low power and high integration -- no additional chip is required. The disadvantages are the relatively low single-threaded performance and the fact that the power management is not as advanced as the Haswell architecture. Intel also wants a lot of money for this SoC: up to $171 for the Atom C2750. The combination of an Atom C2000 and the FCBGA11 motherboard can quickly surpass $300 which is pretty high compared to the Xeon E3.