Build-A-Rig Round 2, SilverStone vs. Crucial: The $800 PC Showdown

First on our list is to see how well these builds will do as "daily drivers" when used for general tasks (e.g. not gaming). While office workloads have traditionally been CPU-bound they have also traditionally been light on parallelism, meaning the benefits of multi-core CPUs haven’t always been consistent. What we have coming will be an interesting look in the tradeoff between more threads via Hyper-Threading and more clock speed.

Meanwhile I’ve also gone ahead and thrown in the overclocked numbers on the Mighty Milo since it was an overclocking-capable setup. The primary focus for this article is on stock performance, but it gives us a second look at what Mighty Milo can do with its overclocking abilities taken into account. 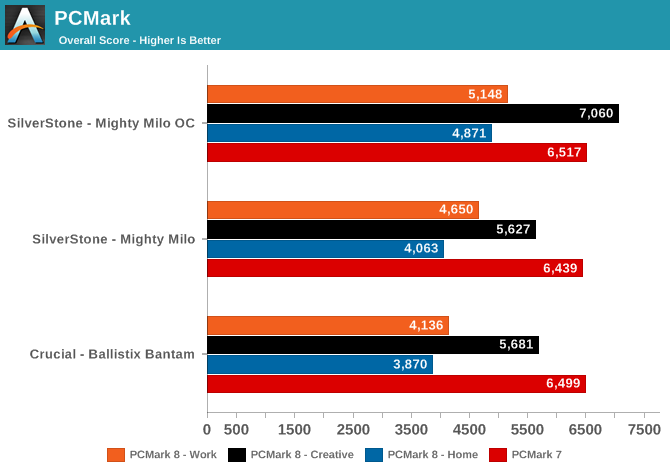 On PCMark 7 the two systems are neck-and-neck. However on PCMark 8 the systems start pulling apart, with Mighty Milo taking the lead. The Work subtest in particular gives Mighty Milo a clear advantage, most likely due to the advantages of OpenCL acceleration on a faster video card.

Moving on, we have CINEBENCH R15, an image rendering benchmark. CINEBENCH provides three benchmark modes - OpenGL, single threaded and multi-threaded. Evaluation of select PCs in all three modes provided us the following results. 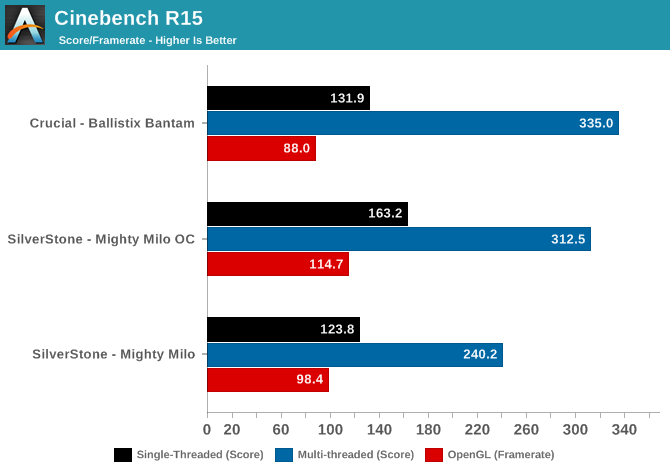 Single threaded performance on Cinebench is essentially a product of IPC and clock speed. With both systems here housing Haswell chips the competition drops down to a simple clock speed war with the Mighty Milo dragging behind at stock speeds and pulling a nice lead after pushing the clocks up. Though when we move to the multithreaded test the Hyper-Threading featured by the Ballistix Bantam’s Core i3-4170 trumps the overclocked Milo and sends them home with a silver medal.

On the GPU front SilverStone’s build simply has a faster GPU, and apparently is leaving a large chunk of performance on the table at stock. This is a trend that we will see form with this computer as the Mighty Milo continues to open up with more clock speed.

For a look at video encoding performance we have results courtesy of x264 HD Benchmark v5.0. This is simply a test of CPU performance with good scaling with both core count and individual core performance. 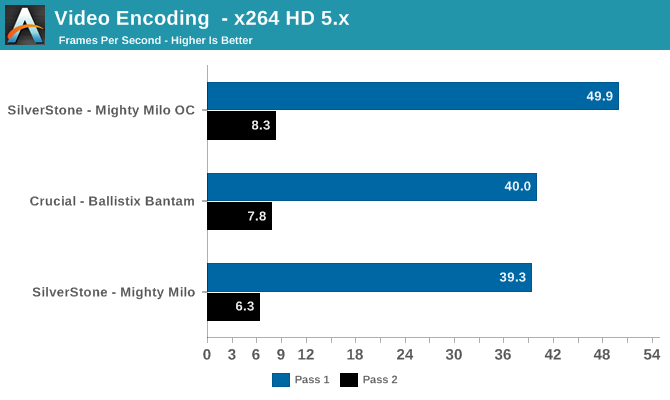 We see much the same trend developing here with x264. At stock the Crucial system holds the lead thanks to its faster Core i3 processor, though by the time we reach pass 2 things are surprisingly close. Otherwise when overclocked the Mighty Milo’s much higher clockspeed lets it really open up.

Up next, 7-Zip is a very effective and efficient compression program, often beating out OpenCL accelerated commercial programs in benchmarks even while using just the CPU power. 7-Zip has a benchmarking program that provides tons of details regarding the underlying CPU's efficiency. In this subsection, we are interested in the compression and decompression MIPS ratings when utilizing all the available threads. 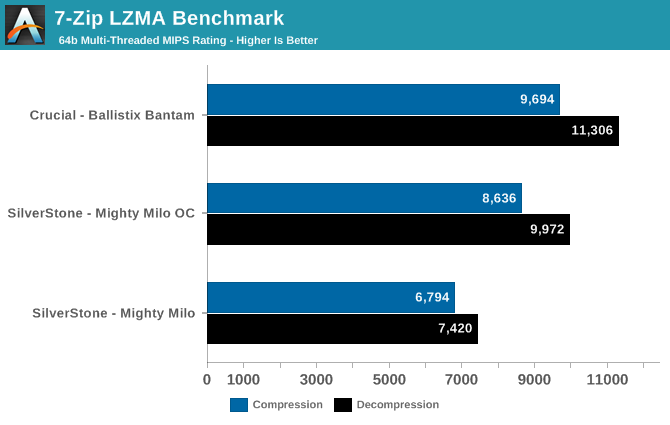 Decompression is one area I definitely felt was lacking while setting up the Mighty Milo for testing. Any file that I decompressed appeared to do so much slower than I was used to. Sure enough the numbers came and confirmed my observations. Here overclocking helps but ultimately the Core i3 in Crucial’s build provides a slightly better experience, reiterating that overclocking alone can’t always make up for a difference in performance-enhancing features.

Meanwhile, as businesses (and even home consumers) become more security conscious, the importance of encryption can't be overstated. TrueCrypt is a popular open-source disk encryption program can take advantage of the AES-NI capabilities of modern processors, and even though TrueCrypt is no longer under development, its internal benchmark provides some interesting cryptography-related numbers to ponder.

We saw these results before in Ian's review of the G3258. One big drawback of Intel's entry-level CPUs is the lack of hardware AES cryptography support. Due to this we see the Core i3-4170 offering nearly ten times the throughput of the Pentium, even a respectable overclock hardly put a chip in the gap (no pun intended). Many don't feel the need for cryptography support. But anyone that uses it on a regular basis will definitely appreciate, and possibly even need, the added performance.

Agisoft PhotoScan is a commercial program that converts 2D images into 3D point maps, meshes and textures. The program designers sent us a command line version in order to evaluate the efficiency of various systems that go under our review scanner. The command line version has two benchmark modes, one using the CPU and the other using both the CPU and GPU (via OpenCL). The benchmark takes around 50 photographs and does four stages of computation:

We record the time taken for each stage. Since various elements of the software are single threaded, others multithreaded, and some use GPUs, it is interesting to record the effects of CPU generations, speeds, number of cores, DRAM parameters and the GPU using this software. 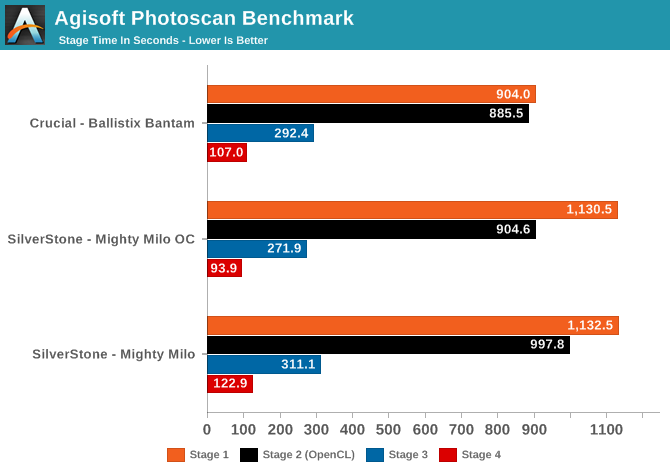 Thanks to its more powerful Core i3 CPU, Crucial’s Ballistix Bantam pulls a win here. The lack of AVX and HT really hits the Mighty Milo, especially in the time-intensive first stage. Even overclocked, the Milo can improve on the shorter, latter stages, but it can’t close the gap on stage 1.

Our next system performance benchmark is the Dolphin Emulator. This is again a test of the CPU capabilities, and how well a CPU can handle emulating the Nintendo Wii’s PowerPC 750 CPU.

Dolphin is a pretty straightforward lightly-threaded CPU throughput test. At stock the faster Crucial system holds the advantage, otherwise the heavily overclocked SilverStone system can really run down the score.

Last but not least, we have a slightly more specialized test with Iperf. The network bandwidth testing tool gives us a look at the performance of the included 2x2:2 802.11ac Wi-Fi solutions in each build.

I'm not sure if I should be surprised here from the results. I was expecting to see some crazy numbers having a couple of wireless ac motherboards to work with here. Turns out that not all 802.11ac setups are created equal. My first assumption is that the antennas on the Mighty Milo are just not in as ideal a location being planted on the back of the machine, while for lack of better creativity even having the Ballistix Bantam's antenna stuck to the side of the case yielded numbers that while not amazing are still appreciably better than any real world 802.11n bandwidth I've seen.

I was a mix of surprised, confused, and then disappointed over the Wi-Fi performance of the Mighty Milo. After some quick research to see what I was doing wrong though I found that my measurements were in line with those found by previous journalists who had hands-on time with this motherboard.

Now that we have had a look at general system performance let's go and see how they do when we want to have a little fun.