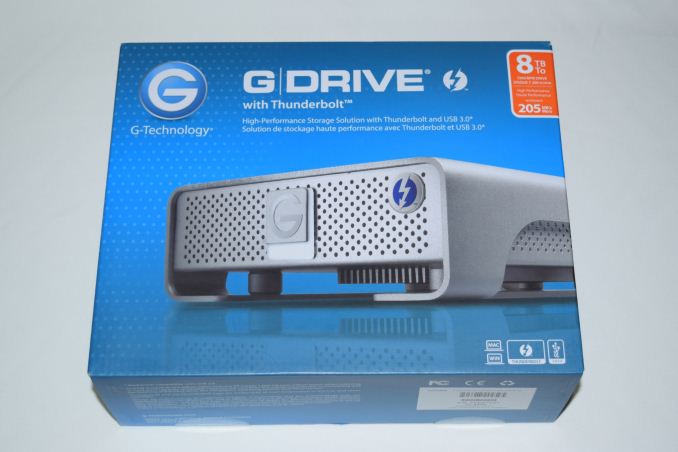 We have not published any hands-on reviews of G-Technology's products till now. Keeping that in mind, G-Technology wanted to start us off with one of their basic offerings - the G-Drive with Thunderbolt. The 8TB version packs a HGST Ultrastar He8 3.5" SATA hard-drive in a sealed enclosure with one Thunderbolt port and one USB 3.0 port. At any given point of time, either device port can be used to access the drive. The G-Technology G-Drive with Thunderbolt 8TB currently sells for $600. The HGST Ultrastar He8 sells for approximately $500 (the official version with warranty from HGST), putting the cost of an all-aluminum, Thunderbolt + USB 3.0 enclosure at $100. As far as the premium for Thunderbolt peripherals go, the pricing is not outrageous. That said, we must keep in mind that the device uses the first-generation Thunderbolt silicon / mini-DP-type port.

The G-Drive with Thunderbolt package comes with a 24W (12V @ 2A) adapter in addition to a Thunderbolt and a USB 3.0 cable. A quick-start guide is also included. 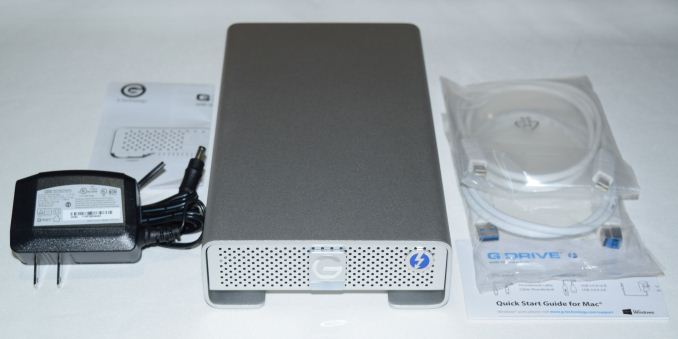 The industrial design of the product is excellent, and the aluminum chassis with the curved edges provides a stylish and premium look. A Thunderbolt logo in the front panel differentiates it from the other single-bay USB products in the G-Technology lineup. A white LED beneath the G-Technology logo indicates the power / hard drive access status.

The gallery above shows the layout of the rear panel - a Kensington lock, a USB 3.0 Type-B female port, a Thunderbolt port, the power inlet and an explicit on/off switch. The underside also sports a ridged segment to aid in taking away heat from the component in contact with it on the inside.

Getting access to the internals of the unit is a matter of removing a few screws from the frame that serves to keep the main part of the chassis raised. Unfortunately, doing so voids the warranty. 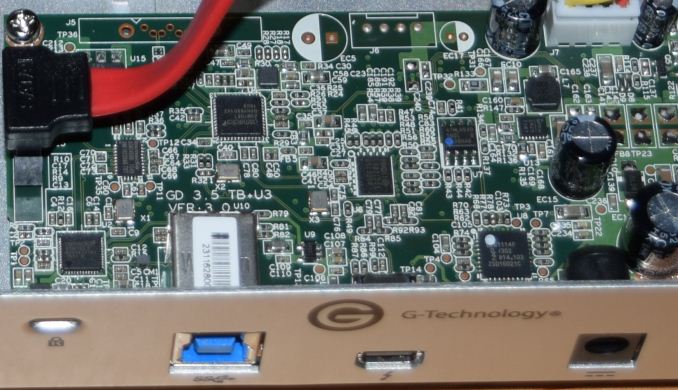 A close-up view of the board reveals the various chips making the product work. From the bottom left, we can see the following as we trace an arc to the right.

Apple users are the main target market for G-Technology. Therefore, the internal hard drive comes pre-formatted in HFS. We connected the unit to our Skylake DAS testbed using a StarTech.com Thunderbolt 3 to Thunderbolt adapter. The same Type-C port in our testbed was also used to connect the unit over USB 3.0 (using the appropriate Type-C to Type-A cable adapter). After re-formatting the disk in NTFS, our first task was to take a look at the CrystalDiskInfo reports from both interfaces. 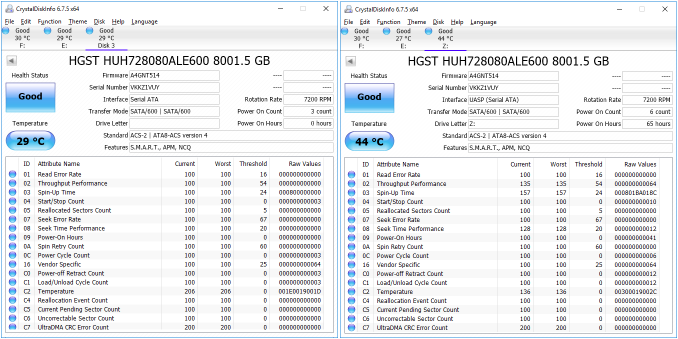 We get confirmation of UASP support over the USB interface. Over Thunderbolt, the device appears as a regular SATA drive. S.M.A.R.T read-out is supported over both interfaces for drive monitoring.

Our testing methodology for DAS units takes into consideration the usual use-case for such devices. The most common usage scenario is transfer of large amounts of photos and videos to and from the unit. The minor usage scenario is importing files directly off the DAS into a multimedia editing program such as Adobe Photoshop. Prior to taking a look at the real-life benchmarks, we first check what CrystalDiskMark reports for the G-Drive with Thunderbolt 8TB over both the available interfaces.

For the most part, the performance numbers meet G-Technology's claims. Sequential workloads can easily sustain 200 MBps over the fastest platter tracks. However, the USB 3.0 bridge chip seems to have some trouble with high queue-depth sequential accesses, as the results for those particular traces don't match up with what we observe over the Thunderbolt connection. This is because the ASMedia ASM1053 has a SATA II interface. SATA II doesn't support some of the advanced NCQ (native command queueing) features that are part of the SATA III specifications. However, for the 1MB sequential accesses at low queue depths, the USB 3.0 and Thunderbolt interfaces perform very similar to each other.

In order to tackle the first real-life use-case, we created three test folders with the following characteristics:

Each of the above folders was transferred from a RAM drive to the DAS unit and back to the RAM drive thrice. The average of the three transfer rates is recorded in the table below for each type of content.

The above benchmark run was also instrumented to record the drive temperature as well as instantaneous transfer rates during the process. The internal disk temperature never crossed 50 C even after more than 127 GB of writes and 127 GB of reads continuously. 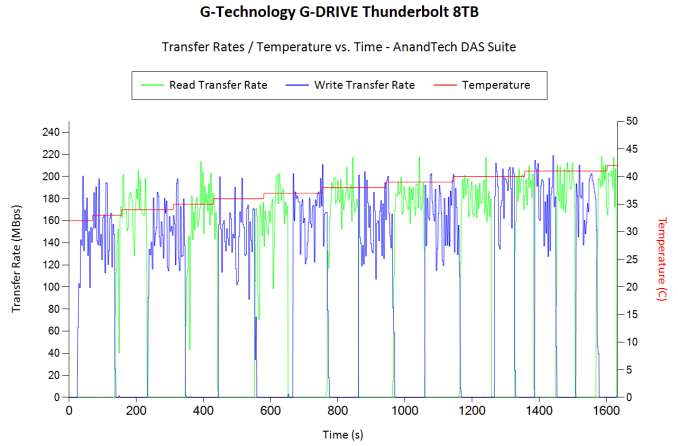 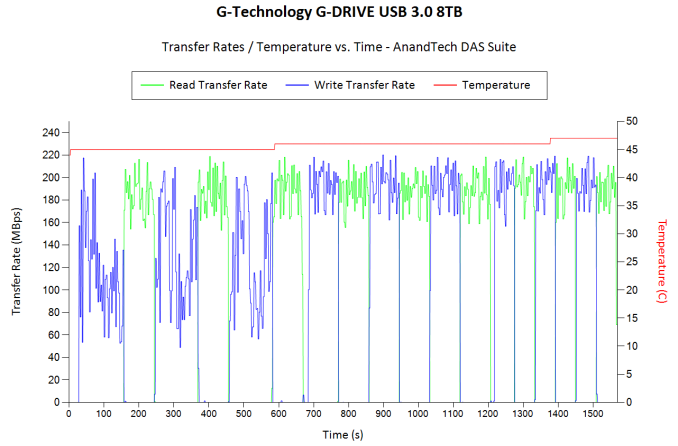 For the second use-case, we take advantage of PC Mark 8's storage bench. The storage workload involves games as well as multimedia editing applications. The command line version allows us to cherry-pick storage traces to run on a target drive. We chose the following traces.

Usually, PC Mark 8 reports time to complete the trace, but the detailed log report has the read and write bandwidth figures which we present in our performance graphs. Note that the bandwidth number reported in the results don't involve idle time compression. Results might appear low, but that is part of the workload characteristic.

Even though these use-cases are part of the typical multimedia workflow, we don't expect this particular device to be used for such purposes. However, the results are just presented here for the sake of completeness

The G-Drive with Thunderbolt is externally powered, and the power consumption for a device that might be always attached to a host PC is definitely an aspect to investigate. The power consumption numbers for different types of workloads (as tested by CrystalDiskMark) over both interfaces are presented below. These are at-wall numbers measured using the Ubiquiti Networks mFi mPower Pro.

The G-Drive with Thunderbolt 8TB version is a high-capacity DAS unit with a praiseworthy industrial design. The chassis construction is stylish while being practical. The rubber feet and raised profile for the hard drive cage aid in improving the thermal characteristics. The unit is also well-built, sturdy and appears to be durable.

Positives aside, we are unable to fathom the utility of this particular member of the G-Drive lineup over something like the G-Drive USB. The Thunderbolt part has no daisy chaining capabilities (there is only one Thunderbolt port). The high-speed capabilities of Thunderbolt are wasted with a single hard drive at the other end. In addition, the USB 3.0 bridge chip (ASMedia ASM1053) is a bit dated and appears to get hampered under heavy request loading in our tests because the hard drive operates in the SATA II mode when that path is active.

We believe it makes better sense for G-Technology to use Thunderbolt for multi-drive enclosures only and keep single-drive ones as USB 3.0-only DAS units. Another aspect that could be improved in the current unit is the ability for end-users to access the internal drive without voiding the warranty.

Coming to the pricing aspect, the G-Drive with Thunderbolt / USB 3.0 8TB version has a MSRP of $600. For the same MSRP, the G-Drive USB comes with a 10TB drive. In most scenarios, the extra 2TB will be worth much more than a Thunderbolt port connected to a product with a hard drive and no daisy-chaining capabilities. Multimedia professionals involved in photo and video capture / editing have different use-cases / usage scenarios for their data. To G-Technology's credit, they have hard-drive enclosures catering to all of those scenarios. If you are in the market for a high-capacity external DAS from their lineup, it would be prudent to evaluate the various options carefully before making a purchase decision.