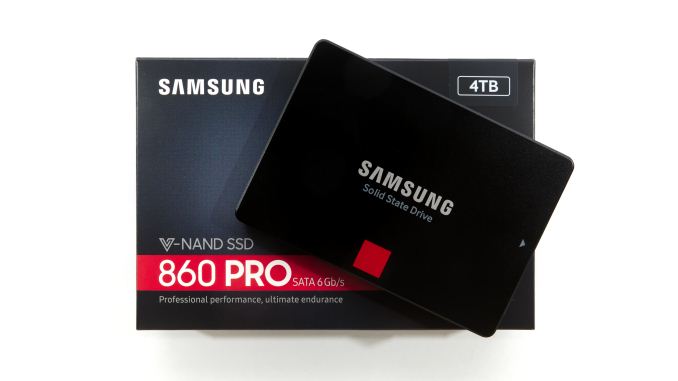 After more than three years of ruling the consumer SATA SSD market, the Samsung 850 series is being replaced. The 850 PRO and 850 EVO that first brought 3D NAND flash memory to the consumer SSD market are being retired to make room for the new 860 PRO and 860 EVO SSDs. The new 860 drives are not revolutionary the way the 850s were, but instead represent continued evolution of Samsung's SSD technology.

The 850 series, while a rock of the SATA SSD market, has not remained unchanged from its introduction in 2014. In mid 2015, Samsung introduced 2TB models of the 850 PRO and 850 EVO, and inside the new models was an updated controller with support for enough LPDDR3 DRAM to manage 2TB of flash. In 2016, Samsung updated the entire 850 series to use their third-generation 48-layer 3D NAND. This new NAND didn't bring any significant performance changes, but because the capacity per die doubled, the available drive capacity options shifted: the 120GB and 128GB models were retired, and a 4TB 850 EVO was introduced. A 4TB 850 PRO was promised, but never shipped: disappointing yields from Samsung's 48L 3D NAND helped kick off an industry-wide shortage of NAND flash memory that drove prices way up and guaranteed a 4TB 850 PRO would nearly impossible to sell profitably.

The technological changes the 860 series brings are no bigger than what the 850 series has already undergone. The NAND flash memory is updated once again, this time to Samsung's 64-layer 3D NAND. The whole product line is moving over to the latest MJX SSD controller, and the DRAM used will now be LPDDR4. The 4TB PRO model is finally being released, but there are no further capacity increases coming at this time, and the entry level is still the same 250/256GB.

Looking at the numbers, the performance specifications are barely changed from the 850 series, and this is because the SATA interface hasn't gotten any faster since the 850 was introduced. The write endurance ratings have been simplified however: write endurance is now proportional to drive capacity even at the high end, and the 860 PRO's endurance is twice that of the 860 EVO's at each capacity point.

The most notable change is the reduction of the PRO's warranty period from the outstanding 10 years down to the same 5 years as the 860 EVO. The other big surprise is that there will be mSATA versions of the 860 EVO; this is the first major new mSATA SSD in a long time, as most product lines have abandoned it in favor of M.2 SATA. The 860 EVO will introduce a 2TB option to Samsung's M.2 SATA lineup.

For the first few years, the Samsung 850 PRO and 850 EVO were essentially unchallenged in the SATA SSD market. All of their most successful competitors were slower and cheaper, because nobody could match Samsung's performance. That changed in 2017 when several of Samsung's biggest competitors beat them to the introduction of 64L 3D NAND in the consumer SATA market. Drives like the Intel 545s, SanDisk Ultra3D and Crucial MX500 have renewed competition for mainstream consumer SSDs by matching or beating Samsung's performance while putting pressure on their pricing. Samsung's response is due. By keeping the MLC-based PRO tier while their competition is almost entirely switching to TLC NAND, Samsung will likely hold on to some performance crowns with their premium product, and they'll have the highest write endurance. But the more mainstream 860 EVO will have to fight for its place in the market.

Samsung's decision to keep the PRO tier around and based on MLC NAND signals that they will almost certainly do the same for their PCIe SSDs. Whatever they introduce as the successor to the 960 PRO will probably stand out from the crowd in a way that their premium SATA SSDs cannot. Samsung's NVMe SSD controllers still seem to be the fastest options, though competitors like Silicon Motion and Phison are starting to catch up.