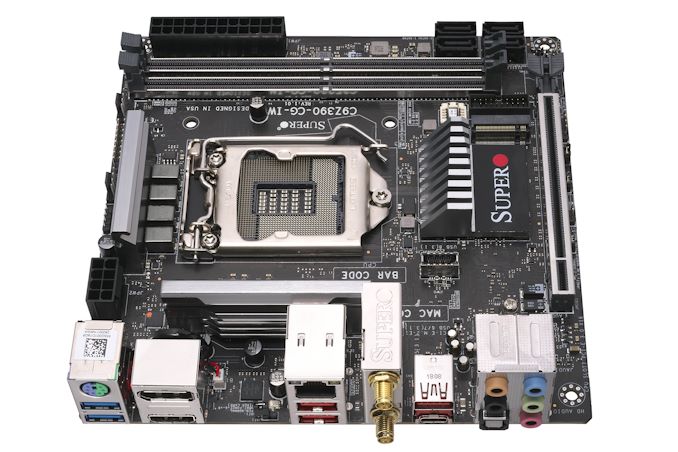 Taking us into the weekend, we have a new giveaway courtesy of the always awesome Supermicro. The company has sent our community team one of their Z390 Mini-ITX motherboards, the C9Z390-CG-IW, and one lucky ready is going to win it. So if you’re angling to build a new Mini-ITX system around one of Intel’s Socket 1151 9th Gen Core CPUs, then this may be just the part you need to get started.

The C9Z390-CG-IW is essentially a miniaturized version of Supermicro’s well-regarded ATX sized C9Z390-CG, taking a lot of the important elements from that board and putting it in a mini-ITX sized frame. There is a full-length PCIe 3.0 x16 slot with steel slot reinforcement and the board also includes two PCIe 3.0 x4 M.2 slots; one on the front and one on the rear. Also included are four SATA ports which feature straight-angled connectors.

Controller-wise the board is using a Realtek ALC1220 HD audio codec to power the five 3.5 mm audio jacks and S/PDIF optical output on the rear, an Intel I219V Gigabit controller for the single LAN port and a dual-band 802.11ac wireless networking adapter is also included. The rest of the rear panel is comprised of three USB 3.1 Gen2 Type-A, one USB 3.1 Gen2 Type-C, two USB 3.0 Type-A ports, a PS/2 combo port and a pair of display outputs consisting of a DisplayPort 1.2 and HDMI 2.0 ports.

The giveaway is running through June 21st and is open to all US residents. You can find the full discussion about the giveaway over on the AnandTech Forums.