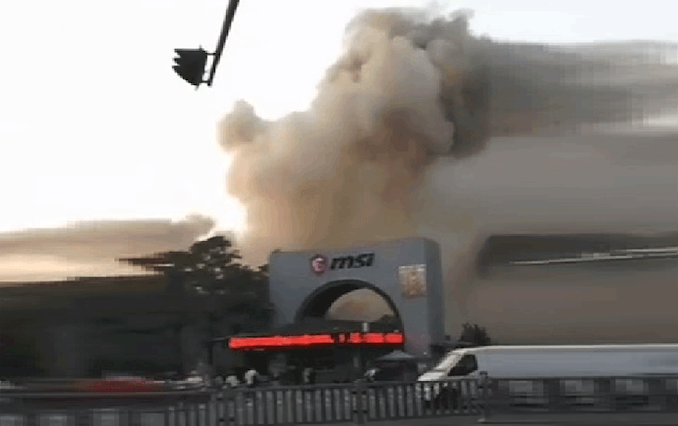 After initial reports through third-party sources on social media, MSI has confirmed to AnandTech that there has been an incident at one of its largest manufacturing facilities in Bao’an, China. MSI reports that no injuries were caused, and no damage was done to any production lines. This facility/factory is responsible for manufacturing PCBs for a wide range of components, including (but not limited to) motherboards, graphics cards, laptops, servers, small-form-factor devices, and industrial installations.

MSI confirmed that the a large amount of smoke was generated at the Bao'an facility on the afternoon of November 5th. The company also states that emergency measures were enacted, and the fire department was called out and able to get the incident under control. MSI claims that no production lines were damaged in the incident, and there should not be any issues with future production. We suspect that there shouldn't be any issues with storage/stock/distribution of models either, however usually with an incident like this, investigations happen and extra training is enacted, which may have knock on effects to production.

The Bao’an facility is one of a number of locations that MSI uses for its components. For example, notebooks and pre-built desktops are assembled in Shanghai, but those require components from elsewhere. A video was posted to Reddit showing the extent of the fire.

It should be noted that supply of RTX and Radeon GPUs that are due for sale over the next few weeks are likely to already be in the distribution channel. So if there is any hiccup in production (MSI says there won't be), it would more likely be seen around a month from now. However, that won't stop the company potentially redirecting stock to its higher margin markets if needed.

We have reached out to MSI for more information, with an expected official statement to follow.

Update: Official statement is as follows:

A fire accident occurred in MSI Baoan factory in Shenzhen on November 5th afternoon. MSI activated its emergency measures and notified the fire department to deal with it immediately. No injuries were caused and the production line was not damaged. In the future, MSI will continue to strengthen the education and training of personnel. At present, all units are operating normally. Thank you for your concern.