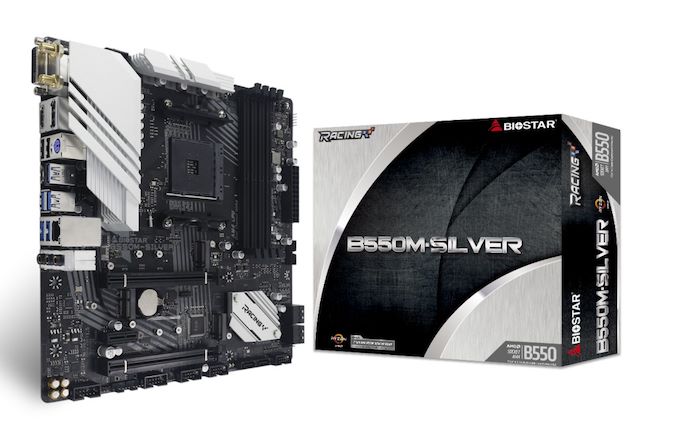 Biostar has launched its latest AMD B550-based board, the B550M-Silver. Aimed at gamers looking to use AMD's latest Ryzen 5000 processors, it brings a host of premium features to the micro-ATX form factor with USB 3.2 G2 connectivity, a Realtek 2.5 Gb Ethernet controller, Wi-Fi 6, and PCIe 4.0 support.

Over the last couple of years, premium AMD micro-ATX boards have been few and far between, with the majority of vendors opting to release their micro-ATX models on the more budget-friendly chipsets such as AMD's A520. The micro-ATX form factor typically offers a convenient compromise, with more expansion slot support than the smaller mini-ITX form factor, but without the overall footprint of ATX. Based on the AMD B550 chipset, the Biostar B550M-Silver offers out of the box support for Ryzen 5000 processors, with support for Ryzen 3000 chips too. 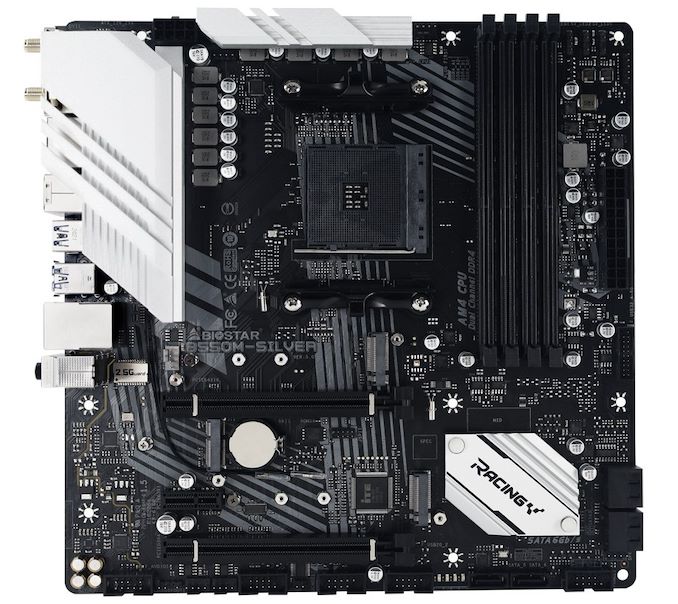 Focusing on the design, the Biostar B550M-Silver uses a wave of silver heatsinks, including a large rear panel cover, which doubles up as one section of the power delivery heatsink. It includes no integrated RGB LED lighting nor any RGB headers, which is either quite strange or a welcome relief given how common RGB is these days in boards aimed at gamers.

The Biostar B550M-Silver includes dual PCIe M.2 slots, with the top slot capable of supporting up to PCIe 4.0 x4 2280 M.2 drives, while the second slot includes support for PCIe 3.0 x4; both of these slots can accommodate SATA based SSDs. For SATA, Biostar includes six SATA ports, with two straight-angled and four right-angled ports, with support for RAID 0, 1, 10 arrays. There are four memory slots with support for DDR4-4933, with a maximum capacity of up to 128 GB.

There are two full-length slots at PCIe support, including a PCIe 4.0 x16 and a PCIe 3.0 x4 slot, with a PCIe 3.0 x1 slot sandwiched in between. Located under the full-length PCIe 4.0 x16 slot is a Key-E 2230 slot, although the board already includes an integrated wireless module.

On the rear panel is a variety of connections, including a single USB 3.2 G2 Type-A, one USB 3.2 G2 Type-C, four USB 3.2 G1 Type-A, and two USB 2.0 ports. There is a trio of video outputs including an HDMI, DisplayPort, and DVI-D for use with AMD's 3rd gen APUs, while the board's three 3.5 mm audio jacks are powered by an older Realtek ALC1150 HD audio codec. A PS/2 keyboard and mouse combo port sits above the USB 2.0 ports, while a single RJ45 port is powered by a Realtek RTL8125B 2.5 GbE controller, while Biostar is using an unspecified wireless interface with support for Wi-Fi 6.

At present, we don't know when the Biostar B550M-Silver will hit retail shelves, nor do we have information in regards to the pricing.

Update - Biostar has informed us that the B550M-Silver has an MSRP of $119, which represents fantastic value with 2.5 GbE and Wi-Fi 6 networking.