The MSI Z590 Godlike, Comparing it to the Z490 Godlike

One of MSI's most prominent motherboard ranges is its Godlike series, set as the premium model no matter which platform it is aimed at. As Intel has recently launched its new Z590 desktop chipset, MSI got in contact and shipped us a qualification sample of the new Z590 Godlike model. Designed as the flagship motherboard, in this article we are looking at how the MSI MEG Z590 Godlike has changed from the previous generation for Intel's Rocket Lake processors.

The MSI Godlike: A Brief History

Looking back at MSI's premium model history, the Godlike first made an appearance in 2016 back on Intel's X99 chipset - designed for Intel's Broadwell-E HEDT processors, the MSI X99A Godlike Gaming Carbon used carbon fiber styled aesthetics. The MSI X99A Godlike Gaming followed an more punchy aesthetic with lots of red heatsinks, although both models featured a range of high-end controllers for the time.

The Godlike then became a mainstay in MSI's motherboard ranges from 2017. The MSI Z370 Godlike Gaming was built for Intel's Coffee Lake processors, and this variant featured a black and silver design with integrated RGBs. Ever since, the MSI Godlike has been the brand's flagship, making its presence known as a high-end model with the latest and greatest controller sets and being well-positioned to take advantage of both Intel and AMD's latest chipset designs.

The MSI MEG Z590 Godlike is the latest iteration from MSI, designed for Intel's impending Rocket Lake (11th gen) processors and supporting 10th generation Comet Lake processors. The benefits of Rocket Lake include PCIe 4.0, as well as double bandwidth to the chipset, encouraging users to make the plunge into Z590 if they're investing in a new system.

For this analysis, we're comparing the two Godlike boards: the Z590 with the Z490. Much of the PCB layout between both models are very similar, with most of the differences coming from slightly different controller sets and connectivity. 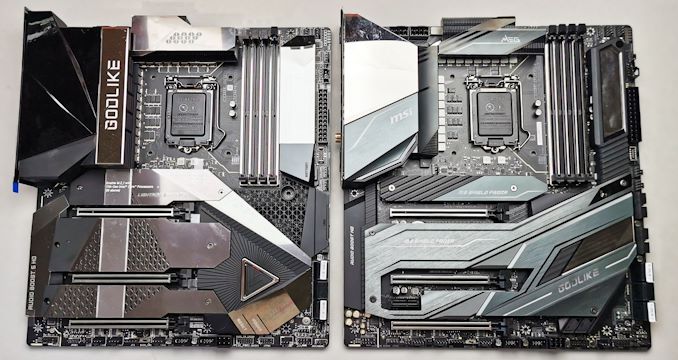 The design of MSI MEG Z590 Godlike employs a visually impressive set of silver and black heatsinks throughout the board, including a stylish clear panel built into the rear panel cover, which includes an MSI Dragon theme with integrated RGB LEDs. This is slightly different from the MSI MEG Z490 Godlike, which uses a primarily black design with dark grey metallic heatsinks. Both Godlike models include its Dynamic Dashboard II OLED panel just to the memory slots' right-hand side. The newer Z590 Godlike has a cleaner look with a vertical silver line through the three M.2 heatsinks and in parallel with the Godlike logo on the rear panel cover. 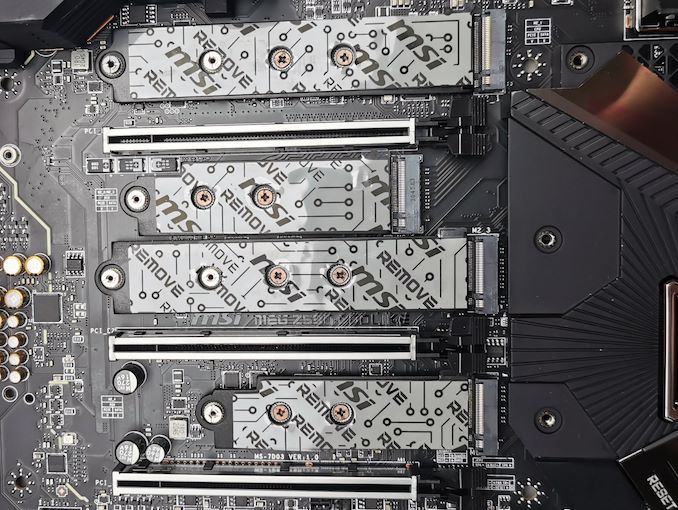 To speak to the PCIe 4.0 support, given that some Z490 motherboards state they are PCIe 4.0 ready. The Z590 based motherboards are essentially built as the main hardware for Rocket Lake with PCIe 4.0, but also support Comet Lake with PCIe 3.0. By contrast, Z490 motherboards are built with Comet Lake as the primary use, and a nod to Rocket Lake - PCIe 4.0 use on Z490 will vary, and it will depend on how future proof each vendor wanted to make those boards despite the fact that they wouldn't have been able to test when the boards we re being designed. MSI didn't put too much emphasis on future PCIe 4.0 support on its Z490 models, unlike a couple of other vendors.

The MEG Z590 Godlike supports PCIe 4.0, with the board's upper two full-length slots operating at PCIe 4.0 x16 and x8/x8. There is a third full-length PCIe slot, but this is electronically locked down to PCIe 3.0 x4 through the chipset. Storage capabilities include four M.2 slots, with one operating at PCIe 4.0 x4, and the others supporting PCIe 3.0 x4 and SATA drives. All four M.2 slots are located underneath M.2 heatsinks, which are designed to fit in with the board's overall design. Located in the bottom right-hand corner are six SATA ports, with support for RAID 0, 1, 5, and 10.

MSI updates its Dynamic II OLED Dashboard on the Z590 Godlike to blend in more with its surroundings. It feels more integrated than the OLED panel on the Z490 Godlike, as the Z590 has it built into a glossy rectangular panel, which gives off a mirror finish when not powered on.

The rear panel of the MSI MEG Z590 Godlike includes dual Thunderbolt 4 Type-C with two mini-DisplayPorts inputs for video capabilities, with one DisplayPort 1.4 video output. In regards to USB, it includes two USB 3.2 G2 Type-A and six USB 3.2 G1 Type-A ports, which is more than enough to cover most user's needs. It uses a similar networking array to the Z490 Godlike, albeit with an overall more premium solution - the Z590 has Intel's latest AX210 Wi-Fi 6E CNVi offering access to the 6 GHz band and includes support for BT 5.2 devices. Both boards have the same Aquantia AQC107 10 GbE controller, but the Z590 opts for Intel's I225-V 2.5 GbE over a Realtek solution . For audio, the Z590 Godlike is using the new Realtek ALC4082 codec, whereas the Z490 has the previous generation flagship ALC1220. We're still waiting on information as to what the exact changes to the new ALC4082 are.

Below is a comparison between the MSI MEG Z590 Godlike specifications and the previous generations Z490 Godlike.

We did intend to show off the power delivery on the Z590 Godlike, but after speaking to MSI, they informed us that the qualification sample they had sent us was an older revision - the one coming to the market would be a direct 20+0 phase design.

Aside from official support for PCIe 4.0, MSI has updated the features in-line with the latest technologies from within the industry. This includes Intel's latest AX210 Wi-Fi 6E CNVi, which is designed to benefit from the 6 GHz band. MSI's latest Z590 Godlike is set to use a direct 20-phase design versus the previous Z490 Godlike's 16-phase design. Another update on the Z590 Godlike, like other Thunderbolt capable Z590 models, is the inclusion of Intel's Maple Ridge JHL8540 Thunderbolt 4 controller.

Based on looks, features, and design, the MSI MEG Z590 Godlike is certainly an attractive version of the Godlike, with much to like. As it stands, MSI intends to sell the Z590 Godlike for $1019, which is a sharp increase of 35% over the MSRP price of the Z490 Godlike at $750.

We intend to do a full review of the MSI MEG Z590 Godlike with an updated sample when Intel launches its Rocket Lake processors.