Alongside every launch of AMD’s consumer processors, the commercial offerings for business come along a few months after. Today we see the commercial launch of the Ryzen 5000 Mobile series, named Ryzen Pro 5000 Mobile. These are built on the same Cezanne processor design, but with the added sprinkling of Pro level features required by commercial customers for widescale deployment, security, and stability. Alongside the increased performance from the previous generation, these new parts include the security updates in Zen 3 such as Shadow Stacks, Pro-level features such as DASH, and guaranteed silicon and imaging support.

The new Ryzen Pro 5000 Mobile processors are all 15 W components, with up to eight cores, sixteen threads, and boost clocks up to 4.4 GHz. As with the non-Pro counterparts, these are using the latest updates to AMD’s Vega design enabling higher frequencies through design co-optimization with TSMC.

While the hardware underneath is similar, AMD’s marketing messages around its commercial product offering cater to a more business oriented crowd. Metrics such as maintaining productivity, keeping focus, allowing for remote work and collaboration, combined with performance, power efficiency, security, and scalability, all enter into that ecosystem. 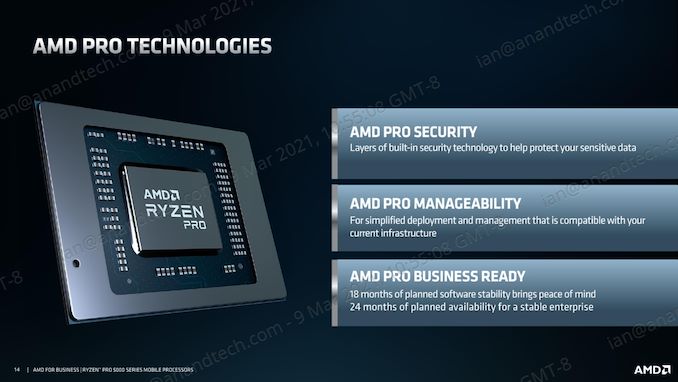 To that end, AMD is promoting it is expecting 63 commercial platform designs with its new processors, enabling 3x growth since the 2018 product portfolio. AMD believes this new generation, at 15 W, performs favourably to Intel’s 28 W quad-core Tiger Lake offering, roughly on par in single threaded performance but from 23% to 65% higher performance in multi-threaded workloads. Separately to this, AMD is also promoting +1.5 hours of battery life compared to Ryzen Pro 4000 Mobile.

The move from Zen 2 to Zen 3 is the biggest uplift, offering +19% more performance through a new core design enabling higher throughput as well as cache changes. For Ryzen Pro 5000 Mobile, there is double the cache, from 8 MB to 16 MB, but also it is a unified cache, allowing all eight cores to access all 16 MB. This enables an effectively lower latency in that memory banding, which is also coupled with an improved memory controller offering double the memory support (up to 64 GB DDR4-3200, up to 32 GB LPDDR4X-4266). The memory controller also supports lower power operation for better battery life. 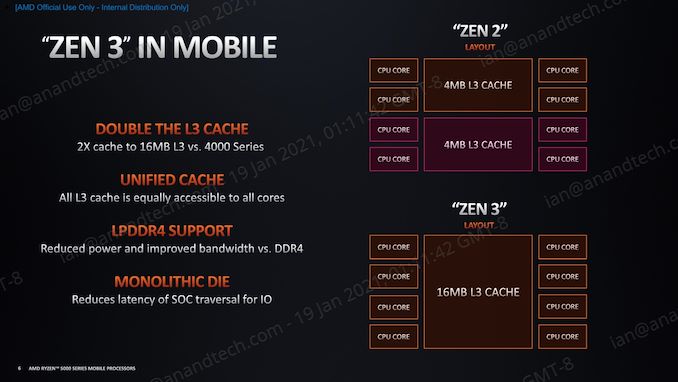 Also on the angle of battery life, the new processor design now allows for per-core voltage through tighter on-chip power regulation. This allows all eight cores and the graphics to operate at independent voltages and frequencies, allowing the processor to optimize where the power needs to be for a given workload, and reduce power during idle times. This is coupled with an upgraded power and response automation, allowing for the most efficient cores to be used for light tasks, faster performance bursts in response-limited scenarios, and more precise voltage/frequency control for the processor.

For the graphics, while it is still Vega 8 graphics, the design has been optimized for a higher graphics frequency. Coupled with the memory controller updates, AMD is promoting better graphics performance and acceleration in typical commercial workloads that can take advantage of this. 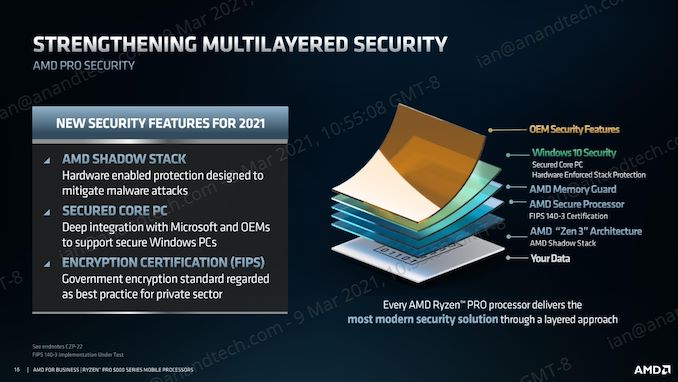 Security updates are of note in the new processors, with AMD implementing its control flow enforcement technology for protection against stack return and jump attacks – you may see this advertised as AMD’s Shadow Stack technology. AMD’s Pro security stack also enables the integrated security processor for a secured core PC, also coupled with FIPS encryption certification as a government standard. 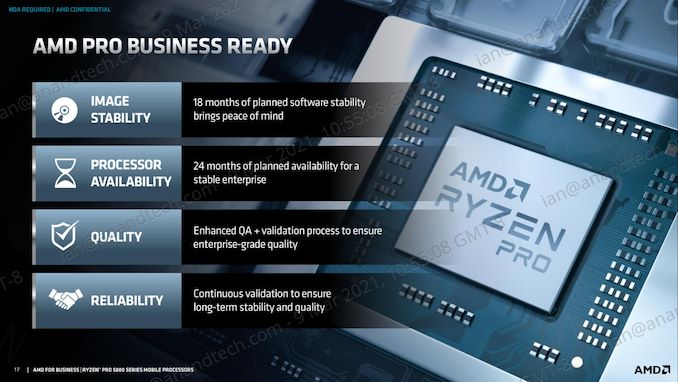 AMD was keen to promote 63 commercial systems coming to market this year with Ryzen Pro, mostly 4000 and 5000 series parts. Six models were given as part of the launch briefing, three each from HP and Lenovo:

Commercial products often take time to come into market, especially with large scale deployments. It will be interesting to see the mix of designs compared with the regular Ryzen 5000 family. 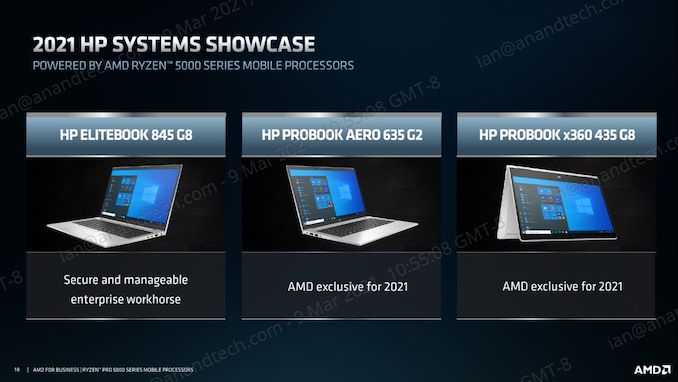 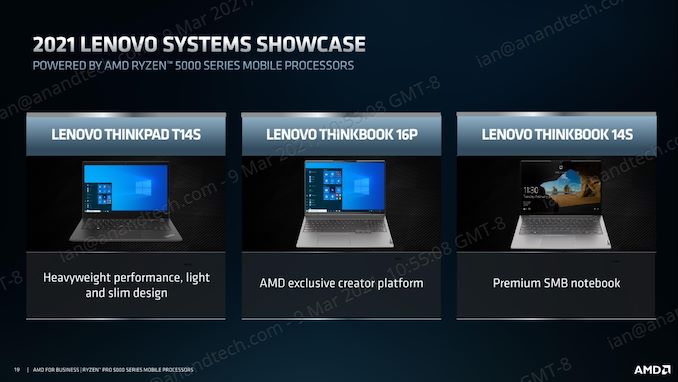