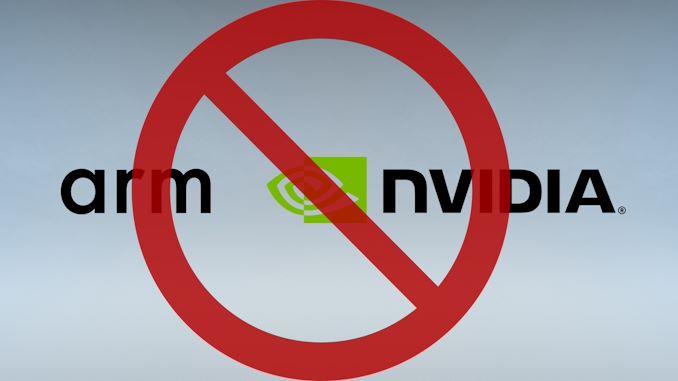 NVIDIA’s year-and-a-half long effort to acquire Arm has come to an end this morning, as NVIDIA and Arm owner SoftBank have announced that the two companies are officially calling off the acquisition. Citing the current lack of regulatory approval of the deal and the multiple investigations that have been opened up into it, NVIDIA and SoftBank are giving up on their acquisition efforts, as the two firms no longer believe it will be possible to receive the necessary regulatory approvals needed to close the deal. In lieu of being able to sell Arm to NVIDIA (or seemingly anyone else), SoftBank is announcing that they will instead be taking Arm public.

First announced back in September of 2020, SoftBank and NVIDIA unveiled what was at the time a $40 billion deal to have NVIDIA acquire the widely popular IP firm. And though the two companies expected some regulatory headwind given the size of the deal and the importance of Arm’s IP to the broader technology ecosystem – Arm’s IP is in many chips in one form or another – SoftBank and NVIDIA still expected to eventually win regulatory approval.

However, after 17 months, it has become increasingly clear that government regulators were not apt to approve the deal. Even with concessions being made by NVIDIA, European Union regulators ended up opening an investigation into the acquisition, Chinese regulators have held off on approving the deal, and US regulators moved to outright block it. Concerns raised by regulators centered around NVIDIA gaining an unfair advantage over other companies who use Arm’s IP, both by controlling the direction of its development and by their position affording NVIDIA unique access to insights about what products Arm customers were developing – some of which would include products being designed to compete with NVIDIA’s own wares. Ultimately, regulators have shown a strong interest in retaining a competitive landscape for chips, with the belief that such a landscape wouldn’t be possible if Arm was owned by a chip designer such as NVIDIA.

As a result of these regulatory hurdles, NVIDIA and SoftBank have formally called off the acquisition, and the situation between the two companies is effectively returning to status quo. According to NVIDIA, the company will be retaining its 20 year Arm license, which will allow the company to continue developing and selling chips based around Arm IP and the Arm CPU architecture. Meanwhile SoftBank has received a $1.25 billion breakup fee from NVIDIA as a contractual consequence of the acquisition not going through.

In lieu of selling Arm to NVIDIA, SoftBank is now going to be preparing to take Arm public. According to the investment group, they are intending to IPO the company by the end of their next fiscal year, which ends on March 23rd of 2023 – essentially giving SoftBank a bit over a year to get the IPO organized. Meanwhile, according to Reuters, SoftBank’s CEO Masayoshi Son has indicated that the IPO will take place in the United States, most likely on the Nasdaq.

Once that IPO is completed, it will mark the second time that Arm has been a public company. Arm was a publicly-held company prior to the SoftBank acquisition in 2016, when SoftBank purchased the company for roughly $32 billion. And while it’s still too early to tell what Arm will be valued at a second time around, it goes without saying that SoftBank would like to turn a profit on the deal, which is why NVIDIA’s $40 billion offer was so enticing. Still, even with the popularity and ubiquity of Arm’s IP across the technology ecosystem, it’s not clear at this time whether SoftBank will be able to get something close to what they spent on Arm, in which case the investment firm is likely to end up taking a loss on the Arm acquisition.

Finally, the cancellation of the acquisition is also bringing some important changes to Arm itself. Simon Segars, Arm’s long-time CEO and major proponent of the acquisition, has stepped down from his position effective immediately. In his place, the Arm board of directors has already met and appointed Arm insider Rene Haas to the CEO position. Haas has been with Arm since 2013, and he has been president of the Arm IP Products Group since 2017.

Arm’s news release doesn’t offer any official insight into why Arm is changing CEOs at such a pivotal time. But with the collapse of the acquisition, Arm and SoftBank may be looking for a different kind of leader to take the company public over the next year.