Although many users are currently looking for smaller power supplies below 500W, there still is a demand for stronger ones, particularly if you are a gamer with Triple-SLI or Quad-Crossfire systems. Those planning on running NVIDIA's next generation "Fermi" will want a fairly beefy PSU, and the same goes for Folding@Home farms where you'd want a lot of stable power. For the upper end PSUs there are a wide range of models, which doesn’t make the purchase decision easy. In addition, these power supplies are usually expensive so you'll want to get the best features and a reliable power supply that can operate even under maximum load and summer temperatures. 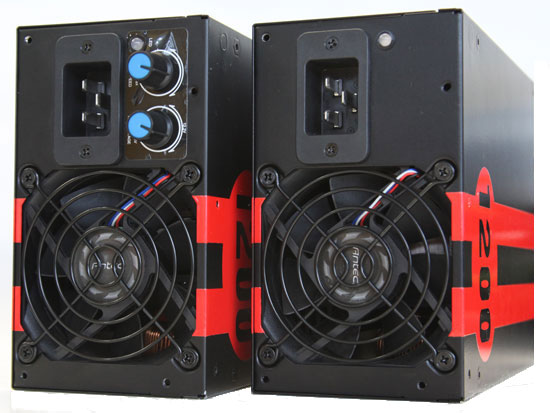 We received a TruePower Quattro 1200W from Antec and as usually we're looking to see if it provides a good overall package. We'll check out the safety features, voltage stability, and the available connectors. Efficiency is also an important issue and affects the energy consumption as well as the internal temperature. We also got a special OC version from Antec. It has two big regulators for the internal fan and +12V voltages. You can easily adjust the rail when the voltage drops down too much. In all other areas the OC version has the same features as the standard model.

The TruePower Quattro 1200W is a PSU that polarizes because of its 80mm fan. Usually a bigger fan also has a bigger cooling area, but lot of it depends on the fan-quality and cooling topology. With a 120-140mm fan mounted on the bottom, you have a curve in the airflow, but with 80mm the airflow is more direct. So temperatures should not be a problem. But will the fan be silent enough for most discerning buyers? Let’s find out!

The product is well packed and includes four screws, the modular connector cables, a short information sheet as well as a power cord. 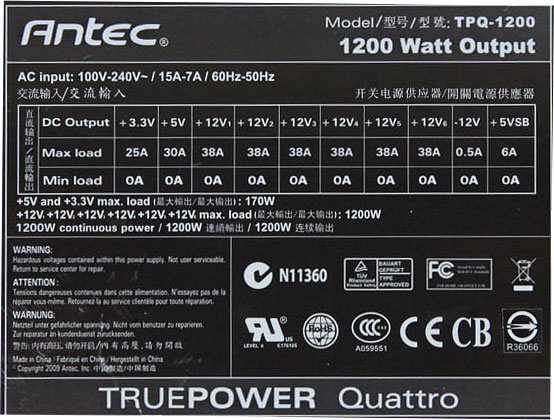 Six well dimensioned +12V rails with 38A each can deliver the full power of the PSU. Again, we can see a manufacturer using a DC-DC converter. +5V has 30A and +3.3V offers 25A. Together they can handle 170W. The massive standby rail is rated at 6A.