As video cards have grown in complexity and power consumption, so has their size. What started with small cards compared of bare chips has grown in to the modern dual-slot megacard that we’ve seen today. And it doesn’t stop there.

Within the last year in particular, manufacturers have been toying with the concept of the triple-slot card. This has come both with cards that are informally intended to use a 3rd slot such as the toasty GeForce GTX 480 (where NVIDIA highly recommends leaving the adjoining slot empty) to cards that formally take up a 3rd slot to afford bigger heatsinks and fans. With more space for cooling gear, manufactures can push more powerful cards than before thanks to the extra cooling afforded by this gear.

We have a few different triple-slot cards in-house that we’re going to be looking at over the next few weeks. But to kick things off, we decided to start small, looking at an interesting product from PowerColor that takes the triple-slot concept and attaches it to the normally cooler Raden HD 5770: PowerColor’s Radeon HD 5770 PCS+ Vortex . 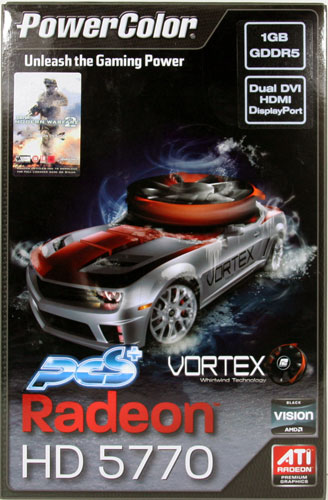 The Vortex is a factory-overclocked 1GB Radeon HD 5770. Compared to the stock clocked 5770, PowerColor gives it a bit of a nudge by increasing the 5770’s core clock from 850MHz to 900Mhz and the memory clock from 1.2GHz (4.8GHz data rate) to 1.225Ghz (4.9GHz data rate), for a 5% core overclock and 2% memory overclock. This gives the card a small but measurable performance lead over its stock-clocked predecessors. 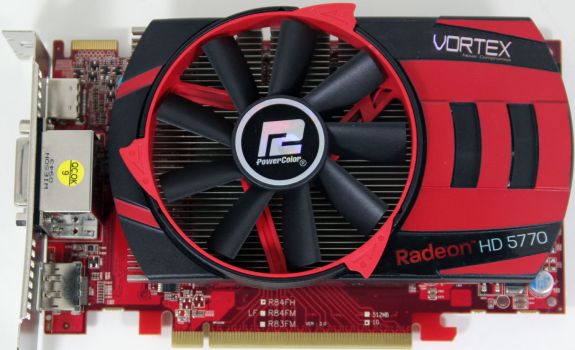 But by far the most interesting difference with this card is the cooler. By default, the Vortex uses a fairly standard fan-over-heatsink double-slot cooler. A 92mm fan sits on top of an aluminum heatsink with a copper baseplate, with a partial plastic shroud directing airflow out of the front and the rear of the card. The twist (and there’s literally a twist involved) is that the 92mm fan is adjustable – by twisting it, it can be raised roughly 9mm, in effect turning the cooler on the card in to a triple-slot cooler.

Specifically the fan sits inside a red plastic shim that can be twisted to make the shim and the enclosed fan protrude. With the shim lowered the fan sits virtually right on top of the heatsink, while when raised the shim brings the fan farther above the heatsink while pulling double-duty by keeping the airflow directly focused on the same spot on the heatsink. PowerColor’s rationale for this design is that raising the fan reduces backpressure caused by the heatsink, which should improve the cooling capabilities of the card.

In the case of the Vortex, by using an adjustable-height fan the card can work as a double-slot card while being convertible for use in computers which can afford the 3rd slot. This adds some complexity to the card – “my fan broke” can take on a whole new meaning – but it also allows PowerColor to toy with a triple-slot design without dedicating themselves to it and driving away buyers who can’t fit a triple-slot card. However this also means that they aren’t realizing the full benefits of a triple-slot design, as they can’t use an outright larger heatsink or fan in the card’s construction.

The big question of course is whether this convertible design has any real-world benefit, and the answer is kind-of, sort-of, not-really. We’ll get to a full breakdown of the cooler’s performance in our Power, Temperature & Noise section of the review, but we’ll say right now that adjusting the fan doesn’t have a significant impact on any of its attributes – it performs near-consistently with both the fan lowered and raised. Ultimately the card doesn’t stop acting like a dual-slot card. 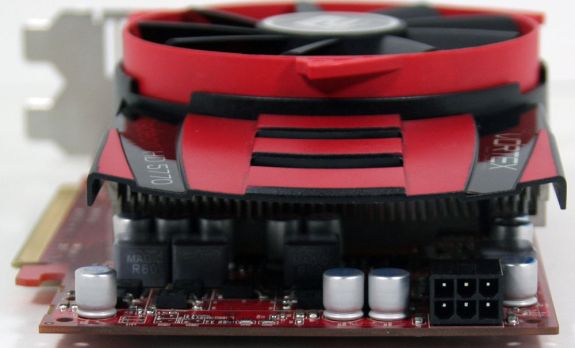 Moving on, the card itself it notably smaller than the AMD reference design. PowerColor has managed to pack an overclocked Radeon HD 5770 in to a PCB the same length as the more concise Radeon HD 5750, with the card only extending 7.15” versus the reference 5770’s 8.25”.

As for the port configuration, the Vortex uses AMD’s standard 2x DVI, 1x HDMI, 1x DP Eyefinity port configuration with a slight twist. The ports have been rearranged so that rather than the pair of DVI ports being at the bottom of the card, they’re at the center of the card with the HDMI port above and the DP port below. At first glance this seems counterproductive to cooling since it results in the DVI ports more directly blocking the card’s airflow, but as this is a card that vents from both the front and the back this is not a critical difference.

Rounding out the package is the usual collection of parts, adaptors and manuals: a DVI->VGA dongle, a short CrossFire bridge, a driver CD, and a generic multilingual quick installation guide. PowerColor is also including a separate 1 page manual for the Vortex, detailing how to raise/lower/remove the fan.

Finally, PowerColor is also including a free game with the card: Call of Duty – Modern Warfare 2. MW2 still separately sells at its full MSRP, so if you don’t already have the game this will help take the sting out of the Vortex’s own above-average MSRP. Which on that note, the Vortex is currently selling for around $165, putting it around $20-$25 more expensive than the average 1GB 5770.