Today we're looking at some of the most expensive ATX power supplies on the market. All of these PSUs deliver more than enough power for SLI and CrossFire systems, and the highest wattage units are capable of running tri-SLI with GTX 480. Even so, there are still plenty of differences between the offerings. We'll find out which handle overload situations the best, who has the highest efficiency, and which PSU provides the best voltage regulation. Based on all of the criteria, we'll try to separate the wheat from the tares and pick out the best choice overall; we might end up with a split decision, however, so let's start by meeting the contenders. 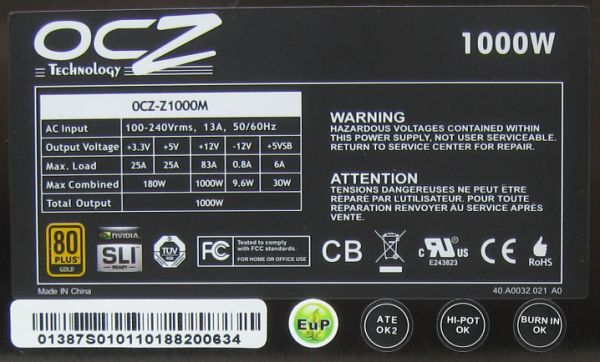 Our first candiate comes from OCZ and is one of the oldest 80Plus Gold power supplies on the market. The OCZ Z1000M is the 1000W model from their Z-series; it comes EuP-Ready (which means low power loss during standby mode) and is available for $205 online. In contrast to the Z1000, this model includes modular cables like most high-end power supplies, and you get an SLI-Ready certificate. A powerful single-rail +12V rated at 83A indicates that this PSU uses a DC-to-DC converter (like most other high-end PSUs these days), so the smaller rails are fed by +12V.

The next 1000W PSU comes from AeroCool with a lesser 80Plus Bronze certification. To compensate the "low" efficiency AeroCool catches our eyes with blue 140mm LED-fans, a lighted panel for cable management, and "Carbon Fiber" finishing. The AeroCool V12XT-1000 1000W is not available in the United States, but you can get it for €165 in Germany (about $230).

Cougar is a newcomer and the retail-brand of HEC, who has a long OEM history. Cougar is using HEC's best build options and robust cases for their power supplies. The Cougar GX G1050 1050W can be bought in Europe, with a few models also showing up in the USA. In Europe you've to pay €190 (a rather expensive $265) to get this beautiful PSU. Is it a good high efficiency option, with another 80Plus Gold certificate? We'll find out. 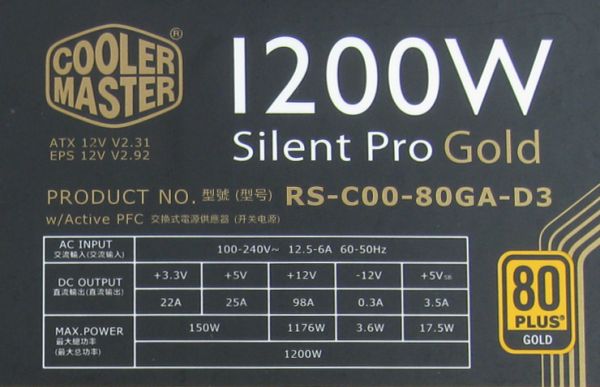 Besides the three 1000W PSUs, we also have two 1200W models for this roundup. The first is the Cooler Master Silent Pro Gold 1200W. Yet another 80Plus Gold PSU - notice a trend? - can it meet the specs and live up to its "silent" name? Most PSUs above 1000W need powerful cooling at high load, so any suggestion of silence seems like pie in the sky. Regardless of the noise levels, we'll test this Cooler Master to see how the single +12V rail rated at nearly 100A stands up to the competition. Pricing is only slighly higher than other 1000W PSUs, checking in at $210. 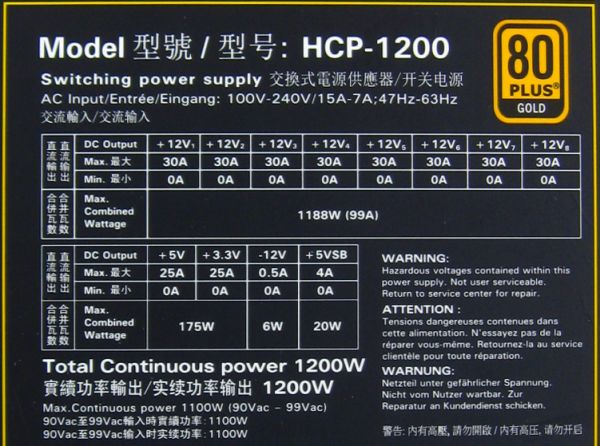 Our final entrant in today's roundup comes from Antec, a familiar name to most computer enthusiasts. Their latests creations is the Antec High Current Pro HCP-1200. Priced at $300 online, it's the most expensive PSU in our list and it once again boasts an 80Plus Gold certification. Unlike most of the other PSUs, the HPC-1200 has eight +12V rails, but it also uses DC-to-DC conversion and Japanese capacitors (almost a requirement to high 80Plus Gold). An unusual features is the 80mm fan for cooling, rather than the typical 120mm or 140mm fans we see elsewhere. Antec has created a new design with two PCBs to increase airflow and allow for optimal use of the 80mm fan. We'll see if this works well, or if it simply result in higher noise levels but similar temperatures and efficiency.