It wouldn’t be a trade show without a little bit of extreme thinking, to grab some headlines and show the punters how creative their engineers are.  As part of our Computex coverage, we’ve seen all manner of graphics cards – at the high end of the spectrum, we’re seeing custom AMD and NVIDIA cards that supposedly push 600 watts!

From ASUS, building on the ‘halo’ of the ROG Mars, the Republic of Gamers branded Mars II is being shown – a dual GPU featuring two 580s on one PCB in a triple slot format.  There’s no mention of clock speeds, but we’ve been told that it’s due in July with a limited run of 1000 units. (ed: this is the same quantity as the Matrix 5870X2) 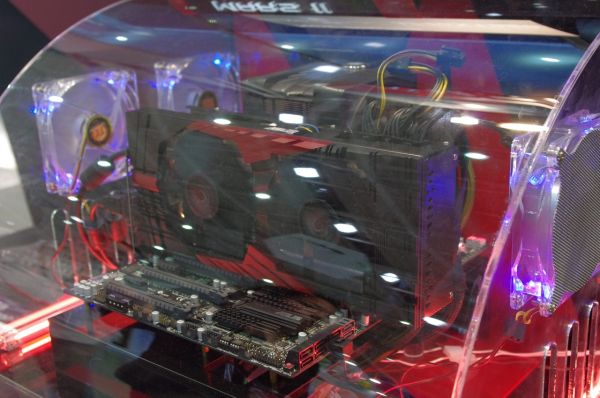 Featuring a DirectCool heatsink arrangement, ASUS are claiming a 25% speed increase over a GTX 590.  As you can imagine, this product will run loud and hot, and there is an air of ‘why?’ hanging in the air – the only vaguely reasonable answer I can give you is for overclocking records.  The 600W maximum power consumption figure comes from the three 8-pin PCIe connectors each potentially pulling 150W, along with the PCIe supplying 150W.  If you end up getting one, just make sure your PSU can handle it.

From Powercolor, we’re seeing a technological showcase with what they call the 6970X2, bringing the X2 name back into the scene (unofficially).  This PCB uses a Lucid Hydra chip (rather than a PLX) for routing to combine two full-speed 6970 chips powered by the three 8-pin PCIe to give that magical 600W number. 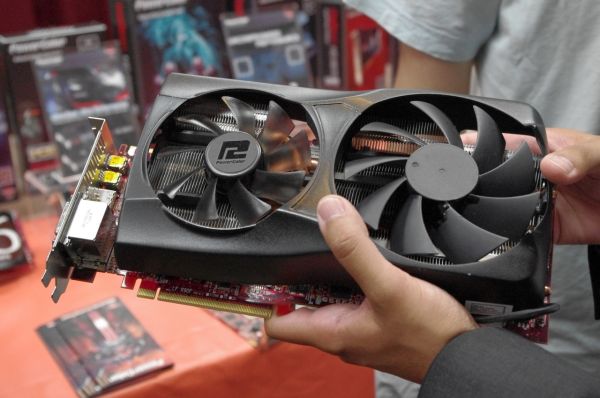 They had a pair of these cards in Crossfire into a system for us to look at, even though with CPU and everything else, there was only a 1200W Gold PSU powering it all, possibly suggesting that the power consumption is below 600W, and performance is only a few percentage points higher performance than the 6990, if any. 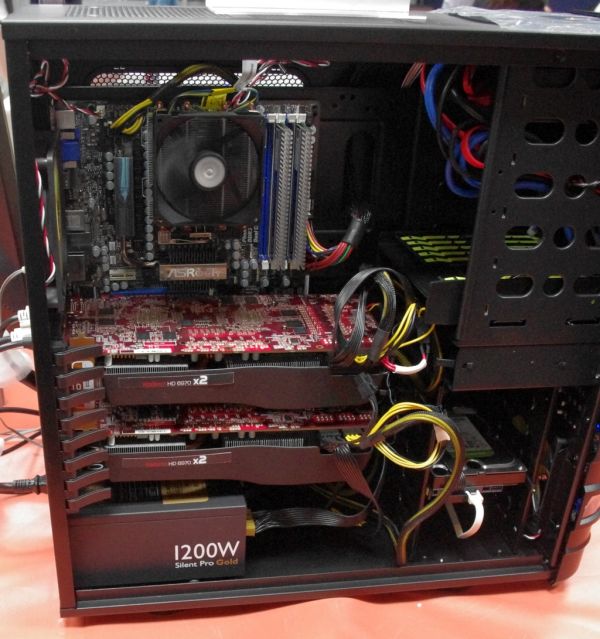 We were told that Powercolor don’t have intentions to bring this product to market unless they see a demand for it – they were more inclined to show off a 6950X2 which should enter into the market between the 6970 and 6990 in terms of performance.  No word on pricing or release, though.