Smartphones are fast becoming the personal convergence device, replacing the digital cameras and camcorders as well as the portable PMPs (personal media players). However, there is another aspect to the convergence paradigm being played out at the residential level. Today's connected home has multiple devices for various purposes. For example, I have a modem and a wireless router to make sure that all my devices can connect to the Internet. I have also been through umpteen boxes bringing media from online streaming services as well as my NAS to the TV. Home control and automation systems (helping with energy management, home monitoring etc.) are also installed by service providers and commercial integrators. Wouldn't it be nice to have a single device to manage all these aspects? The icing on the cake would be if such a device were to be easily installed by the consumers themselves (saving money in the process for the service providers like AT&T, Comcast and Verizon).

Today, Sigma Designs is launching [PDF] Skini, a reference platform for products aimed at changing the way consumers interact with the living room. A thin client with over-the-top (OTT) and cable / telco connectivity in one box, the Skini platform also benefits from being a part of the Z-Wave home control solution. The ease of use of the products based on this platform is supposed to make professional installation unnecessary. 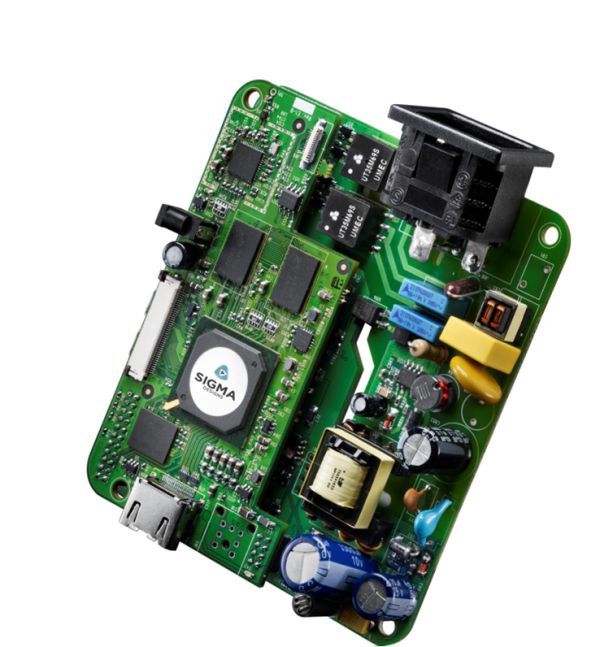 The current crop of Smart TVs may bring the Internet to your living room. Unfortunately, putting OTT services like Netflix directly into a device that has a longer update cycle (consumers don't go out and buy a TV every two years) is not really a good idea. For example, your current TV might probably not support HD audio passthrough back to an AV receiver. It is not implausible that Netflix might be able to stream videos with HD audio in the future. It is beneficial for consumers to just update their WDTV-like box for enjoying the new feature, rather than buy a new TV. This makes the television a bad candidate for the home convergence device.

A set top box (not the traditional ones only, but includes media streamers too), on the other hand, has a much shorter update cycle. It makes definite sense for this to be the convergence device. Now, let us take a look at what Sigma Designs has put in Skini towards this:

This is the heart of the STB. Using a decoder chip targeted towards the IPTV market (the next-gen version of the SMP 8652 chip used in the Dune Lite) lowers the power consumption and BOM cost. For example, this chip requires only 32b DRAM instead of the 64b used in chips like the SMP 8643 / SMP 8655. Readers should note that this is not a decoder chip targeted towards the videophiles (so don't expect Blu-ray capabilities even for ISOs), but more towards OTT applications like Netflix. Sigma is undoubtedly one of the leading decoder SoC manufacturers for connected set top boxes, and we have no doubt that the appropriate SoC has been chosen for this platform.

This enables Skini's networking capabilities. The platform doesn't need to be equipped with an Ethernet port or a Wifi solution because it can grab content from the network using this section. Conforming to the 200 Mbps HomePlug AV standards, the CG2110 is a product from Sigma's CopperGate acquisition. With ClearPath technology (which I had covered here earlier), this product looks pretty capable. However, my main source of worry is that I am yet to spot this chip in any retail shipping powerline networking product. Sigma Designs indicated that products based on the chip are not in the retail market, but only being shipped to service providers. I am trying to find out more information about who they are.

Z-Wave is the defacto standard for wireless RF communication within the home. With the integration of Z-Wave technology, the Skini becomes another part of the connected home. Due to its RF nature, any product based on Skini can be easily hidden behind the display, and yet be remote controlled. In addition, becoming a part of the Z-Wave mesh network also enables it to control other connected devices.

The Skini platform looks to be a good first step towards making convergence in a residential setting realistic and affordable. However, the networking gateway aspect remains incomplete as yet. Consumers using devices based on Skini still need a router / modem to connect their network to the outside world. Residential gateways based on G.hn silicon can interface with either coax (cable) or phone lines (DSL) to connect to the service providers' networks. We will have to wait for Sigma's G.hn products to mature before the next convergence step is taken.

All the technologies involved in Skini seem to be based on market proven technologies. Only the powerline networking segment continues to remain an unknown entity outside the Sigma Designs labs. ODMs picking up the Skini platform can be expected to launch products in the market around a year or so from now.

UPDATE: The official press release is linked here [PDF]. We were given to understand during the briefing last week that the reference platform would be named 'Skini'. However, the PR today doesn't have any special tag for it. We are letting our news piece stand as-is.