The basic building block of Bulldozer is the dual-core module, pictured below. AMD wanted better performance than simple SMT (ala Hyper Threading) would allow but without resorting to full duplication of resources we get in a traditional dual core CPU. The result is a duplication of integer execution resources and L1 caches, but a sharing of the front end and FPU. AMD still refers to this module as being dual-core, although it's a departure from the more traditional definition of the word. In the early days of multi-core x86 processors, dual-core designs were simply two single core processors stuck on the same package. Today we still see simple duplication of identical cores in a single processor, but moving forward it's likely that we'll see more heterogenous multi-core systems. AMD's Bulldozer architecture may be unusual, but it challenges the conventional definition of a core in a way that we're probably going to face one way or another in the not too distant future.

The bigger issue with Bulldozer isn't one of core semantics, but rather how threads get scheduled on those cores. Ideally, threads with shared data sets would get scheduled on the same module, while threads that share no data would be scheduled on separate modules. The former allows more efficient use of a module's L2 cache, while the latter guarantees each thread has access to all of a module's resources when there's no tangible benefit to sharing. 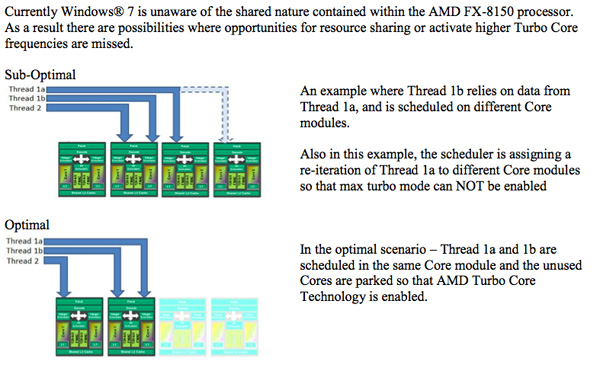 This ideal scenario isn't how threads are scheduled on Bulldozer today. Instead of intelligent core/module scheduling based on the memory addresses touched by a thread, Windows 7 currently just schedules threads on Bulldozer in order. Starting from core 0 and going up to core 7 in an eight-core FX-8150, Windows 7 will schedule two threads on the first module, then move to the next module, etc... If the threads happen to be working on the same data, then Windows 7's scheduling approach makes sense. If the threads scheduled are working on different data sets however, Windows 7's current treatment of Bulldozer is suboptimal.

AMD and Microsoft have been working on a patch to Windows 7 that improves scheduling behavior on Bulldozer. The result are two hotfixes that should both be installed on Bulldozer systems. Both hotfixes require Windows 7 SP1, they will refuse to install on a pre-SP1 installation.

The first update simply tells Windows 7 to schedule all threads on empty modules first, then on shared cores. The second hotfix increases Windows 7's core parking latency if there are threads that need scheduling. There's a performance penalty you pay to sleep/wake a module, so if there are threads waiting to be scheduled they'll have a better chance to be scheduled on an unused module after this update.

Note that neither hotfix enables the most optimal scheduling on Bulldozer. Rather than being thread aware and scheduling dependent threads on the same module and independent threads across separate modules, the updates simply move to a better default cause of scheduling on modules first. This should improve performance in most cases but there's a chance that some workloads will see a performance reduction. AMD tells me that it's still working with OS vendors (read: Microsoft) to better optimize for Bulldozer. If I had to guess I'd say that we may see the next big step forward with Windows 8.

AMD was pretty honest when it described the performance gains FX owners can expect to see from this update. In its own blog post on the topic AMD tells users to expect a 1 - 2% gain on average across most applications. Without any big promises I wasn't expecting the Bulldozer vs. Sandy Bridge standings to change post-update, but I wanted to run some tests just to be sure.