AMD Athlon 4 - The Palomino is Here 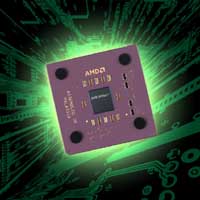 Although they may not be the largest x86 processor manufacturer on the block, they are definitely the favorite of quite a few in the enthusiast community these days. Their recent burst in popularity is not without merit. The launch of the Athlon microprocessor close to two years ago has truly brought desktop performance to new levels. It is clear that the Pentium III architecture is an aging one, so the Athlon's original competitor is now on its way out of the picture. What AMD does have to worry about is the Athlon's latest bully, the Pentium 4.

AMD isn't one to rest on their laurels however and with that in mind they have already scheduled three replacement cores for the Thunderbird. The core being announced today is one of the most highly talked about improvements to the Athlon core ever since the Thunderbird was released in June of last year. This of course is the Palomino core which is found in the latest release of the Athlon processor that AMD is calling the Athlon 4.

However our most astute readers will know very well why AMD chose to call the Palomino the Athlon 4. Intel has spent millions of dollars on their Pentium 4 marketing campaign, marking this as their largest processor ramp in history. By the end of 2001 Intel expects the Pentium 4 to completely push out the Pentium III in the markets and in order to do so they must create quite a bit of brand recognition. AMD is obviously using the name Athlon 4 to build off of Intel's aggressive marketing. It is much like what they did with the K6-III processor. Originally the K6-X series of processors used regular numbers after the name to denote the processor series, for example the original K6 was just called the K6 and the second generation part was called the K6-2. Before the third generation K6 launched Intel called their latest processor at the time the Pentium III, so AMD went ahead and called their third generation K6 processor the K6-III.

The reasoning behind calling the Palomino the Athlon 4 is completely marketing. We can go into the reasons why they should've or why they shouldn't have done so but honestly it doesn't matter when it comes down to performance. You all are smart enough not to fall for marketing gimmicks so there's no point in drawing this discussion out any further. AMD decided to call the Palomino the Athlon 4, case closed.

What is the Athlon 4?
Tweet
PRINT THIS ARTICLE
Comments Locked