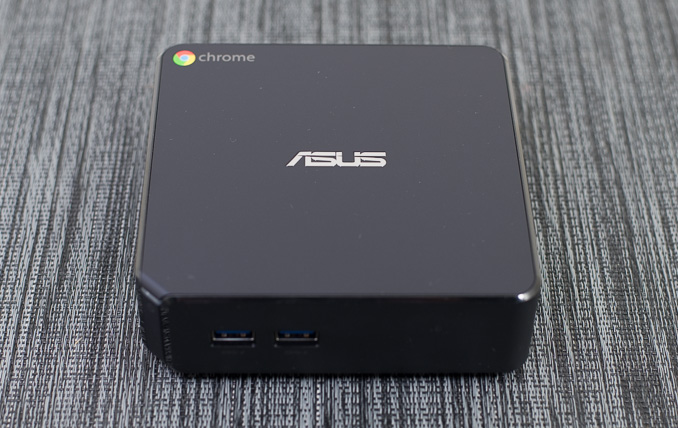 I see a lot of potential in Google’s Chrome OS. Even today, I have no issues recommending the platform to friends and family with basic computing needs but who want something more traditional than a smartphone or tablet.

Once you get beyond its somewhat awkward learning curve (e.g. there is no traditional Office, you can’t run most of what you download from the web/email attachments, etc...), it’s an OS that is incredibly easy to support if you’re the appointed IT-person in your family/friend group. Sandboxing and automatic updates keep the platform secure. The inability to run most things outside of a web browser keeps clueless users from getting themselves into trouble by running things they shouldn’t. Then there’s the fact that many devices running Chrome OS tend to deliver better user experiences, at least as far as browsing is concerned, compared to similarly priced entry level Windows PCs. HP’s Chromebook 11 is a great example of what can be done. Although HP fumbled its SoC choice, the display, keyboard, storage and chassis in the Chromebook 11 were expertly chosen. For basic web use, I’ve found myself recommending Chromebooks over traditional notebooks more often than not.

I don’t appear to be an outlier in my recommending Chromebooks. Amazon’s top two best selling notebooks are both Chromebooks, and Google’s presence on that list is nothing new. The big question is whether or not the same success at the entry level of the notebook market can apply to desktops running Chrome OS. To find out Google partnered up with a number of OEMs, including ASUS, to go after the entry level Windows desktop market. 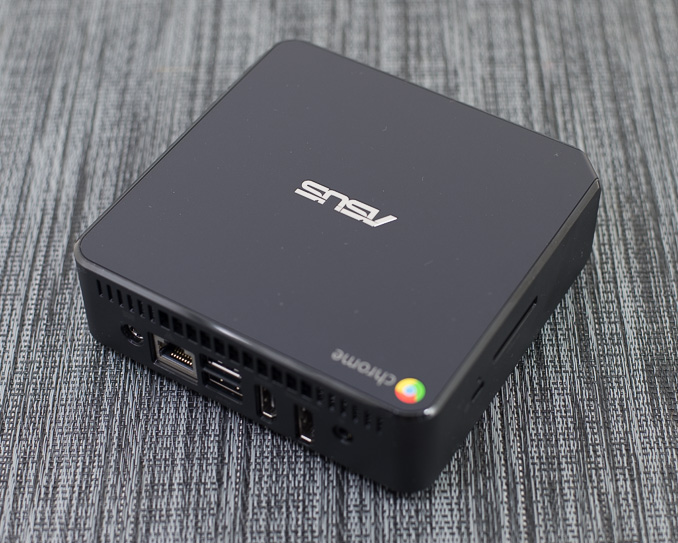 ASUS’ first desktop Chrome OS device is simply called the Chromebox. From a distance it looks like a somewhat larger Intel NUC. The low profile, square form factor has become the shape of choice for bringing Ultrabook CPUs to desktops. ASUS’ take on the design is matte plastic on all faces, with a glossy plastic trim around the top. There’s a single white LED above the power button on the unit. Google’s Chrome logo and brand integrate nicely on the top of the box. Google appears to be learning from the mistakes of its predecessors - logos are ok, as long as they don’t clutter up the design.

More expensive materials would be nice but for $179, I’m not complaining. In a world where small dimensions usually come at a premium, ASUS and Google continue the Chrome OS trend of delivering a better than expected experience at a given price point.

The Chromebox has four USB 3.0 ports. Two are located on the front, and two more around back. On the back side there’s also a Gigabit Ethernet port, DisplayPort and HDMI outputs as well as a 1/8" audio out. 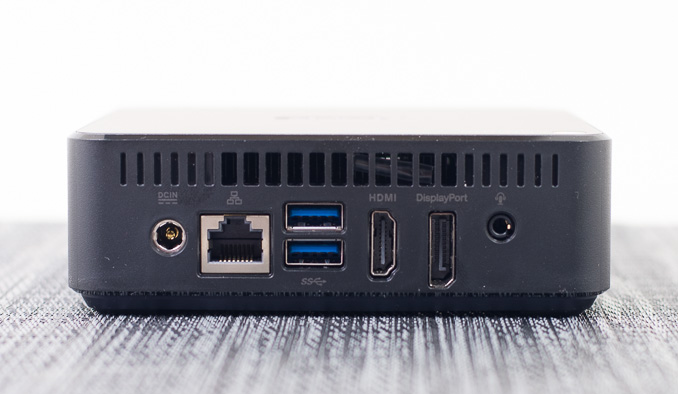 There’s an SD card reader on the left side of the unit, along with a Kensington security slot. The recovery switch is just above the security slot. To enter recovery mode use a pin or paperclip to keep the switch pressed down while powering up the unit. Hit CTRL+D to boot into dev mode once at the recovery screen.

Despite ASUS’ initial claims that its Chromebox would be fanless, there is a single fan inside the machine. Air is brought in through the bottom and vented through the back of the chassis. Fan noise is minimal, and it is entirely possible to run the machine without the fan spinning up but open up enough tabs and you’ll find the fan humming away all the time. My review unit was a development unit, which ASUS claims was a bit louder than final retail units will be. Given the low performance requirements of Chrome OS and the low thermal footprint of the Haswell based Celeron inside, noise isn’t an issue with the ASUS Chromebox. 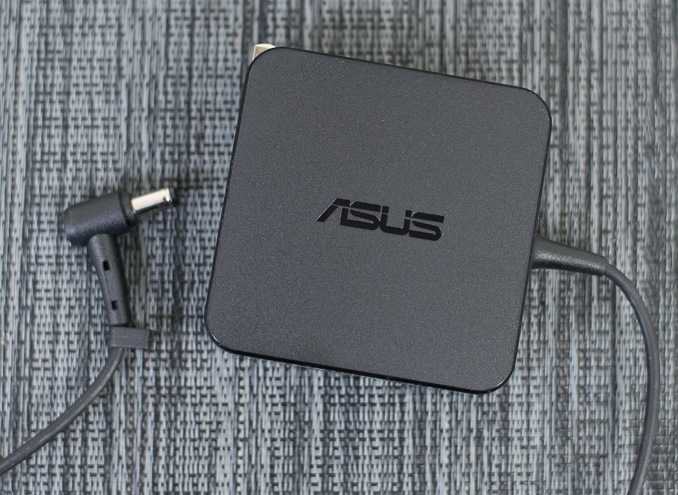 As with anything this size, the power supply is external. In this case ASUS uses an AC adapter that looks a lot like what you get with one of its Ultrabooks. The external power supply can deliver up to 65W, although I never saw power consumption above 15W.

The Chromebox will be available in three different configurations. Each configuration is a fully functional PC with DRAM, storage and WiFi already configured. Chrome OS comes preloaded on all systems.

The Core i3 model ships with an ASUS Chromebox wireless keyboard and mouse (available for $50 separately). The Core i7 model, which isn't available in the US, features a remote control with QWERTY keyboard, external speaker and 1080p webcam.

The $179 configuration is clearly the sweet spot for ASUS’ Chromebox. While the Core i3 model does increase memory capacity and improves performance, unless you have a real need for 4K video out the savings offered by the entry level Celeron model are hard to beat.

One of the biggest problems with entry level PCs is they ship with a mechanical hard drive rather than solid state storage. The result is very high latency IO and a user experience that can be substantially worse than using a smartphone or tablet when it comes to launching apps. Many Chrome OS devices instead opt for shipping higher performance eMMC solutions or low end SSDs; ASUS’ Chromebox is no exception. All ASUS Chromebox models ship with a 16GB SanDisk U110 M.2 (SATA) SSD. ASUS isn’t multi-sourcing the drives, this should be the only thing you find if you crack open one of the boxes. 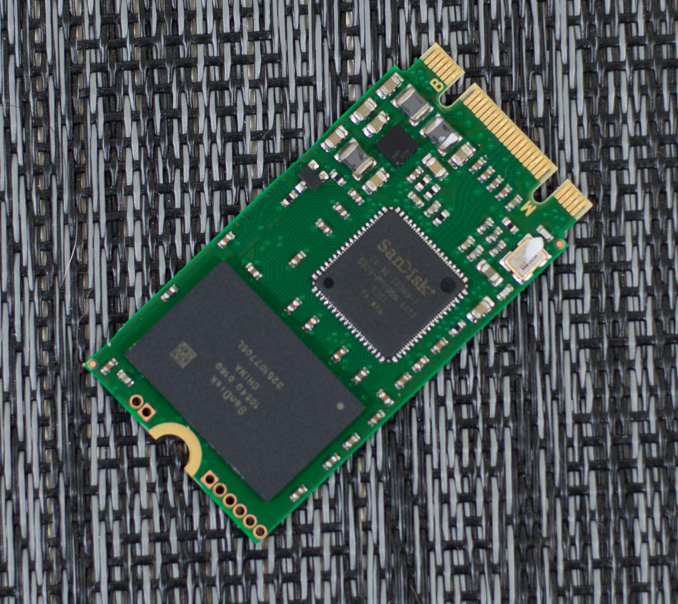 We’ve seen the U110 before. I’ve seen it in a lot of the early Ultrabooks as well as caching solutions in other notebooks. The drive features a SATA interface and a 22mm x 42mm M.2 form factor. The architecture is pretty simple. We’re not talking about the high-end stuff from SanDisk here but a more traditional looking SSD without any external DRAM cache. For a full blown Windows PC I’d argue that the U110 isn’t enough, but for a Chromebox where the primary use case is reading and writing to the browser’s cache it’s totally fine. I didn’t try torturing the drive, but TRIM is supported by the U110. 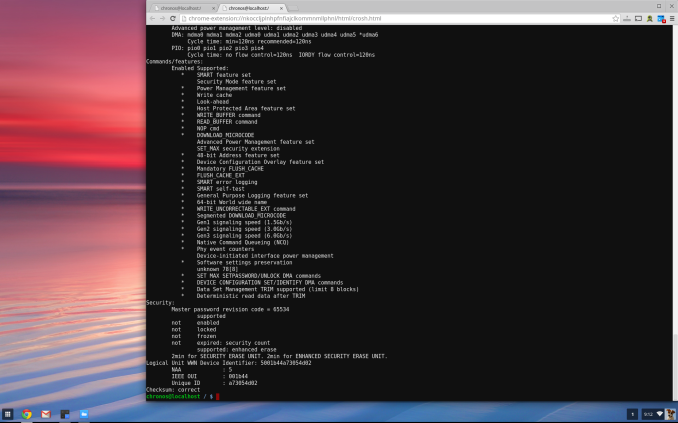 The Chromebox ships with an SD card reader and four USB 3.0 ports so you can obviously get media onto the device, there’s just not much space to store it. Also keep in mind that as with (almost) all SSDs you’ll want to keep a substantial amount of free space on the drive to avoid ruining the user experience. In the case of the U110 you have around 12GB free by default, and I wouldn’t drop below 3GB - 4GB free on the drive.

Given the small size of the internal SSD, I don’t expect we’ll see a lot of users pulling large files off of the drive. As there’s no support for network share access under Chrome OS, if you want to play an offline video you’ll have to either stream it off an attached USB/SD card or copy it locally from external storage. Although the Chromebox features four USB 3.0 ports, I measured max sequential write speed at around 42MB/s (copying from a USB 3.0 Patriot Supersonic Magnum SSD). I suspect we’re limited by the write speed to the single NAND device (likely two NAND die) on the U110.

All Chromebox owners receive 100GB of free Google Drive space for 2 years - an attempt to offset the limited local storage. 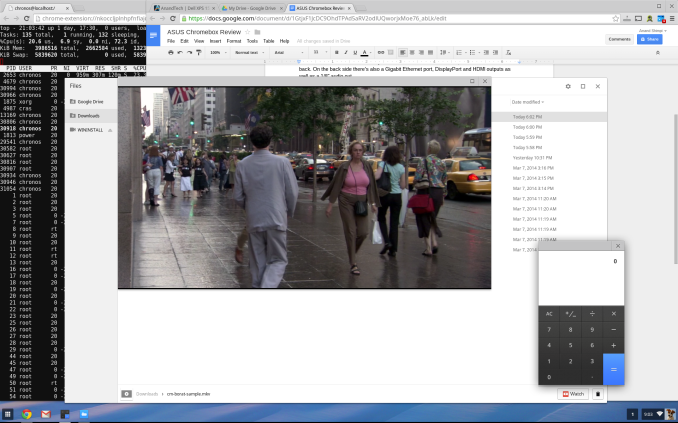 ASUS shipped me the $179 system upgraded with two 2GB DDR3-1600 SO-DIMMs (4GB total up from the 2GB base). For light usage I didn’t see DRAM usage exceed 2GB, however when I really started heavy multitasking with the machine I can see 2GB being a bit of a limit. I’m pretty confident that the $179 configuration will make for a good system as is, however it likely wouldn’t hurt to buy another 2GB SO-DIMM ($20 - $25).

Inside the ASUS Chromebox

Like the NUC, it's pretty easy to get inside the Chromebox. Peel off the four rubber feet underneath the box to reveal the four Phillips head screws. Remove the screws and use one of the screw holes to provide leverage to pop the bottom off and you're in. 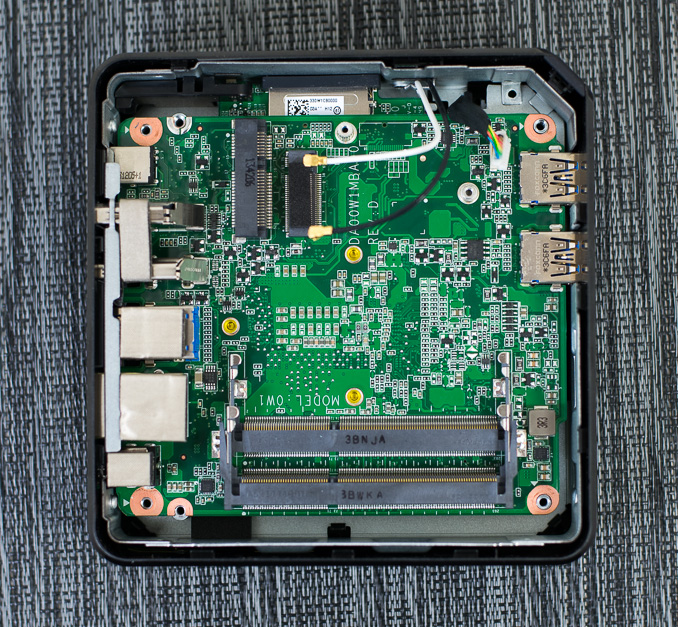 There are no real surprises on the inside. The Chromebox features two DDR3 SO-DIMM slots, an M.2 SATA port and a mini-PCIe both of which come populated from the factory.