It becomes increasingly more difficult to compete when what you’re up against is cheaper, faster and being touted by most of the press as the only solution that makes sense.  On the flip side of the coin, things can get pretty tough when your chief competitor has the marketing muscle, dollars and trust in their brand name to convince over 70% of the market that they are still the right choice.

This is the predicament that both AMD and Intel happen to find themselves in.  They each have a different set of issues to deal with and in a sense, are both fighting an uphill battle for control in the x86 microprocessor space.

AMD’s solution is one that has been promising since it’s introduction.  The Athlon processor not only outperforms everything Intel can offer in almost all situations, but the Athlon is also selling for extremely low prices.  The flagship Athlon 1.4GHz processor can be found for under $180 while Intel’s Pentium 4 1.7GHz processor will set you back over $300.  The only problem AMD has really had with acceptance of their Athlon processor is platform reliability and it appears as if NVIDIA may be the one to solve that issue very soon.

The Pentium 4 processor has been Intel’s answer to the very successful Athlon.  Although capable to run at very high clock speeds, the processor’s NetBurst architecture has not even been slightly tapped by currently available clock frequencies.  The unfortunate result of this is that the real world performance of today’s Pentium 4 systems is below that of what AMD can offer.  When you combine lower performance with a higher price, you can easily see why AMD has picked up a lot of market share recently.

On the right track

In the conclusion of our first Pentium 4 review from last year we stated that two requirements must be fulfilled in order for the Pentium 4 to succeed.  Although we’ve made these two points time and time again, they bear repeating today:

1)      The clock speed of the Pentium 4 must ramp up significantly higher than what it is at today; and
2)      Software optimizations for the Pentium 4’s NetBurst architecture must be present in commonly used applications and games.

Intel is definitely trying their hardest to come through on both of those points, there are some barriers in their way.  Currently the Pentium 4’s 42 million transistors can be found on a 217 mm^2 die manufactured on a 0.18-micron process. 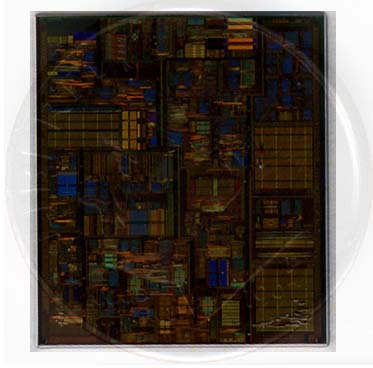 The watermark behind the Pentium 4 die is a US dime just to give you an idea of how big the core is.

The problem with a die this large is that it is quite costly to produce.  Not only that but the larger your die size, the greater the chance is for a defect to occur at the manufacturing stage that would render the die useless.  There honestly isn’t much that can be done about this right now.  Intel does have some of the most advanced manufacturing facilities on the planet so their Pentium 4 yields should be as high as possible, but that doesn’t mean that they aren’t still governed by the same laws of manufacturing that all semiconductor companies must deal with.

Help is on the way, as Intel will be making a transition to a 0.13-micron process which should cut the Pentium 4’s die size in half.  While this alone will decrease manufacturing costs and increase yields, we believe that Intel will use some of the die savings to increase the L2 cache size of the processor to 512KB which will improve performance somewhat.

There isn’t much more Intel can do about improving software optimizations that they already haven’t done.  Intel’s compilers are readily available and can offer relatively impressive performance enhancements for current code on Pentium 4 platforms.

We know what Intel has to do in order to remain competitive, and you better believe that Intel does as well.  They have some other tricks up their sleeves that will be revealed next year but for now there’s not much that they can do other than to stick to their processor release schedule and milk the most out of their 0.18-micron process.

Today Intel turns the clock speed knob up another notch with their release of the first 1.8GHz Pentium 4 processor.  Priced at $562 in 1,000 unit quantities to distributors, the decision between a Pentium 4 1.8GHz and an Athlon 1.4GHz processor priced at $174 isn’t a very difficult one from a cost standpoint; but what about performance?  At 1.7GHz three months ago, the Pentium 4 was starting to get competitive with the Athlon, does another 100MHz really mean that much more?