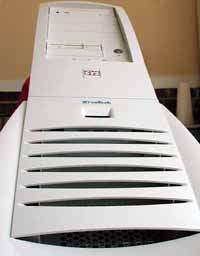 Kryotech.  That’s a name we haven’t heard from in a while.  And there are very unfortunate reasons for that.  Just over a year ago, Rob DiGiacomo, Executive Vice President and one of the original founders of Kryotech introduced the world’s first 1GHz Athlon system, dubbed the Kryotech SuperG.  A very young and healthy individual, Rob embodied much of the passion Kryotech had at the time.  The dream was simple; to bring supercooling more mainstream, eventually to fit the power of the original Kryotech units into a space no larger than a 5.25” drive bay.  Sadly, it was during that week of the initial presentation of the Kryotech SuperG system that Rob DiGiacomo passed away leaving his family and Kryotech behind.

After the SuperG and Rob’s unfortunate passing, Kryotech had remained relatively quiet.  While there were projects being worked on behind the scenes, very little made it to the public’s eye.  In spite of the team’s greatest efforts, Kryotech has seemingly always been just one or two steps behind.  Both the Cool K6-2 line and SuperG Kryotech solutions shared one thing in common; although they could offer clock rates largely unattainable upon their release, the performance improvements they offered almost never justified the incredible cost of the system.

Case in point would be the Kryotech SuperG; just four months after its release there were already air-cooled Athlon 900s on the market and the extra 11% increase in clock speed the SuperG at 1GHz offered would almost never be worth the insane cost of ownership which was often double that of a equivalently configured Athlon 900 system.

This time around Kryotech is in a bit of a different situation.  The Athlon is the desired processor by many; all motherboard and compatibility issues have been sorted out and the platform is highly competitive with solutions from Intel.  At the same time, the Athlon is no longer constrained by external limitations.  With a faster front side bus and memory bus, the Athlon is better suited for high clock speed operation; and unlike the original Athlons, todays Athlons are not clock limited by their L2 cache because it is on-die.

Today’s solution from Kryotech has the potential to be a bit more attractive than what we’ve seen in the past, provided that the Athlon can indeed scale well with higher clock speeds.  By the end of this year AMD is claiming to have a 1.73GHz Athlon 4 available for the desktop market, and Intel will have a 2.2GHz Northwood based Pentium 4; but today, Kryotech is offering a 1.866GHz Athlon based SuperG2.  Running at a cool -40C.