While the first 3D NAND chips have just found their way to the market and most NAND manufacturers are still developing their designs, there are already a handful of next generation memory technologies in development that are slated to supersede NAND in the next decade or so. One of the most promising technologies is Resistive Random Access Memory, which is more commonly referred to as Resistive RAM or just RRAM. Similar to NAND, RRAM is non-volatile, meaning that it will retain data without power unlike regular DRAM, which needs a continuous power source. Multiple companies are developing RRAM including semiconductor giants like Samsung and SanDisk, but Crossbar, a US based startup, has probably the most advanced design so far.

I've been following Crossbar for quite some time, but I haven't written anything about the company until now. The company was founded in 2010, headquarters in Santa Clara, California and has secured over $50 million in funding. The company's roots come from the University of Michigan and its Chief Scientist and co-founder, Prof. Wei Lu, is currently an associate professor at the university. The Crossbar team consists of 40-45 members at this point, of which most have extensive backgrounds in semiconductor research and development. 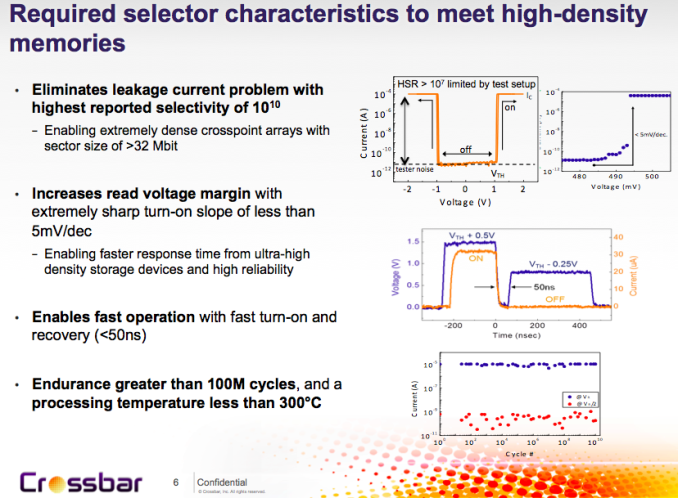 The big benefits RRAM have over NAND are performance and endurance. NAND read latencies are typically in the order of hundreds of microseconds, whereas Crossbar claims latency of as low as 50 nanoseconds for its RRAM design. Endurance in turn can be millions of program/erase cycles, although for the early designs Crossbar is aiming at more conservative ~100K cycles. 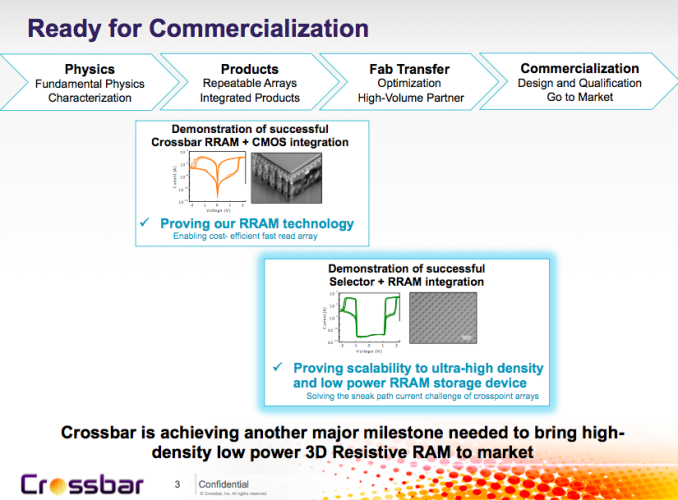 Last week at IEDM Crossbar announced that it is now entering the commercialization stage. In other words, it has already shown a working silicon and it has also proved that the design can be transferred to commercial fab for high volume manufacturing, so the company is now working with the fabs to build final products.

At first Crossbar is aiming at the embedded market and is licensing its technology to ASIC, FPGA and SoC developers with first samples arriving in early 2015, and mass production scheduled for late 2015 or early 2016. Aside from licensing, Crossbar is also developing standalone chips with higher capacity and density, which should enter the market about a year after the embedded RRAM designs (i.e.most likely sometime in 2017).

The beauty of RRAM is that it can be manufactured using a regular CMOS process with only a few modifications. NAND and especially 3D NAND require expensive special tools (for things like high aspect ratio etching), which is why only a handful of companies are making 3D NAND. RRAM in turn can be manufactured by practically any existing fab with very little added cost, which ultimately results in lower prices due to more competition.

Additionally, RRAM doesn't share NAND's lithography issues. As we know, the sole reason why 3D NAND was invented is because planar NAND can't really scale below 15nm without serious endurance and performance considerations. However, RRAM can efficiently scale to 4-5nm without any issues and in fact Crossbar has already demonstrated an 8nm chip that it built in its R&D labs (most likely using multiple patterning). Moreover, RRAM can be stacked vertically to create a 3D crosspoint array for increased density and so far Crossbar is at three layers, but first commercial standalone chips are expected to feature 16 layers and up to 1Tbit capacity.

Obviously, there are still several hurdles to cross before RRAM is ready to challenge NAND, but it's good to hear that there has been significant progress in development and the technology has gained interest from the fab companies. Faster, more durable and cheaper SSDs and other storage devices are a win for everyone and ultimately even 3D NAND is just an interim solution until something better comes around, which may very well be RRAM. I'll be doing a more in-depth article about RRAM technology in the coming months as this article was more of a heads up about the state of RRAM and Crosspoint's recent developments, so stay tuned for a deeper analysis!