One of the companies I visited is a company that's perhaps a bit less well known in the US, be quiet! (I joked with the representatives that they should change their name to "Shut Up!", but that probably won't happen.) Headquartered in Germany, be quiet! focuses on creating silent or at least low noise components for PCs, with a range of power supplies, CPU coolers, fans, and now cases. We've reviewed a few of their power supplies over the past couple of years, and most have performed well – though they were not necessarily "silent" during testing at high loads. Most of the products on display in their suite have been available for at least several months or more, so I'll confine my comments to the three new products being shown. 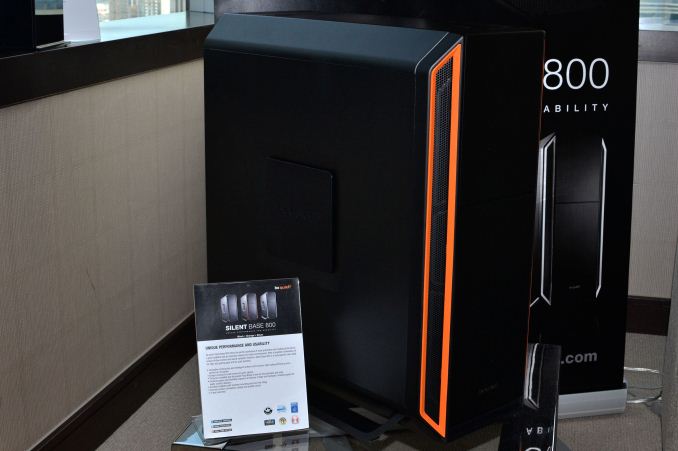 Starting with what is perhaps the most interesting of their new releases, the Silent Base 800 is be quiet!'s first PC case. It's a full-size ATX tower case, measuring 266mm x 559mm x 495mm (W x H x D) – 230mm x 542mm x 495mm without the stand. Keeping components cool without generating a lot of noise is often easier to do with a larger case, so it's not too surprising that be quiet! went with a larger chassis. The design is clean and generally conservative in appearance, though the case is available with three accent colors – black (no accents, really), silver, or orange. MSRP is $139, and you can find the orange and silver cases on Newegg right now. be quiet! also mentioned that they're trying to get more of their products to the US via other outlets (e.g. Amazon), which would certainly help with increasing brand recognition and pricing in the US. 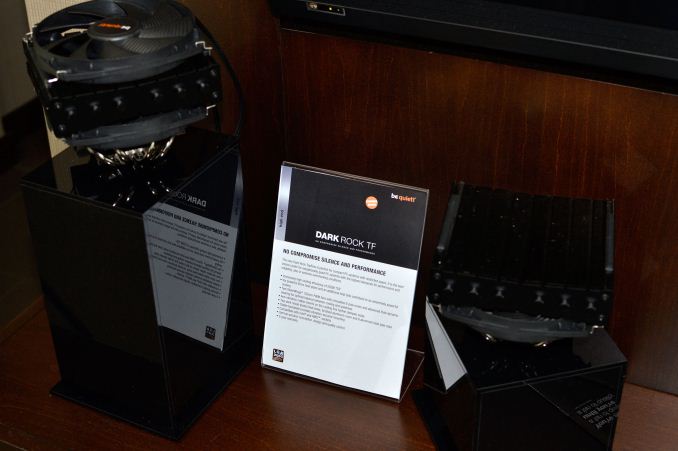 The other new products are both CPU coolers, expanding the already large selection of be quiet! offerings. First is a top-down alternative of an existing cooler, the Dark Rock TF (TF = Top Flow). Of course, being top-down cooling instead of a tower with a side fan changes the appearance quite a bit, so other than name there's not a lot in common between the two. The Dark Rock TF has six heat pipes, two 135mm SilentWings fans with fluid dynamic bearings, and it's rated to cool up to 220W TDP, which means it's enough for all the current CPUs from AMD and Intel. 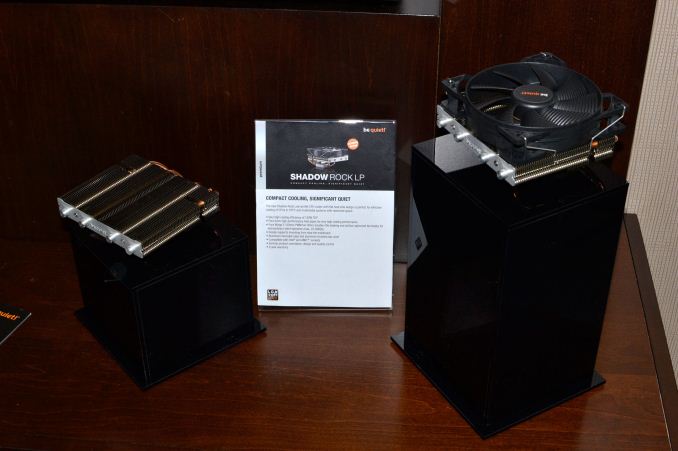 The second CPU cooler is a low profile offering, the Shadow Rock LP. This cooler has four heat pipes, a Pure Wings 2 120mm PWM fan with rifle bearings, and a maximum TDP rating of 130W. It's rated at a maximum of 25.5 dB(A) for noise, making this a great option for a compact and quiet build.

Both the Dark Rock TF and Shadow Rock LP should be available in the near future, but be quiet! was not able to provide pricing at this time. You can view the other products on display in the gallery below.