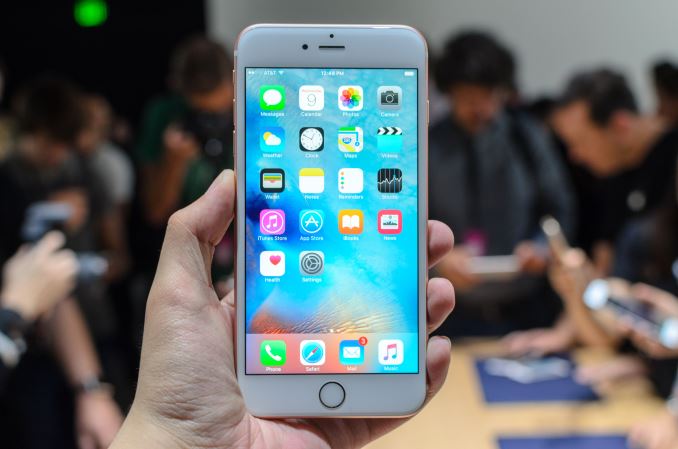 While the iPhone 6s and 6s Plus are relatively the same phone on the surface compared to the iPhone 6 and 6 Plus, in just about half an hour of hands-on time I actually discovered there’s quite a bit different that wasn’t even mentioned in the announcement, in addition to discovering the value of various aspects of what was discussed in the announcement.

The first, and probably most important change to the iPhone 6s from a user experience perspective this generation is going to be 3D Touch. After using it, I’m sure this will be widely adopted throughout the smartphone industry in about 18-24 months after the iPhone 6s. One of the major user experience problems I have with smartphones that isn’t necessarily obvious to most people is that there are a lot of actions that just break the flow of fluid user interaction. This may seem like a petty complaint, but a long press is probably the single most frustrating aspect of a smartphone user experience today. On Android, the standard for a long-press is usually around 500ms. This doesn’t seem like a long time, but if done repeatedly or if under time pressure half a second can start to feel like an eternity.

Another kind of flow-breaking that exists in smartphone user experience today is what I’d call ping-ponging. In short, this is the kind of user interaction in which you’re constantly opening one app to view one small thing before switching back to the application your focus is on. This is actually objectively bad for user focus, because humans are fundamentally not capable of true multitasking. Instead of doing multiple things at the same time, we’re just rapidly switching back and forth between tasks. Each context switch entails overhead, much like how making a CPU core switch processes invokes an overhead as state is saved and loaded. 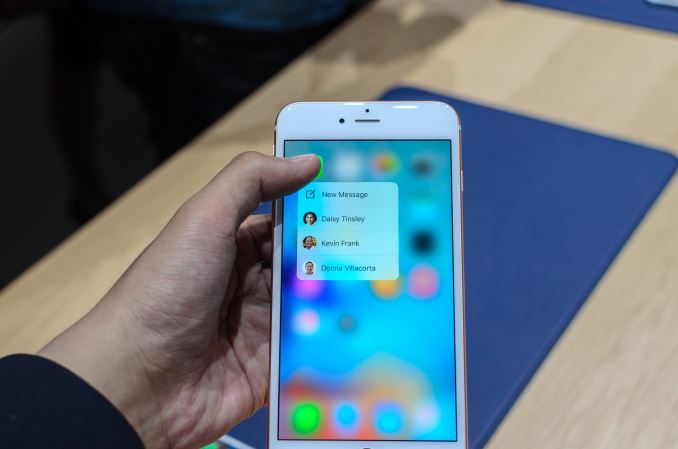 3D Touch is a novel way to tackle these two problems. In practice, 3D Touch means that you can do the equivalent of a long press on various app icons to expose options hidden behind a long press menu. However, instead of a long press, you just push slightly harder on the display to activate it so it happens as fast as you want it to be. The use of the Taptic Engine is actually quite helpful here as well, because it gives very obvious feedback as to what you can do with a force touch. If the app on a homescreen doesn’t support any options with 3D Touch, there’s a distinct double-tap to indicate this instead of a lot of pressing and wondering why nothing is happening. The speed at which you can do a force touch on the display means that 3D Touch gestures are just much faster and more user friendly than a traditional long-press. 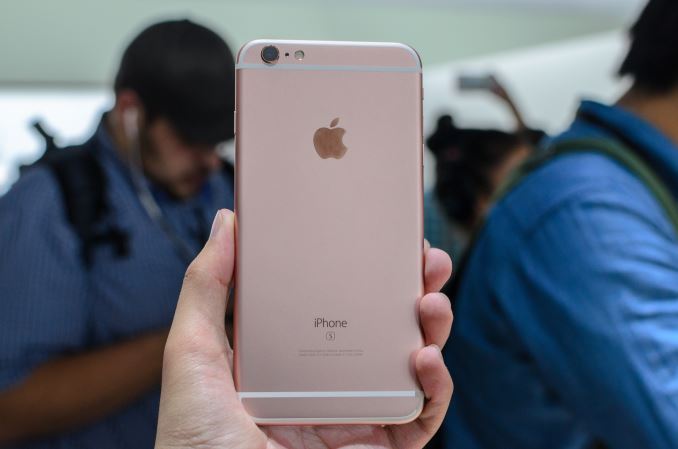 In the other case previously described, 3D Touch is actually impressive because of how well it effectively eliminates a lot of the user experience inefficiencies that come with traditional multi-touch. Some of the key demos shown include peeking at emails with a medium-press, and opening them with a hard-press. In the case of the medium-press, you can look at an email with a single press quickly instead of tapping on the email, quickly reading it, then marking it unread and swiping back to the inbox. A hard-press opens the email completely so it isn’t necessary to release the finger and then do a light tap. In practice, this is actually a fluent gesture to make and I didn’t have any trouble with strange activation pressures. As far as I can tell though the pressure levels aren’t relative, so it’s fully possible to make a force touch equal to a light tap if you’re aggressive enough with the force touch gesture. 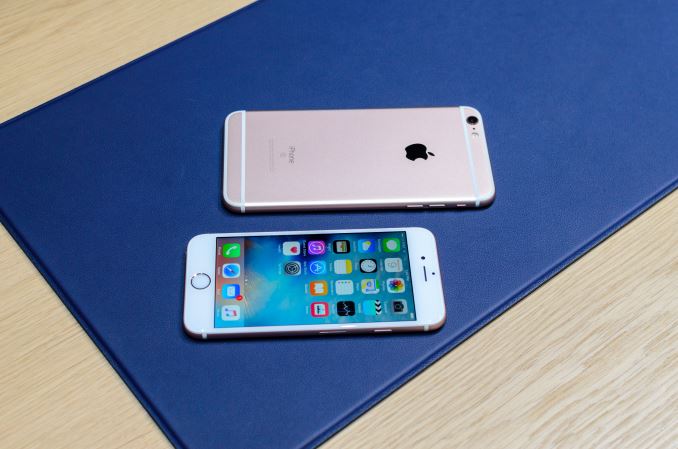 The email example is just one application, but probably one of the more obvious applications of this would be viewing links in a message thread and responding to IM within that thread. Without the ability to peek at links, each link would have to be opened in the browser with the associated loading times and before using multitasking to get back to the messaging application. In that time, it’s also possible that the messaging application would clear the message field so a half-written message could be lost to the ether. With 3D Touch, it’s possible to easily view links and other information in a message thread without losing focus.

It’s also possible to do a fast multitasking gesture by applying pressure while swiping from the left edge of the display, which allows a fast way of accessing the next app in the multitasking menu instead of pressing the home button. Overall, I think this is a pretty smart feature. It isn’t life-changing, but it’s definitely nice to have. 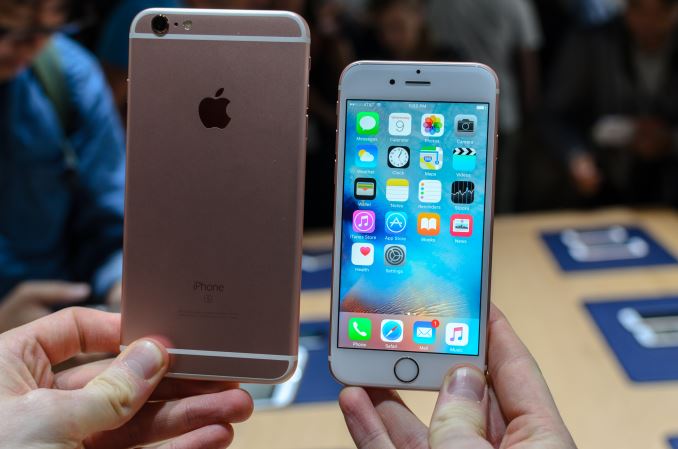 The other features that I could immediately get my impressions on were retina flash and changes to video recording. Retina flash sounds a bit over the top, but it’s really just a good way of using the display as a front-facing LED flash. LG has done this before to be sure, but Apple has implemented it in a way that the display gets much brighter than usual for a very short period of time. At least a few OEMs have implemented front-facing cameras with LED flash, but I have to say in my experience an LED flash with a front-facing camera is a painful experience because the light is strongly concentrated on a single point. I thought LG had a smart idea in the form of using the display as a front-facing LED flash as early as the G Flex 2, and given that Apple has adopted this idea as well it seems that someone at Apple thought so as well. 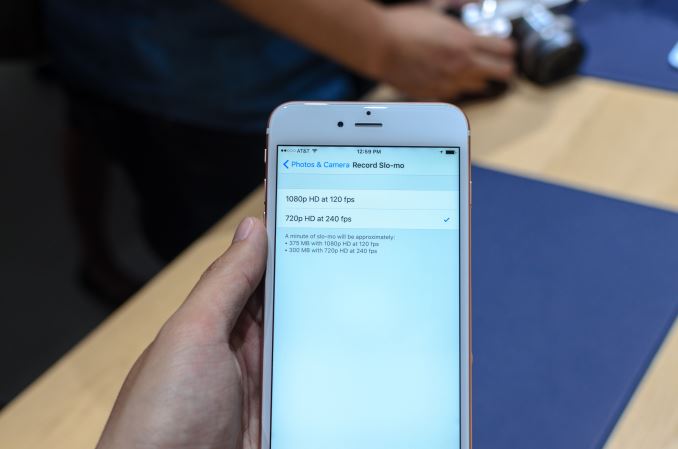 Although there was no way I’d be able to accurately say whether low light performance is comparable between the iPhone 6 and 6s, I did notice some changes to video recordings in the iPhone 6s. The first thing I noticed was that for slow motion video, 1080p120 is definitely supported. Additionally when recording 4K video there’s no time limit like in most phones, which is notable because in most phones the time limit is to ensure that SoC or camera sensor temperatures don’t exceed critical values. Live Photo seems like an interesting feature, but I really don't know what to think there as the functionality could easily go either way depending upon the intelligence there.

Outside of these small observations, it seems to me that the iPhone 6 Plus’ camera now enables OIS when recording video. When I tried to record video, it’s obvious that some kind of hardware stabilization is happening because the video was smoothed with the characteristic OIS jerkiness that I’ve seen in many phones that only use OIS in video. In my experience, the iPhone 6 while recording video appeared to not have any video stabilization at all while once recorded much of the jitter and shake was removed from the video. I didn’t get to examine the recorded video too closely, but I suspect the electronic video stabilization will help to smooth out the inherent jerkiness of OIS in video alone. 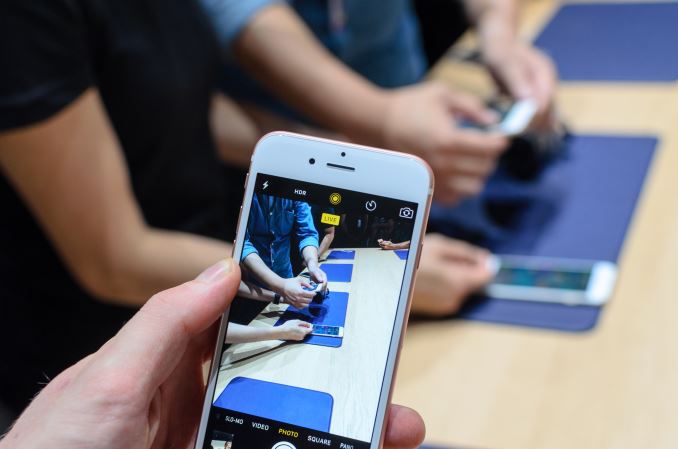 Overall, I found the iPhone 6s lineup to be relatively promising in terms of new features like 3D Touch and performance with nothing that seemed wrong. However, as the smartphone market continues to mature it’s no longer enough to just rely on a short hands-on to identify potential pitfalls. In order to really understand the iPhone 6s lineup and the problems that it might have a full review is necessary.