We touched upon this very briefly in our recent HP Elitebook news, but at the end of September AMD officially launched four new professional mobile APUs under the AMD PRO line.  The PRO line is similar to the commercial line of APUs that end up in the hands of casual users, except they are mostly sold in machines aimed at the professional market, and might have some slightly different arrangements in configuration to ensure a long-tail support program. This typically means that features such as TrustZone (using ARM IP) embedded in the processors go through ISV (independent software vendor) certification to ensure a fully functioning product. 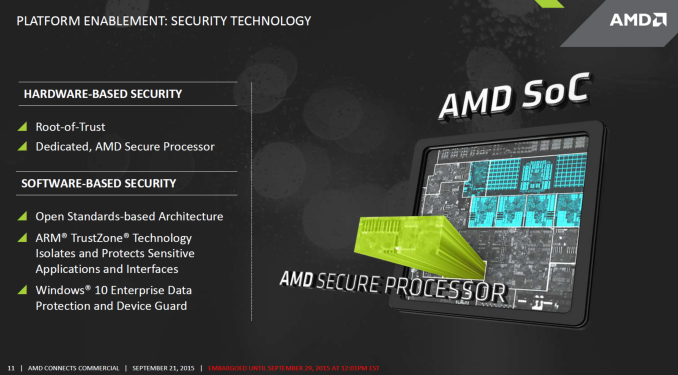 The four AMD PRO processors being released today all use AMD’s latest microarchitecture codenamed Carrizo, which fits comprises of one or two ‘Excavator’ class modules and Radeon Rx graphics. In a change from regular AMD A-Series nomenclature, the top processor of the stack is now an ‘A12’ class design which reaches greater parity with previous microarchitecture designs on the desktop. This means a dual module design paired with eight graphics compute units giving what AMD calls 12 compute cores in total with ‘R7’ graphics. 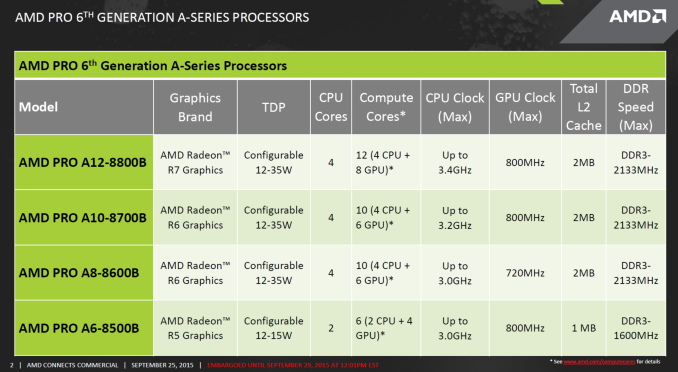 AMD’s Carrizo platform was built focused on the 15W TDP window, although AMD will allow its partners to boost the designs with a configurable TDP up to 35W on the A12, A10 and A8. AMD is also promising an enterprise package with partners to ensure a 36-month extended OEM warranty, 24-month product longevity, 18-month image stability and a ‘richer configuration’ package. That last point is promoted through the use of Qualcomm’s Snapdragon X5 LTE modem (Cat4) in certain HP branded professional notebook designs. 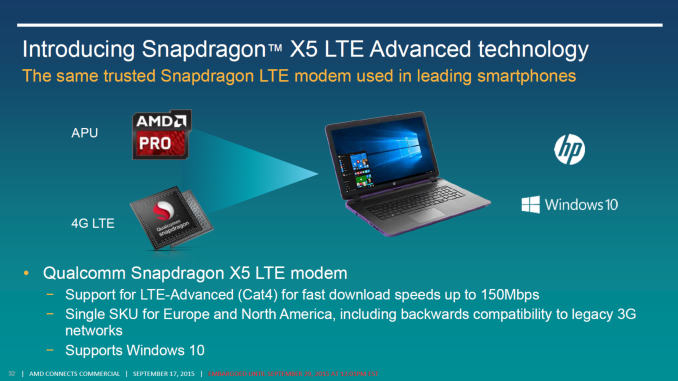 Carrizo’s raison d’être was to bring use cases that required high end laptop configurations down into the mainstream (>$800 into $500-$700), which could be considered important if a business is considering deployment of several hundred devices at once along with a support package to go along with it. The PRO APUs will also support DASH for remote desktop management as well as AMD PRO Control Center for SMBs. 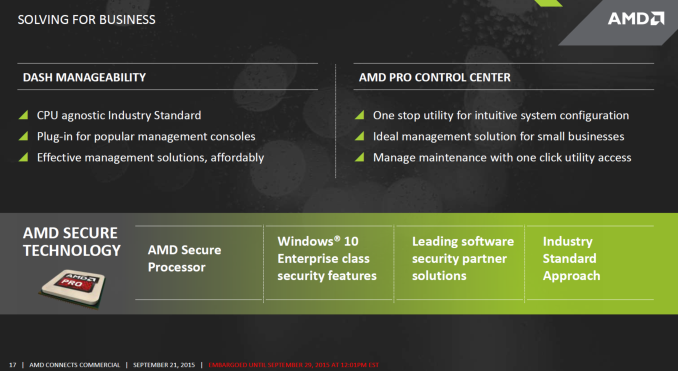 AMD expects a number of partners to release information over the next few months. We are working towards obtaining a suitable Carrizo unit for testing as well.