Despite the recent news surrounding AMDs reorganization and financials, today AMD is announcing the launch of its first DDR4 processors. But rather than aiming at the high end or the consumer platforms like their blue competitors, AMDs focus for DDR4 starts in the embedded sector which comprises of digital signage, vertical markets (medical), networking, point-of-sale, commercial and industrial applications.

The new R-series line uses the same Excavator cores we have seen in AMDs Carrizo platform but with an extra level of validation and support.  An embedded platform regularly requires security, and thus features such as AMDs use of ARM TrustZone along with high performance graphics and HSA 1.0 features are all aimed at these markets. Currently at launch, AMD is submitting the processors for 'HSA 1.0 Full' validation to the HSA Foundation, and expect to be approved within a week or two. 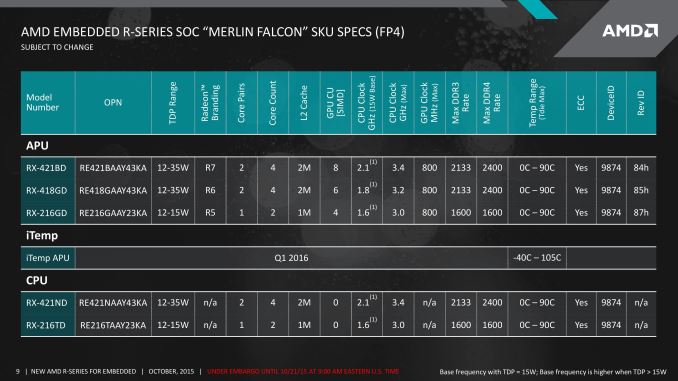 The initial launch will be of five ‘Merlin Falcon’ processors, supporting DDR3 and DDR4 through a dual controller design, with the single module cheaper silicon being limited on memory speeds. Three of these will be APUs with 3rd generation GCN graphics while two are pure CPU silicon. There will be another set of processors coming in Q1 in the R-series as part of the iTemp line, featuring a wider validated temperature operating window from -40ºC to 105ºC. This will essentially the same silicon as the others, but requires additional validation on AMDs side. Customers requiring ISO or MIL validation will have to enquire with AMD direct. 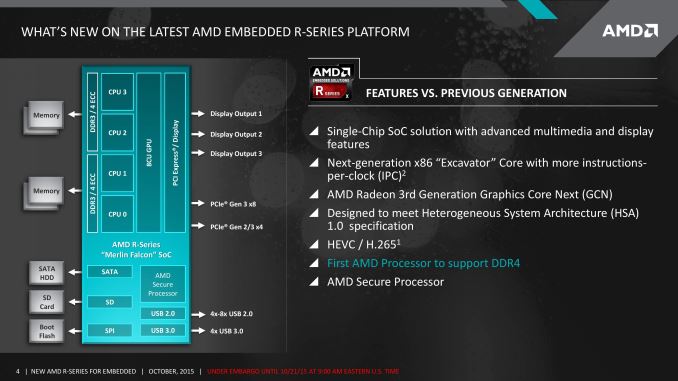 Obviously an interesting element is the DDR4 support. These are the same silicon as the laptop versions of Carrizo, which doesn't have DDR4 support and begs the question of where it went for consumers. We were told by AMD that for this platform, which is expected to have a 7-10+ year life cycle, the requirements for DDR4 were to allow their customers through the memory transition as the market shifts. Reasons as to why the Carrizo silicon in laptops are not DDR4 enabled revolve around the mix of DDR3-only Carrizo-L and Carrizo designs, as well as marketing of those parts. 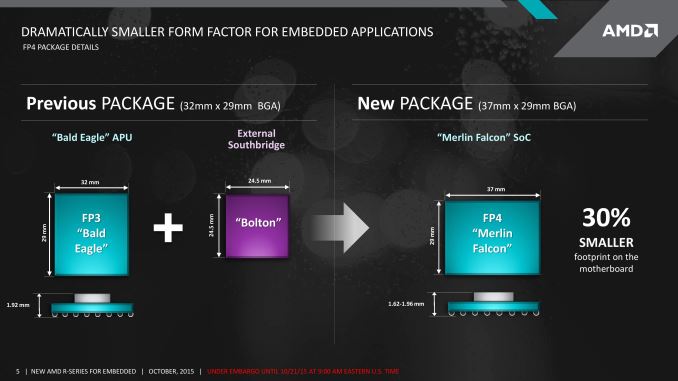 Aside from this, the new R-series brings the chipset/south bridge normally connected to provide the storage and PCIe supported onto the same silicon die as the APU. This means that the chipset is now made at the same processing node as the APU, reducing power, but it also makes power management easier as well as reducing the size of the motherboard needed for the system. AMD told us in a briefing that a number of customers have requested an overall smaller form factor for their designs, and this is here for that. 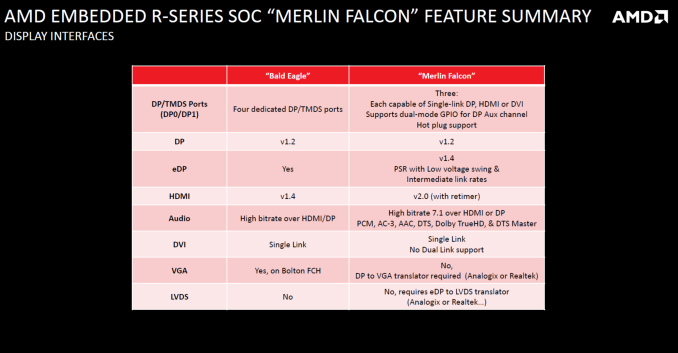 At the time of writing, the new R-series will support three displays, using a variety of connectivity. We have been told that this is the currently validated list, and other display configurations are still being tested. On the left is AMD’s ‘Bald Eagle’ platform, with R-series processors derived from Kaveri cores.

Part of today's announcement also lot to do with the Linux ecosystem surrounding the embedded market. AMD is moving its entire graphics driver stack to open source, removing the disconnect with some closed source drivers. Elements of the stack are under different open source licenses, but it allows customers to develop and distribute a custom driver kernel specific to their needs. Customers can also select part of AMDs Linux distribution platform. 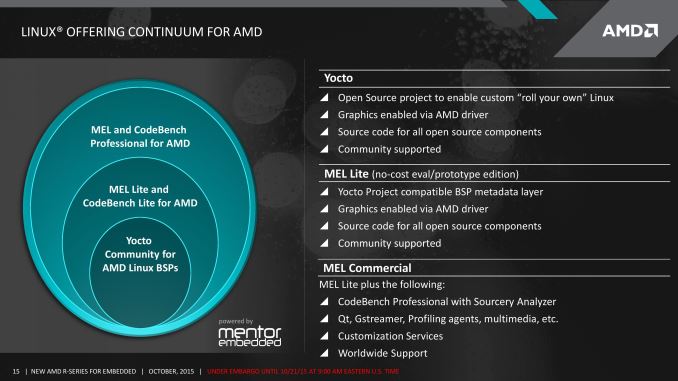 Performance for the new Merlin Falcon parts, according to AMD and running benchmarks such as 3D Mark, puts the high frequency RX-421BD APU at 15W on par with the previous generations RX-427BB (Bald Eagle, Kaveri-based) when at 35W. Customers for these parts can work with AMD and Sapphire (AMD’s long term AMD Pro partner) to obtain evaluation ‘AMD Gardenia’ motherboards. 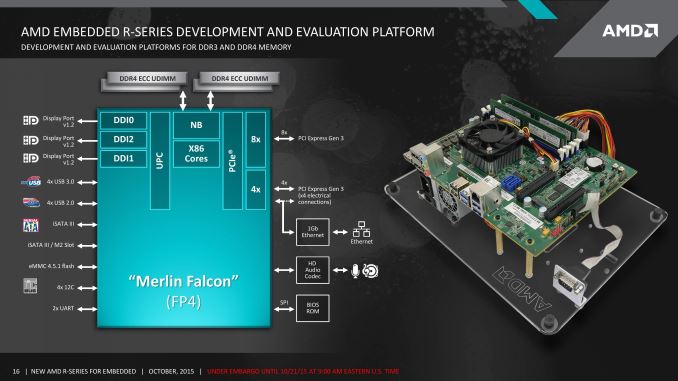 Just to be clear with these embedded parts, in AMD’s briefing to us they identified the markets they are targeting – gaming machines (poker, pachinko, etc), communication infrastructure, industrial control/automation, storage, medical, security/surveillance and retail signage. Any hopes of being able to play with DDR4 on an Excavator based platform, for the end user at least, is still an unknown. That being said, we are working with AMD to perhaps get a couple of evaluation boards to test, at least to see how DDR3 vs. DDR4 performance comes into the equation.