Club3D Releases Their DisplayPort 1.2 to HDMI 2.0 Adapter: The Real McCoy

Though we don't typically cover adapter news, this one is worth a special exception. Late last month Club3D announced their DisplayPort 1.2 to HDMI 2.0 adapter, and since then there has been some confusion over just what their adapter actually supports - a problem brought on by earlier adapters on the market that essentially only supported a subset of the necessary HDMI 2.0 specification. As a result Club3D sent over a second note last week more explicitly calling out what their adapter can do, and that yes, it supports HDMI 2.0 with full 4:4:4 chroma subsampling.

But before we get too far ahead of ourselves, perhaps it's best we start with why these adapters are necessary in the first place. While 4K TVs are becoming increasingly prevalent and cheap, it's only in the last 18 months that the HDMI 2.0 standard has really hit the market, and with it the ability to drive enough bandwidth for full quality uncompressed 4K@60Hz operation. Somewhat frustrating from a PC perspective, PCs have been able to drive 4K displays for some time now, and the de facto PC-centric DisplayPort standard has offered the necessary bandwidth for a few years, since DisplayPort 1.2. However with DisplayPorts almost never appearing on TVs, there have been few good options to drive 4K TVs at both full quality and 60Hz.

An interim solution - and where some of Club3D's promotional headaches come from - has been to use slower HDMI 1.4 signaling to drive these displays, using Chroma Subsampling to reduce the amount of color information presented, and as a result reducing the bandwidth requirements to fit within HDMI 1.4's abilities. While chroma subsampling suffices in movies and television, as it has for decades, it degrades desktop environments significantly, and can render some techniques such as subpixel text rendering useless.

Meanwhile HDMI 2.0 support has been slow to reach PC video cards. NVIDIA offered it on the high-end the soonest with the Maxwell 2 family - though taking some time to trickle down to lower price HTPC-class video cards - while AMD missed out entirely as their initial plans for HDMI 2.0 were scratched alongside any planned 20nm GPUs. Thankfully PC video cards have supported DisplayPort 1.2 for quite some time, so DisplayPort to HDMI adapters were always an option.

However early DisplayPort 1.2 to HDMI 2.0 adapters were in reality using HDMI 1.4 signaling and chroma subsampling to support 4K@60Hz at reduced image quality. As the necessary controllers were not yet on the market this was making the best of a bad situation, but it was not helped by the fact that many of these adapters were labeled HDMI 2.0 without supporting HDMI 2.0's full bandwidth. So with the release of the first proper HDMI 2.0 adapters, this has led to some confusion. 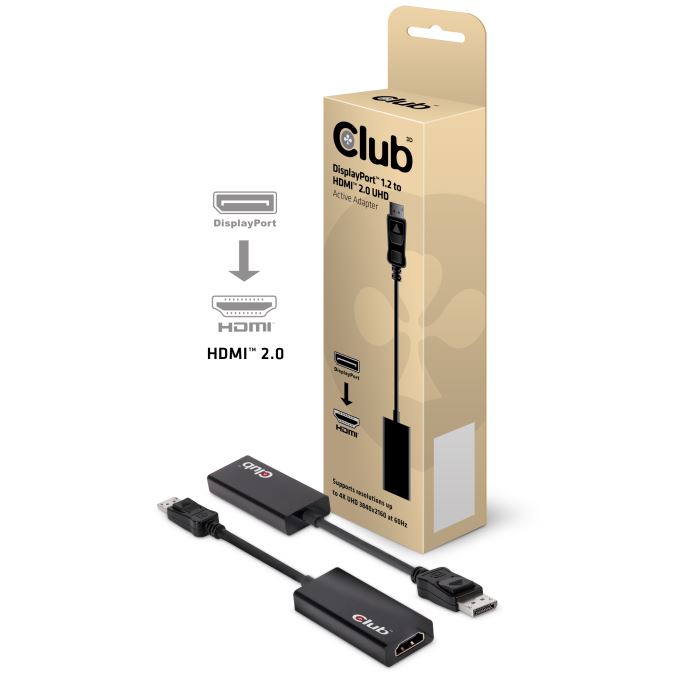 And that brings us to Club3D's DisplayPort 1.2 to HDMI 2.0 adapter, the first such full HDMI 2.0 adapter to reach the market. Club3D's adapter should allow any DP 1.2 port to be turned into an HDMI 2.0 port with full support for 4K60p with full image quality 4:4:4 chroma subsampling. After the releases of pseudo-HDMI 2.0 adapters over the last several months, this is finally the real McCoy for HDMI 2.0 adapters.

The key here today is that unlike those early pseudo-2.0 adapters, Club3D's adapter finally enables full HDMI 2.0 support with video cards that don't support native HDMI 2.0. This includes AMD's entire lineup, pre-Maxwell 2 NVIDIA cards, and Intel-based systems with a DisplayPort but not an HDMI 2.0 LS-Pcon. In fact, AMD explicitly stated support for DP 1.2 to HDMI 2.0 dongles in their recent driver update, paving the way to using this adapter with their cards.

While we're covering the specifications, it also bears mentioning that Club3D's adapter also supports HDCP 2.2. Though as HDCP 2.2 is an end-to-end standard this means that the host video card still needs to support HDCP 2.2 to begin with, as Club3D's adapter simply operates as a repeater. As a result compatibility with 4K content on older cards will be hit and miss, as services like Netflix require HDCP 2.2 for their 4K content.

Finally, Club3D will be offering two versions of the adapter: a full size DisplayPort version that should work with most desktop video cards, and a Mini DisplayPort version for laptops and all other video cards. And with a roughly $30 asking price listed today it is an attractive option when it is otherwise unreasonable to replace a video card with one that provides HDMI 2.0 in its place.